On the heavy traffic side, by the entrance to the Northern Line and where a legendary statue used to stand, Elephant & Castle is a scene of premeditated urban destruction. Fifty-five years after being hailed as the future of retail and a few months of waiting empty for the end, the Elephant & Castle shopping centre has been reduced to rubble and dust.

On the other side, all is tranquil, ordered and new. Castle Square, set between Elephant Road and the Network Rail arches and Lendlease’s ongoing Elephant Park development, is described in its marketing literature as a new place where familiar faces from the ex-shopping centre can be located – a kind of re-homed independent trader cluster within what is, perhaps dauntingly, described as “a wider retail and leisure offer”.

Faye Gomes is one of the traders referred to. Her food business, Kaieteur Kitchen, was based in the market area at the front of the ex-shopping centre for ten years. Faye lives locally and was previously a resident of Hackney. She is of Guyanese descent – Kaieteur Falls is a wonder of nature in Guyana’s Kaieteur National Park – and her food reflects that.

For a long time, she liked her shopping centre spot: she describes a wide range of different stalls and “very nice people”. Although it never quite took off as a retail destination, the building’s bowling alley and bingo hall brought welcome custom, augmenting passing trade boosted by the nearness of the Tube. “At that time everything was beautiful there,” Faye says.

Things started to slide, she recalls, from 2017 or 2018. A long discussion might be had about whether this was triggered by the emerging plans of developer Delancey to knock down the building, which was regarded both with the fondness that accrues to valiant anachronisms and the derision that comes with being dubbed an eyesore. Either way, things turned bad for Kaieteur Kitchen and its neighbour small businesses. “We had people coming in, young guys, breaking stalls, tormenting us, saying if we don’t give them food they would come and vandalise our shop.” 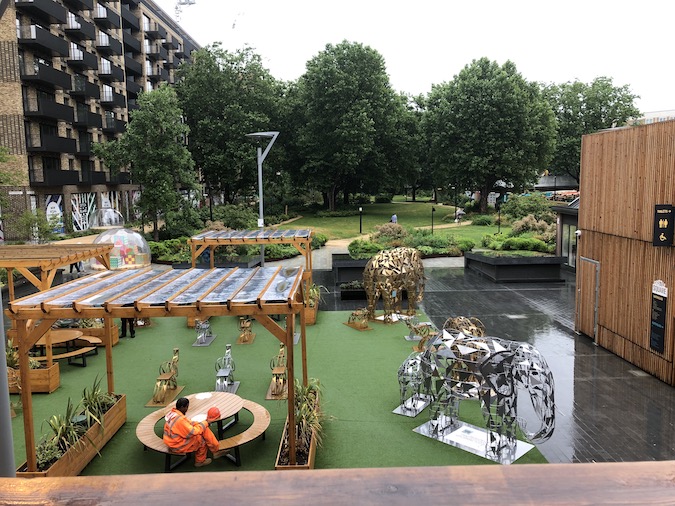 There were break-ins, there was vandalism, there was distress. “I was getting very ill and wanted to leave.” Covid came, and Faye had to shut down. When she re-opened, “nothing went right. Sales was bad and things was getting really down.” By then, arrangements were being made for her business’s relocation. “I was really happy,” she says. “I didn’t even know what I was getting until my first visit.”

The terms of Southwark Council’s planning consent for its plans to redevelop the shopping centre site into a new town centre required Delancey to provide financial support for the small businesses affected and give them first dibs on news retail units at Castle Square. Visiting, it’s hard to judge if those who’ve moved there, an assortment of food, fashion, beauty and phone outlets, have fallen on their feet. The setting, though pleasant even on a rainy day, has that slightly sterile quality characteristic of freshly-delivered urban spaces where work is still in progress.

The new buildings, which have a temporary look, are cut off from the area’s main footfall routes. But the famous Elephant & Castle statue now adorns it. And there is plainly an aspiration for the square and the adjoining length of park to be a hive of human activity.

Elephant Park has a walkway called Ash Avenue down one side, lined with retail spaces. At the far end is a new water feature called Elephant Springs (pictured below), which a contact at Lend Lease says has been packed with families when the weather has been good, with children paddling in it until dusk. A pair of patrolling security guards with knowledge of the old shopping centre said their jobs have become much easier.

And Faye? She moved into her premises in September: keys handed to her on the 24th, moved in on the 25th, opened on the 26th. Covid meant she had close the cafe again after a month and for a while it was hard going, with anxieties about paying the rent. Old customers found her, but not in large numbers.

Now though, she’s far more hopeful. She likes her new location, partly because being its being on the first floor makes her feel more secure. Though other traders are indeed concerned that it doesn’t face a busy street, Faye says that for her that’s not a problem. 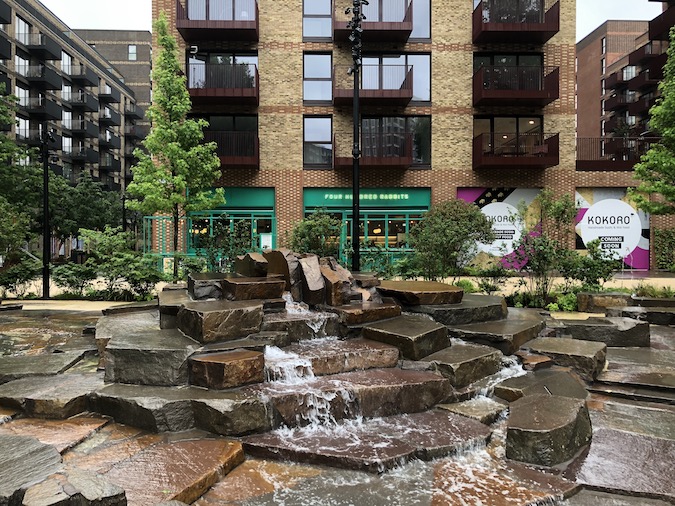 The Kitchen itself is compact, with only a small number of places to sit, but Faye’s take-away trade seems pretty brisk: “Every day I’ve got new customers coming, because I’m on the Facebook delivery, I’m on Instagram, WhatsApp. Every day somebody says, ‘oh, it’s my first time, I’ve heard about it, I’ve seen it, you know’.” Customer ratings have been good. “That makes you feel much happier to come out in the morning, to meet with people, you know.” Faye has customers across the city, even in distant Ealing. When I dropped by, she was anticipating filling a large order from Bristol.

Elephant & Castle’s redevelopment has, of course, been a lightning rod for concerns about major regeneration projects and debates about who gains from them and who does not. Does what’s been happening in this famous part of Southwark, where the Heygate housing estate once stood, constitute what Sadiq Khan calls “good growth”?

Opinion remains varied and fraught, with critics of the changes prominent. But a legal obstacle to Delancey proceeding was recently removed when an appeal by tireless local campaigner Jerry Flynn against the rejection of a previous attempt to get Southwark’s approval of the plans quashed because they did not offer enough social housing was unsuccessful.

Arguments about the merits and morality of the project will continue for long after Delancey completes its task, which will include an upgrade of Elephant & Castle Tube station and providing a new home for the London College of Communication across the road. How the future unfolds for Faye Gomes remains to be seen. But she is nothing if not upbeat: “I am confident that everything is going to come back nicely. For me, everything is going to get better.”

I left Kaieteur Kitchen with a delicious take-away. Faye’s menu is here.