You can tell there’s an election campaign brewing when politicians posit a “clear choice” between a policy approach they wish to be associated with and one they want voters to associate with their opponents. We had an example of that last week, when Sadiq Khan launched a Twitter attack on James Brokenshire, the secretary of state for housing, communities and local government.

Their disagreement was reported on ITV News. With Brokenshire about to appear on the Andrew Marr programme, the Mayor (or perhaps a proxy) posted a clip from the bulletin, which reported his riposte to remarks Brokenshire had made in the preceding days. I quote:

“The Mayor has accused the housing minister of not understanding Londoners, after he told ITV News there should be less focus on building affordable housing in the capital. Sadiq Khan says he makes no apologies for his commitment to building more low cost and social housing, but James Brokenshire claims building more expensive homes will create a healthier housing market”.

“Earlier this week, he told me to focus on luxury private apartments rather than social and affordable homes. No thanks. I’m proud City Hall started building more social & affordable homes last year than ever before. The choice for Londoners has never been clearer.” 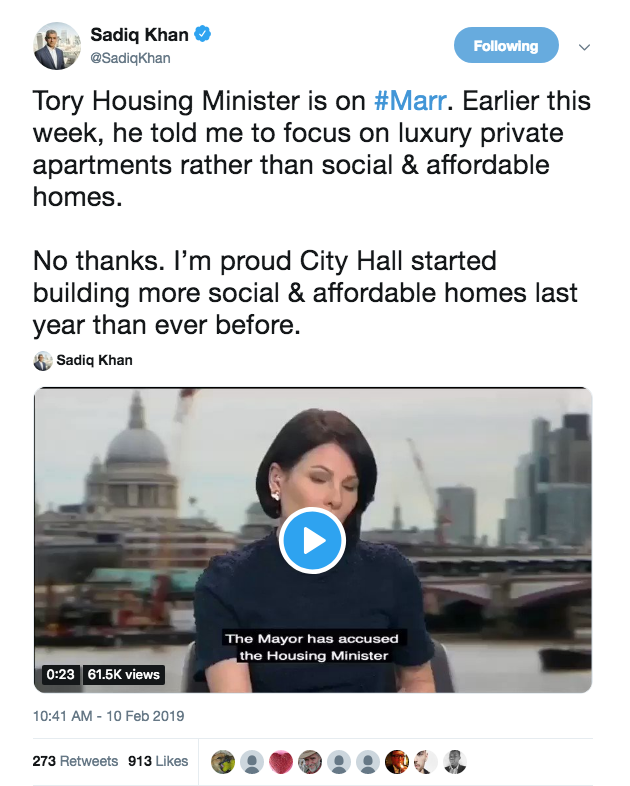 It’s worth considering the part of the ITV News report the Mayor did not post on Twitter, and which I’ve obtained a transcript of. It followed on from the part he did post and showed Brokenshire saying the following:

“The Mayor and I have common cause. We want to see more homes being built, but the Mayor’s focus is purely on the affordable side, on how we get more affordable, as I do. But the thing is, you need a healthy London housing market overall, seeing everything being built, and actually that delivers more affordable homes, and more social-rented homes as well.”

This argument from Brokenshire is the same one he made to me when I asked him at London First’s recent Building London summit if he thought the Mayor should do more to nurture building by private developers.

Mayor Khan, of course, knows this perfectly well. Why else would he have bothered introducing supplementary planning guidance saying that private developer planning applications that propose a minimum of 35 per cent “genuinely affordable” homes would be fast tracked through City Hall? Some people think 35 per cent a bit high – Sir Mark Boleat, for example, has suggested 30 per cent – but the principle of helping private development along if it meets a viable “affordable” threshold is common ground.

The other thing to keep in mind is that affordable homes delivered through the planning process in this way, with the trade-offs initially conducted at borough level, are separate from those the Mayor supports with funding and built by housing associations and councils – funding provided by the Tory national government, by the way. They are different streams of affordable supply. Part of Brokenshire’s claim is that if the Mayor would be more helpful to private developers, they would build more homes overall, including more affordable ones, on top of those he helps to fund himself.

Brokenshire may or may not have a point. His remarks echo a complaint sometimes made in developer circles that they would invest with more confidence if Mayor Khan was more conspicuously on their side. In response, the Mayor would probably say that the 35 per cent threshold approach was formulated in close consultation with them largely to provide them with the kind of certainty about the planning process they desire.

But what the Twitter tiff shows us is that such subtleties go out the window when political advantage is at stake – even more than a year before the 2020 mayoral election. It is also a reflection of how deeply embedded populist mantras about housing have become at the expense of understanding and productive debate.

In reality, the stark opposition so often presented between private “luxury flats” and “affordable” homes is largely a false one – a polemical over-simplification that conceals the truth that a large proportion of London’s new affordable housing only gets built because “luxury flats” get built as well. It may be a galling, unsatisfactory truth, but it’s the truth just the same.