Skip to content
The focus could be shifting towards domestic matters, with marked differences between the Inner and Outer boroughs
Michael Clemence

Pity the pollsters: while 2019 was a politically momentous year, those of us asking Britons what they consider to be the biggest issues facing the country have faced a far more predictable outcome. Looking across the twelve waves of the Ipsos MORI Issues Index asked in 2019, it is very clear that just two issues – Brexit and the NHS – dominated the public mind.

Londoners have been no different. Fully six in ten of those we spoke to over the course of the year told us that Brexit was a big issue for the country, not far off the national average of 65 per cent.

However, there have been some interesting nuances for London-watchers. The NHS was less of a priority in the capital: three in ten Londoners mentioned it as a worry, well below the British average score of 40 per cent. Instead, Londoners were slightly more likely than the average Briton to mention a host of “secondary” issues, including crime, housing, education, poverty, the economy, pollution and climate change. 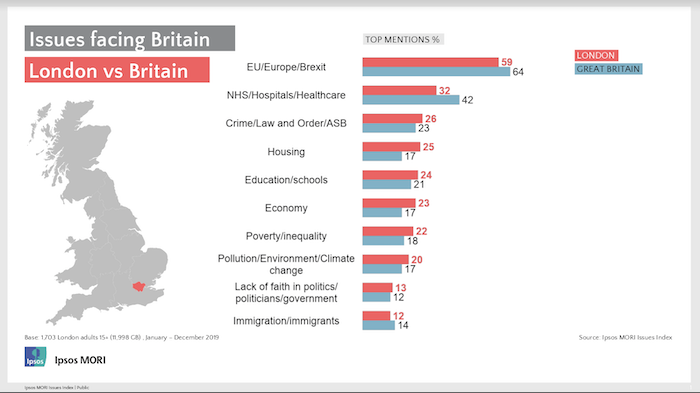 What our data also tells us is that the gap in attitudes between those living in Inner and Outer London was as wide – and possibly wider – than the differences with those living outside of the capital.

When we look at Inner Londoners only, the level of concern about Brexit shoots up to 67 per cent: as a standalone region, it would be the joint-third most concerned, level with south east England and behind only the north east (70 per cent) and south west (71 per cent). The NHS remains second, but behind it we see elevated worry about poverty, education and climate change. Central Londoners are among the most likely to mention environmental worries as an issue, second only to those living in south west England.

By contrast, Outer Londoners showed a level of concern about Brexit that was lower than any region in Britain. Although concern is still high, its score of 55 per cent puts it behind the least concerned region – the West Midlands (58 per cent). Instead, crime and housing are the major concerns: concern about crime in the outer ring was eight percentage points higher than it is in the centre of London, while the difference on housing stood at nine points. At the foot of the top ten issues we see race relations and drug abuse appear as concerns for Outer Londoners. Just five per cent of all Britons mentioned race relations as a big concern in 2019, so the level in Outer London suggests this topic has greater resonance for some residents living in London’s fast-changing outer boroughs. 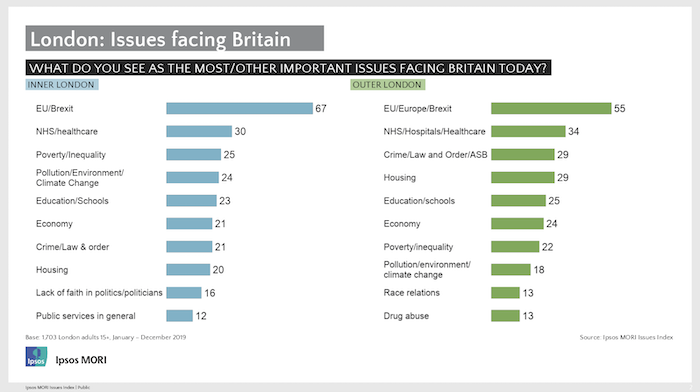 What next? Despite Brexit’s dominance of Londoners’ worry lists, the December Issues Index of 2019 – conducted over the course of the general election – hints that change is afoot. In the final month of last year the NHS overtook Brexit as Londoners’ biggest worry, capping a two month period in which the proportion of the capital’s residents worried about the NHS skyrocketed from 23 per cent to 48 per cent.

In the new decade, we may see Brexit concern to begin to ebb, while other public service concerns rise. The first Issues Index of the new decade provides our first, tentative, data point: in London, Brexit is still the top issue but poverty and inequality sits second, alongside the NHS and ahead of pollution/environment. While the sample size is small, we may see these issues, along with crime and education, define the major concerns of Londoners in the run up to the mayoral election on 7 May. 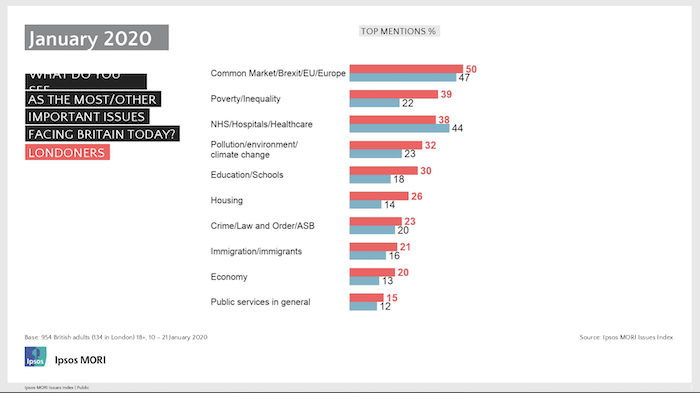 Added to perennial London issues such as housing and poverty, these changes suggest that the Londoners’ priorities might look quite different by the time of the elections. Rather than the last few years’ pre-occupation with national and international politics, the focus is likely to be on issues far closer to home – public services, pollution, and crime.

London.co.uk is committed to providing the best possible coverage of London’s politics, development, social issues and culture. It depends on donations from readers. Individual sums or regular monthly contributions are very welcome indeed. Click here to donate via PayPal or contact davehillonlondon@gmail.com. Thank you.