Skip to content
Caution is advised, but the capital might be showing the country the way to reduce the spread of infection
Richard Brown

Coronavirus has not been good news for fans of cities. How ever important urban centres will be to the recovery, the rapid spread of the pandemic from Wuhan to Milan and from London to New York revives deep-rooted suspicions of them as close-packed seedbeds for disease (“pestilential human rookeries” in the words of one Victorian pamphleteer) and as the stomping grounds of rootless cosmopolitan types, with lifestyles and habits remote from the more “authentic” concerns of their provincial countrymen.

The early spread of coronavirus in London probably played up to both stereotypes, reflecting both density and connectivity. Reported cases of infection first soared in Kensington & Chelsea. By 10 March, 14 per cent of London’s known cases were among residents of the borough, who account for just 1.8 per cent of London’s population. Kensington & Chelsea is one of London’s most densely populated boroughs, but also one of the most cosmopolitan: nearly half of its residents were born outside the UK, and research by transport campaigners suggests they are the country’s most frequent flyers. For good and ill, London is the UK’s gateway to the world.

In the following days, cases surged in Camden, Westminster, Lambeth and Southwark (as well as Barnet). Central London’s intensity of movements and interactions probably played a role here. With a day time population that grows by 80 per cent every day and intensive mixing on public transport, in offices and in pubs, the conditions for rapid spread were in place in the city centre.

By mid-March, the epidemic was spreading fast across almost every London borough, with reported cases growing by a third every day in the week of 16 March, while they grew by a fifth to a quarter across the rest of England. The newspapers were full of talk of a lockdown being imposed on the capital.

The restrictions imposed by the government at the end of that week were nationwide rather than restricted to London, but their effect appears to have been strongest here. The rate of increase in cases dropped sharply and has remained lower than in the rest of England’s since then, as the graph below shows. Over the past week, the growth in new cases appears to have slowed nationwide, but remains lower in London: in the capital it grew by an average of nine per cent over the three days to 4 April, compared to an average of 14 per cent in the rest of the country. 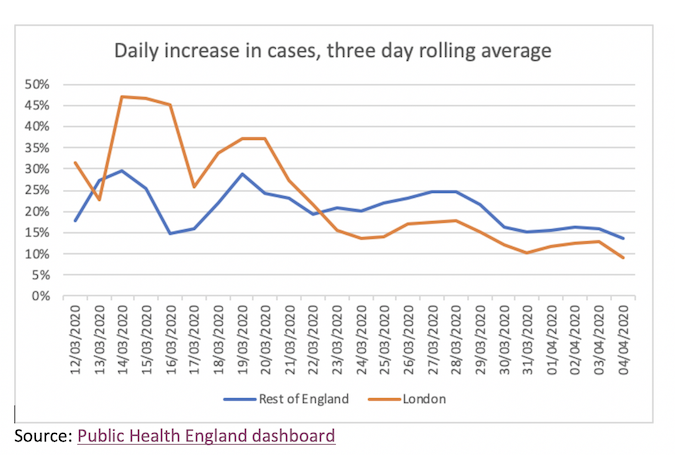 There are all sorts of reasons not to get over-excited about these numbers. At best, they show that the disease is spreading more slowly. There are still hundreds more cases every day even in London, and that will translate to more deaths in the days and weeks to come. And it is quite possible that the slowdown has only been temporary, with a resurgent outbreak waiting in the wings.

But it is still worth considering why London has fallen back from the forefront of the epidemic’s spread. Are fewer tests being done in London? This is possible, but since mid-March testing has been undertaken for all patients requiring hospital admission, so the slow down in cases presumably reflects a slowdown in hospitalisations.

Maybe this is a result of London’s age profile. Londoners’ median age is 35 years, compared to 40 across the UK. Perhaps, after the initial surge, this relatively youthful population is being reflected in correspondingly slower growth in the number of serious cases. Or maybe Londoners, despite crowded housing conditions and continuing denunciations from the media, are actually sticking to the government restrictions and starting to suppress the spread of coronavirus: figures on transport use at the end of last month showed the steepest falls were for use of the Tube, compared to road travel and national rail.

Despite the tough weeks ahead, apparent slow-downs in infection rates in London and across England are good news. And if London can further stifle the spread of the disease, it may yet show how cities can be at the forefront of recovery as well as of infection.

OnLondon.co.uk is doing all it can to keep providing the best possible coverage of important London issues during the coronavirus crisis. It now depends more than ever on donations from readers. Individual sums or regular monthly contributions are very welcome indeed. Click here to donate via Donorbox or contact davehillonlondon@gmail.com. Thank you.