Skip to content
You might think stability and continuity would be watch words in uncertain times, yet the next 18 months could see turbulence continue in the capital's local government
Robert Gordon Clark & Tony Travers

They say buses have a habit of coming either not at all or in groups, although right now, if they do, they aren’t that busy. And in the last few months, no less than four local authorities in London have seen a change in political leadership.

First, the leader of Southwark, Peter John, stepped down after 10 years in charge, also triggering a change in the leadership of London Councils (more on that later). He has been replaced by Kieron Williams.

Then another long-standing leader, Stephen Alambritis of Merton, announced he would step down, also after 10 years in charge, and his successor, Mark Allison, was formally elected on 18 November.

Soon after that Croydon’s Tony Newman, announced his departure after six years as council leader and 15 as leader of the local Labour group. He has been succeeded by Hamida Ali.

Finally, the longest-standing leader of them all, Ray Puddifoot of Hillingdon has announced he will be stepping down in January 2021, after a remarkable 21 years.

That’s four men who between them have spent 46 years running those four councils.

While that is quite a bunch of changes in a short space of time, they follow a larger number of new borough leaders since the last local elections in May 2018. In that period – and as per the table below – 15 councils have seen a change of leadership. Puddifoot’s departure in the New Year, will mean that half of the 32 boroughs will be led by leaders who haven’t yet fought and won a local election in that capacity.

Interestingly, this period has seen the number of female leaders hold steady at 11, though we have seen a welcome doubling of leaders from ethnic minority backgrounds, from four to eight. 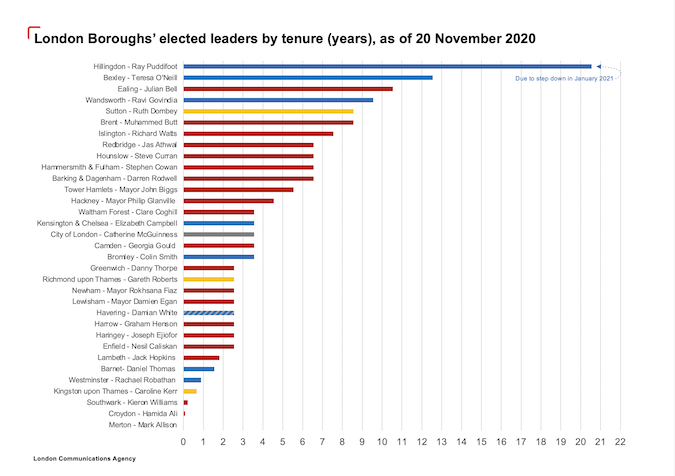 However, the many recent departures are but one measure of the churn currently taking place in London local government. There have also been a number of borough leadership challenges over the course of 2020.

In Kingston-upon-Thames, an internal “coup” led to a change of leadership in the early days of the pandemic, with Caroline Kerr replacing Liz Green.

The long-standing leaders of Brent (Muhammed Butt), Ealing (Julian Bell) and Wandsworth (Ravi Govindia) are understood to have survived challenges, in the case of Butt quite comfortably in September, but in the case of Bell by one vote only in October.

In both Newham and Tower Hamlets, two of London’s four directly-elected Mayors are aiming to hold referendums next May that could replace their governance model with a Committee and Leader and Cabinet model respectively (in Newham, a legal case is being considered which might result in the Leader and Cabinet model being the alternative offered insetad)

And by a quirk of political irony, Conservative-backed campaigns in Croydon and Hammersmith & Fulham are pushing for the reverse, a referendum to adopt the directly-elected Mayoral model.

Finally, Peter John’s departure in Southwark has led to a change in the leadership of the boroughs’ umbrella body, London Councils. Camden’s Georgia Gould, now getting close to “veteran” status with nearly four years under her belt, has succeeded him, with Barking & Dagenham’s Darren Rodwell, seven years in charge of his borough, as deputy chair.

Exhausted? Well, we are trying to keep up with all this too.

So why all the changes?

Well, astute London political commentators would probably agree that there is no single common factor and, anyway, with 33 local authorities in London (including the City Corporation), you can expect changes quite regularly.

Longer-serving leaders face pressure to accept that it is “someone else’s turn” and this is often linked to the concept of “a tired narrative.” It is almost inevitable that, over time, any leader will fall out with quite a few of his or her fellow councillors and other party members, making loyalty a perishable resource.

Then there are events. The most significant, tragic, occurrence in recent years in London was the 2017 Grenfell Tower fire, after which the leader of the Royal Borough of Kensington & Chelsea (RBKC), not surprisingly, resigned.

More recently, the challenge in Ealing was, in part, linked to the introduction of Local Traffic Neighbourhoods (LTNs) and the reaction from local residents and ward councillors. LTN’s have been a source of concern in Govindia’s Wandsworth and elsewhere too.

But both leaders are also long serving – Bell for 10 years and Govindia for nine.  Despite winning five local elections between them, loyalty only goes so far. And in cases where the main party is very dominant, with little effective opposition, there is inevitably a risk that factionalism within that party will grow.

And then there are opportunities. In the case of Westminster, one arose for Nickie Aiken to stand for Parliament and she is now the MP for half of that borough, which is now led by Rachael Robathan.

Lib Peck, meanwhile, moved from Lambeth to City Hall to lead on violence reduction for the Mayor. Jack Hopkins took her place.

Another issue is timing. The next local elections are only 18 months away.

In the case of Wandsworth the Conservatives only just held on in the 2018 local elections, winning 33 seats to Labour’s 26 (and one Independent). The Tories received less of the borough’s votes overall than Labour, and in 2019’s general election they lost the parliamentary seat of Putney – Labour’s only gain in the whole of England.

Assuming, in line with recent polling, a Sadiq Khan victory next year in the London Mayor race, continuing growth in support for Keir Starmer, and the impact of Covid and Brexit potentially damaging Tory credentials in general, Wandsworth will again be a prime target for Labour. The experienced Govindia has won before, so perhaps he is the better bet than a new face and fresh approach?

In Ealing’s case the issue is not so much about holding on to control of the borough – Labour have a massive majority, built up over three local elections stretching back to 2010. The issue here is more about the style of leadership and the impact of some policies on key swing wards currently held by Labour councillors who want to win those seats again in 2022.

And what about Hillingdon? Home to both the Prime Minister’s constituency and that of the former shadow chancellor, this borough has a classic north-south divide. But Labour hasn’t won the council since 1994-98, when almost all of London bathed in a pre-Blair government glow and the party currently holds only a third of the council’s seats. Could Labour win Hillingdon in 2022? Or will a new Conservative council leader stave off such an advance? He or she will have a good 15 months to get their narrative straight.

Much of the attention in the coming months will be on the rest of London’s Tory boroughs. Puddifoot’s stepping down will make Bexley’s Teresa O”Neill the longest serving leader in London. Last week, the borough reported significant financial challenges. Could we see an end to 20 years of Conservative control there? Probably not, as Bexley appears to be getting more pro-Tory over time and the party currently holds 34 of the 45 council seats.

In Barnet, Daniel Thomas has only been in charge for two years. But will the arrival of Keir Starmer as the Labour’s national leader allay local concerns over antisemitism in his party, which clearly cost Labour votes in 2018? If so, it could mean Barnet going to outright Labour control for the first time ever.

And while the RBKC may be out of Labour’s reach this time around, the other Tory “crown jewel”, Westminster, remains a target. Both boroughs are run by relatively new leaders. How will they handle the cut and thrust of the local election campaigns?

But it’s not all one-way traffic. Back to Croydon. Historically this has been a swing borough, with one of the safest Labour constituencies, Croydon North, one of the safest Tory constituencies, Croydon South, and the marginal Croydon Central. With all the issues around Labour’s management of its finances (a Section 114 notice having recently been issued), coupled with ongoing concerns about the impact of some large scale development, could this be a surprise win back in 2022 for the Tories, who last held it between 2010 and 2014?

Much is still to come and before then we have the small matter of the mayoral and London Assembly elections. Other delayed 2020 elections, combined with the local and sub-national ones that were already due, means that 6 May 2021 is one of the biggest plebiscite days ever seen outside a general election or national referendum – a “super Thursday.”

Next May’s elections will therefore generate many pointers about May 2022, and no doubt further changes between now and then. Closely watch the borough AGMs next May to see how confident local activists are. The political years 2021 and 2022 will be big for London.

Robert Gordon Clark is the founder and chairman of London Communications Agency and Tony Travers is LSE Department of Government Visiting Professor and Director of LSE London.