The Conservative candidate for London Mayor has said he will increase Transport for London public transport fares if elected next May, claiming that Sadiq Khan’s four-year fares freeze has prevented investment in new transport capacity.

Speaking to members of the London Chamber of Commerce & Industry at the Tower Bridge Hilton this morning, Shaun Bailey described a fares hike as, in any case, “I think, a done deal” as it is already “pencilled in” to TfL’s assumptions about its future finances for after the election.

However, Bailey said he would retain the Hopper fare introduced by Mayor Khan, which enables people to make an unlimited number of journeys by bus or tram within a one hour period for the price of a single fare.

Bailey characterised Khan’s freeze as “bogus”, saying the Mayor had given the misleading impression during the 2016 mayoral election campaign that all public transport fares would be frozen when in reality his powers extend only to services run by TfL. Even so, he claimed lack of progress towards extending Tramlink services to Sutton, extending the Bakerloo Line and other TfL projects can be attributed to the freeze.

TfL’s current business plan, covering the period from 2019 to 2024, assumes the freeze is maintained until 2020, but that fares “could rise by around RPI [the retail price index inflation measure] plus one per cent to support vital investment in public transport” from January 2021. (on page 50, image below). The final decision on levels of fares rests annually with whoever is Mayor. 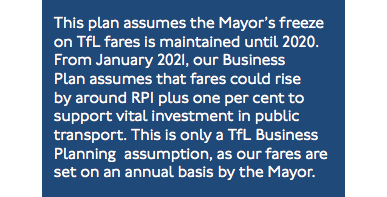 Asked by On London if he considered former Mayor Boris Johnson’s approach to delivering Brexit is helping his campaign, given that London voted by a margin of 60-40 to Remain in the European Union, Bailey said that “Boris’s approach to Brexit is Boris’s business” and stressed the importance of being able as a politician to “represent people who do not believe what you believe”.

Bailey characterised mayoral responsibilities as “practical stuff – this is delivery, delivery, delivery”. During his opening address he acknowledged that “Brexit is important” and re-stated his preference for the UK leaving the EU with a deal, but made clear his view that “the Mayor of London can do nothing about Brexit”, pointing out that those making decisions about it “sit in Westminster”.

He criticised Mayor Khan for talking about Brexit too much instead of concentrating on the things he can directly affect, saying he is “focussed on what London needs” citing challenges that “pre-date Brexit and will exist long after Brexit.” Bailey listed the main jobs of a London Mayor as delivering homes, making London safe, cleaning up the environment, sorting out transport and making London “the best place to start and grow a business and raise a family”.

Naming crime as his first priority, he said that every part of London he has visited in his campaign “talks about crime” and the need for someone to deal with it. “A London where people are stabbed in broad daylight is bad for Londoners and ultimately bad for business. From me you won’t get excuses as to why I’m not doing the job properly,” he said, accusing Khan of dodging his responsibilities.

On housing, he defined the task as “delivering appropriate housing in appropriate numbers, for Londoners” and characterised the impact on employees of high rents and house purchase prices as “a major attack on our competitiveness in London” which his “Housing for London” approach to using mayoral powers and resources would address.

Bailey said the Ultra Low Emission Zone, introduced by Khan a year sooner than Mayor Johnson, he who devised it, had intended to do, has been “implemented badly”, and that the proposed extension of the zone beyond its current congestion charge zone boundaries to the North and South Circular roads “will mean devastation for small businesses” and not even deliver an improvement in air quality.

“It will make the North Circular even dirtier than it is now” and “cut many a community in half,” Bailey maintained. This would be because “many of the poorest people will have to pay to drive across the North Circular go to school or go to hospital.” He proposed that the resources required should instead be spent “to green, to electrify, our entire bus fleet”. He said this would be “the equivalent of taking a million cars off the road” in terms of polluting emissions.

Bailey said the biggest difference between himself and other mayoral hopefuls is “That I believe in wealth creation” and that this was the key to getting young people in particular into jobs and giving them opportunity. He described the careers advice many young people receive as “very poor” and said the apprenticeship levy raised in London should be kept in the city, rather than redistributed elsewhere. “If you have a job, the prospect of a job, the prospect of a career, being dragged into a local gang is that much further away from you. Your business activity, is part of my social issue.”

Responding to Bailey’s comments on raising fares, a spokesperson of Sadiq Khan did not rule out a post-election fares increase but said: “Londoners can trust Sadiq on fares as he’s kept his promise to freeze them for four years, but you will have to wait and see the manifesto, which will be published next year”.

OnLondon.co.uk is dedicated to providing fair and thorough coverage of London’s politics, development and culture. It depends on donations, including from readers. Could you spare £5 a month to held the site keep going and growing? If so, follow this link. Thank you.