Skip to content
It sold just about everything, but especially toys and sports equipment, and took pride in offering lower prices than all the competition
Victor Keegan

In September 1930 a big new department store opened in Oxford Street with a frontage over 100 yards wide. The Observer reported that it received over 100,000 visitors on its first day and was “immensely popular”, but within a few months it had closed down, making it one of the biggest retail failures on record. The surprising thing was that it was a branch of Gamages, which for many years had run a highly successful department store of a very different kind well away from the West End in Holborn.

Gamages was started by Albert Walter Gamage who, in 1878, at the age of 21, rented a small hosiery shop at 128 Holborn and ended up owning most of the block from Leather Lane to Hatton Garden.

From the very start, his policy was to sell everything cheaper than anyone else, offering practically everything a typical customer would need for less than competitors could afford. A good early example was a hair brush with wire bristles, which was priced at one shilling and sixpence (0.09 pence) when at other places they were two shillings and sixpence (0.13p).

Gamages had a large number of departments assembled, it must be admitted, in a rather ramshackle way. They included hardware on the ground floor, photography, camping, pets, a huge toy area and lots of sports equipment. By the end of the 19th century Gamages purported to be the “world’s largest sport and athletic outfitter“. They were particularly proud of their horology section, claiming that each timepiece for sale had undergone rigorous testing at every stage of production. 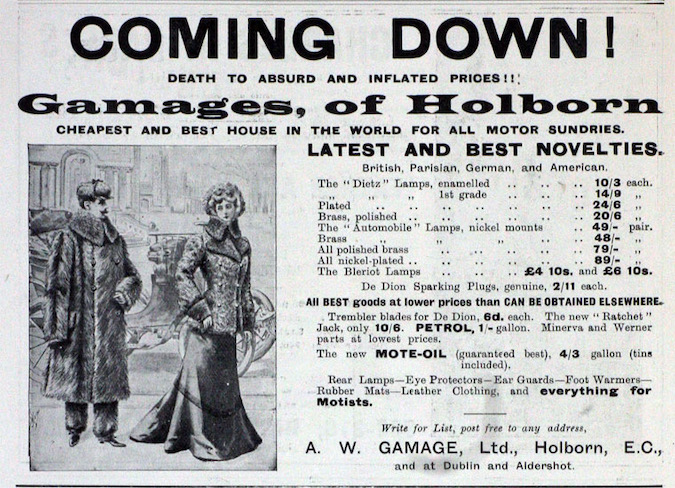 You could buy a car in the motor department – where the body of Albert Gamage apparently lay in state upon his death in 1930 – or choose a cheap bicycle from the dizzying number on display or from the Gamages catalogue that sometimes had as many as 1,300 pages, with a lion’s share devoted to bikes. The store had a conjuring section too, which I remember visiting as a boy.

The Holborn store continued trading despite the disastrous Oxford Street venture, where the accent was on premium fashion and women could talk to their friends by telephone while having their hair done. Afterwards, they might go to the store’s 400-seater restaurant or to its roof garden to play miniature golf. But it was launched at the start of the Great Depression and Simon Marks of Marks and Spencer next door decided to keep all his prices below five shillings – a killer blow.

The final irony is that the site of that stillborn West End Gamages is now occupied by – wait for it – Primark, a hugely successful latter day iteration of the cut-price model the Holborn Gamages pioneered. That original Gamages finally closed in 1972. It was one of the first real department stores and a revered household name.

This article is the 15th of 25 being written by Vic Keegan about locations of historical interest in Holborn, Farringdon, Clerkenwell, Bloomsbury and St Giles, kindly supported by the Central District Alliance business improvement district, which serves those areas. On London’s policy on “supported content” can be read here.