The rock musical Grease is currently playing at the Dominion Theatre at the junction of Oxford Street and Tottenham Court Road. It is the latest in a roll call of hits at this establishment, which  includes South Pacific, which ran for over four years from 1958, We Will Rock You (12 years from 2002), Cleopatra, Porgy and Bess and, of course, The Sound of Music to name but a few. Most of the Dominion’s many punters are likely to be unaware of a major incident that took place on the site many years before the theatre was there.

It would have been comic had it not been so tragic. The Great London Beer Flood occurred on 17 October 1814 at the Horseshoe brewery (pictured above), owned by Henry Meux of the Meux brewing dynasty. It happened when the corroded hoops of a vat standing over seven yards high triggered the explosive release of over a quarter of a million gallons of maturing porter, a favourite tipple of working men and street porters, whose name is derived from it.

The resulting torrent of beer did severe damage to the brewery’s walls and caused several heavy wooden beams to collapse, before raging on to hit a tightly packed area of squalid houses nearby. Eight women and children were killed. It would have been much worse if the accident had happened later in the day after other residents had returned from work.

Martyn Cornell, who has researched the incident, says that most if not all of those who died were poor Irish immigrants, part of a mass of people living in the slums around the infamous St Giles rookeries, which were later cleared away when New Oxford Street was built. It is known that many of those living in cellars had to climb on to their furniture to avoid the flood.

There were stories at the time of people partying on the freak availability of free beer. Very few of these have been authenticated, although 20 years later an anonymous American visitor who had been walking along New Street, one of the most affected areas, wrote: “All at once, I found myself borne onward with great velocity by a torrent which burst upon me so suddenly as almost to deprive me of breath. A roar of falling buildings at a distance, and suffocating fumes, were in my ears and nostrils. I was rescued with great difficulty by the people who immediately collected around me.” 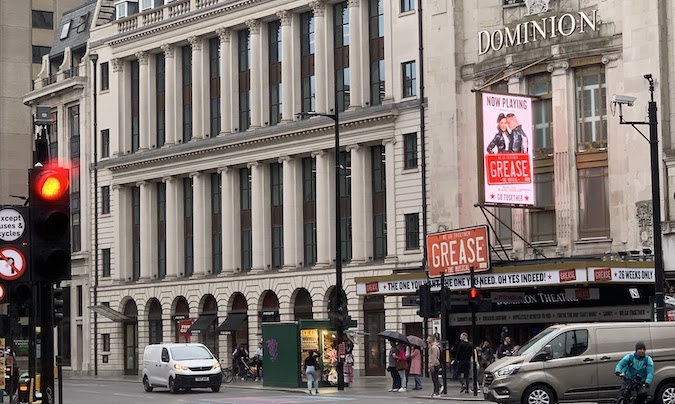 The construction of New Oxford Street attracted new industries to the area. One of the catalysts of change was the celebrated impresario Charles Morton who in 1852 had opened the trend-setting Canterbury Music Hall on Westminster Bridge Road in Lambeth, adjacent to the Canterbury Tavern.

Five years later, in direct response to Morton’s success, Edward Weston and his father Henry opened a music hall on the site of the Six Cans and Punch Bowl Tavern on 242-245 High Holborn, close to the Horseshoe brewery. Morton responded in 1861 by taking over the former Boar and Castle pub, which stood directly opposite the Horseshoe on Tottenham Court Road. It was called the Oxford Music Hall because of its proximity to Oxford Street. The Westons opposed this plan on the grounds that there were too many music halls in the area already, but were unsuccessful in their appeal.

Morton’s new establishment became one of London’s most popular music halls, featuring stars such as George Robey and Marie Lloyd, with some of the acts being moved by coach to the Canterbury between performances. The Times noted that it was “the latest development on a grand scale of a species of entertainment now in great favour with the public”.

In 1922 the Horseshoe Brewery was demolished and the Oxford Music Hall closed four years later. But in 1928 the Dominion opened, as one form of musical entertainment replaced another. Over the road, the site of the Oxford is where the first Virgin megastore was briefly located and, more recently, the home Primark. That’s life.

This article is the 22nd of 25 being written by Vic Keegan about locations of historical interest in Holborn, Farringdon, Clerkenwell, Bloomsbury and St Giles, kindly supported by the Central District Alliance business improvement district, which serves those areas. On London’s policy on “supported content” can be read here.