In order to get to this bit of Lost London you would, until quite recently, have had to pass through a part of Cambridgeshire. That is because it was not only owned by the bishops of Ely, whose London establishment it had been for centuries, but also an enclave within their diocese which therefore fell with the county they came from. Though physically inside London, it was not within the city’s jurisdiction.

Even today you have to pass by a gatehouse, watched over by a beadle before entering a time warp of Ely Place – still a private street, where stands St Etheldreda’s church, which was built next to the bishops’ residence, Ely House. It is one of the very oldest buildings in London and the oldest Roman Catholic church in England. Also there is Ye Olde Mitre tavern, perhaps the most hidden pub in the capital. It was licensed by Cambridgeshire until the 1960s.

The church is one of the very few medieval structures in London surviving from the reign of Edward I (1274-1307). Nearly all of the walls and the crypt beneath – where you can still see the original beams on the ceiling – are very old. 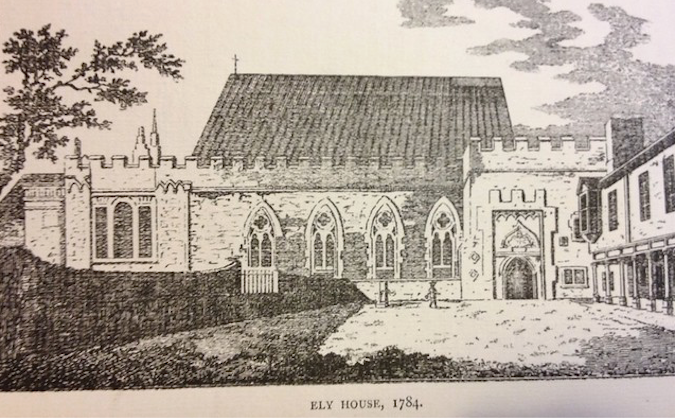 It was Ely House where Shakespeare gave John Of Gaunt (who lived at Ely Place when his palace in the Strand was burned down during the Peasants’ Revolt) one of the finest speeches in the English language. It is the oration in Richard II, the first lines of which are known by heart by many English speaking people.

“This royal throne of kings, this scepter’d isle,

This Earth of majesty, this seat of Mars,

This other Eden, demi-Paradise,

This fortress built by Nature for herself,

Against infection and the hand of war,

This blessed plot, this Earth, this realm, this England”

Medieval chronicles mention the cloister and the gardens of St Etheldreda’s, saying how wonderful they were with their fields of saffron and strawberries. These are mentioned in Shakespeare’s Richard III, when the Duke of Gloucester says to the Bishop of Ely:

“When I was last in Holborn,

I saw good strawberries in your garden there,

I do beseech you send for some of them.”

Ye Olde Mitre is hidden behind the church and only accessible through narrow alleyways (one from Hatton Garden and the other from Ely Place)  Built by Bishop Thomas Goodrich in 1546 as a place to feed his workers, it has been heavily reconstructed, but some pub buffs regard it as a candidate for the oldest pub in London. 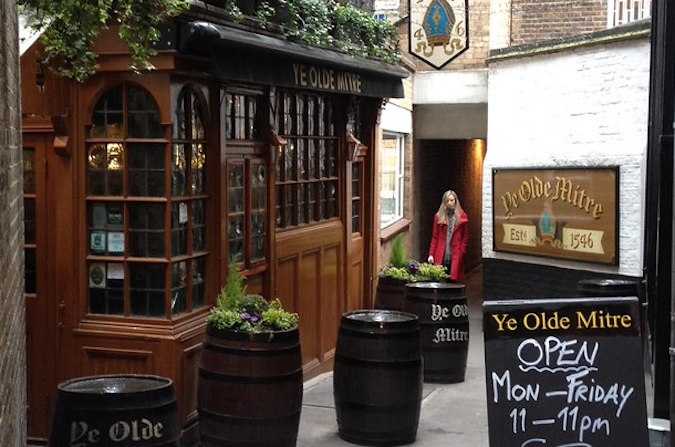 In the right hand corner of the small bar there is part of what is claimed to be a cherry tree around which Queen Elizabeth I is said to have danced, and which also marked the boundary between the garden of Sir Christopher Hatton, one of Elizabeth’s favourites, and that of the Ely bishops. Why not!

The previous 100 instalments of Vic Keegan’s Lost London can be found here.