Skip to content
It is packed with London history, yet many Londoners don't even know it's there
Victor Keegan

There is a lost island in Central London that hardly anyone knows about, including many of those who live or work on it. Meet Thorney Island, formed in ancient times by the convergence of the Thames with the River Tyburn, on which Parliament, Westminster Abbey, the old Royal Palace and Westminster School stood, making up surely the densest concentration of “history” anywhere in the country.

All but the palace – which Henry VIII moved a short distance north to Whitehall – are still there. So is the Tyburn, which rises on the Hampstead hills and meanders under Mayfair and Green Park down to Buckingham Palace, where it bifurcates, one leg leading towards Vauxhall Bridge and the other to Westminster and the lost island we’re discovering here.

The Tyburn has long since been absorbed by Sir Joseph Bazalgette’s amazing sewer system, but some of its waters still reach Thorney Island via the sewers, especially after heavy rainfall, before being channelled through interceptors, which take it downstream to the East End for treatment. No traces of the Tyburn reach the Thames at Westminster, but a few hundred yards west of Vauxhall there is an outlet to it, which takes surplus storm water the sewers can’t cope with.

Thorney Island was where the first parliaments met, in the chapter house of the Abbey and in the monks’s refractory. Remnants of the refractory wall can still be seen – photograph below – if you peer out of the window in the upstairs section of the Abbey’s cellarium café (which was once the monks’ wine cellar).

Another gem of Thorney Island is the Jerusalem Chamber – part of the dean’s private quarters. It can be seen peeping up behind the Abbey gift shop. It was there that much of the hugely influential King James Bible was written, and where Henry IV died, both in reality and in Shakespearean fantasy. 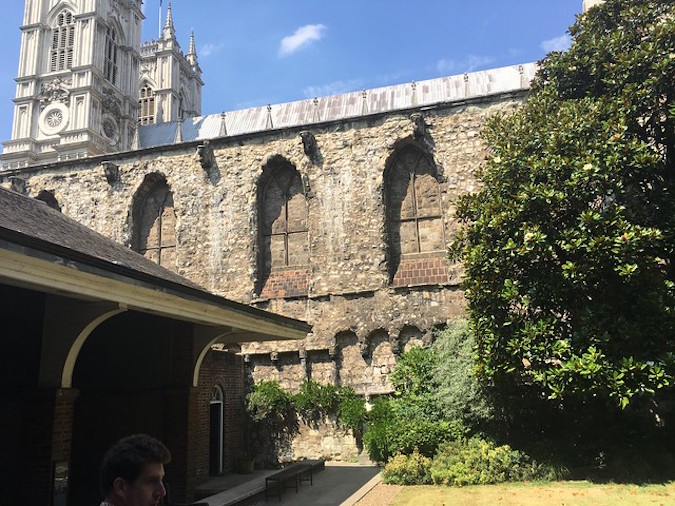 Every monarch since the William the Conqueror has been crowned in the Abbey,  where many of them now rest in sepulchral splendour. There was once some kind of Roman structure on Thorney Island, but the authenticated origins of the Abbey are from the late 10th century, when St Dunstan and King Edgar founded a community of Benedictine monks on the site.

Thorney Island was also home to the Cotton Library, a collection of manuscripts owned by the antiquarian Sir Robert Bruce Cotton, which was kept in Ashburnham House, nowadays a part of Westminster School. Cotton’s collection later formed the basis of what is now the British Library, and is still kept there today.

Westminster School itself has produced more than its fair share of literary and scientific figures. They include Edward Gibbon, John Dryden, Christopher Wren, Robert Hooke, Ben Jonson etc, etc. The first head office of the Fabian Society was also located there.

Thorney, however, is not the only island in the capital – London itself, north of the Thames, is a man-made one, because of the canals running from Limehouse to Brentford which surround it. But it doesn’t have the history of Thorney Island, which gained its name in medieval times because of the brambles growing there.

These were almost certainly hawthorn bushes or trees, and there are a couple of hawthorns today in the Abbey Garden (open to the public for free most weekdays) in the middle of the original island, offering a metaphorical link to a unique piece of history. For more information, visit the website of the Thorney Island Society.