Skip to content
Why did he actually build the thing?
Victor Keegan

Any surprise at stumbling across the remains of this medieval manor house of Edward III, on the Thames Path where Bermondsey meets Rotherhithe and in sight of the Gherkin, is drowned by the immediate thought – what on earth is it doing there at all?

One thing about Edward – the man who plunged Britain into the 100 Years War with France with initial victories at Crécy and Poitiers – is that he was not short of palaces. He spent vast sums on them, mainly financed from the astonishingly large sum of £250,000 he obtained as a ransom for the captured French King John. With this, he turned Windsor Castle, his birthplace, into one of the biggest palaces on earth.

When he was not at Windsor he could be seen at Eltham Palace or at Sheen, which was his favourite and where he died. Oh, and his main gaff was supposed to be at Westminster, which he expanded considerably, including by constructing the Jewel Tower, one of Westminster’s the few remaining mediaeval buildings. 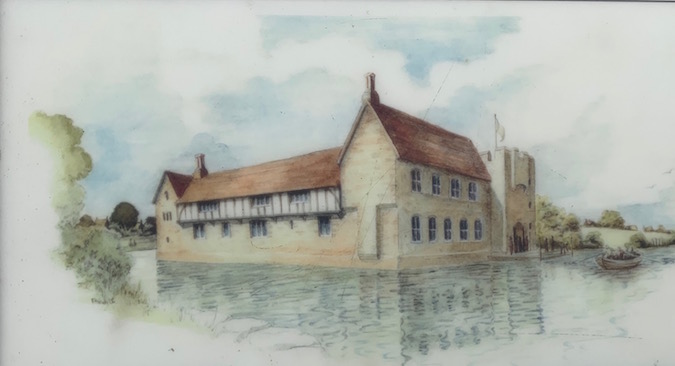 Not content with all these, Edward also built this Thames-side manor house. But why? Some have thought it must have been a hunting lodge, but there is nothing to show that there was ever a park attached where deer could roam. In any case, Edward had already built a number of hunting lodges elsewhere. The most likely theory is that it was built so Edward could indulge another of his favourite hobbies, falconry, for which the marshlands would have been ideal.

It was only in the 1970s and 1980s, when warehouses where demolished on stretch of the river that archaeologists at the Museum of London excavated the remains in order to preserve them and make them available to the public.

The picture above, taken from the information board at the site shows that there was a moat on three sides, with the north side leading out to the Thames and affording a landing spot for Edward after a comparatively short journey from Whitehall. What was going on inside Edward’s head when he decided to build this can only be imagined. Perhaps when you have so many magnificent palaces it is sometimes good to have a bolthole get away from them.