What have Oliver Cromwell, Charles II, Nell Gwyn and Samuel Pepys got in common? Answer: they all banked with a firm called Child & Co, based at the grandly named Number One Fleet Street, adjoining Temple Bar, which straddled the road.

What have Samuel Pepys, Dr Johnson, Jonathan Swift, Alexander Pope, Ben Jonson and a whole crowd of literary giants, maybe even including William Shakespeare, got in common? Answer: they all caroused at the Apollo Club or Devil Tavern at Number Two Fleet Street next door, usually with Jonson presiding.

Oh, to have been a fly on the wall to hear some of the literary – and not so literary – banter that must have taken place. Tradition has it that Gwyn was a great depositor of savings in the bank, while Charles was frequently overdrawn. I wonder if there was any connection…

Later, stuff happened. In 1787, the owner of Number One Fleet Street purchased Number Two in order to expand its banking activities, and the Devil Tavern was closed down. Today, it is reduced to a blue plaque on the wall, while Child and Co is still flourishing there today as a brand of the Royal Bank of Scotland. 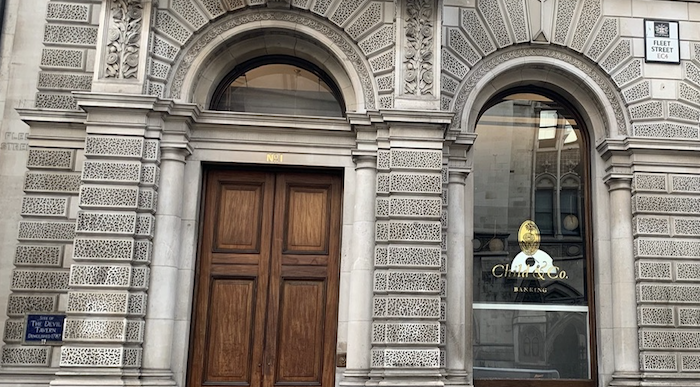 It has a good claim to be Britain’s oldest financial institution, having been trading at the Fleet Street site since 1673 and previously been based in the Strand. It did business under a “Marygold” sign (with its gold centre!). Its current logo, a sun and flower motif adopted in 1988, is based on the original.

The building didn’t completely lose its literary associations when the bank expanded. It re-emerged as the model for Tellson’s Bank in Charles Dickens’ Tale of Two Cities. The author described it as, “an old fashioned, boastful, small, dark and ugly place with musty odour”.

In the novel, it became such a magnet for French bankers visiting London to hear the latest gossip that Tellsons sometimes wrote the latest news and posted it in its window. Maybe this was the true beginning of Fleet Street, albeit in the form of fake news.