Hungerford Bridge, which carries trains across the Thames between Charing Cross and the South Bank, is not the first known by that name at that location. The original Hungerford Bridge was a suspension footbridge, built by Isambard Kingdom Brunel and opened in 1845. It took its name from Hungerford Market, which occupied a site where Charing Cross station now is.

Brunel’s was the first pedestrian bridge to span the Thames. The noted Bradshaw guide book, called it “a marvel of modern mechanical ingenuity” But it wasn’t there for very long. In 1864, it was replaced by the railway bridge designed by Sir John Hackshaw that has been there ever since. The official name of Hackshaw’s bridge, as used by its current owner, Network Rail, is Charing Cross Bridge, though the name of Brunel’s has long adhered to it. And the name isn’t the only part of the original footbridge to stick around.

The two huge, wrought iron chains from which it was suspended were recycled to help create Clifton Suspension Bridge in Bristol, which looks uncannily like Brunel’s footbridge as a whole – that is not surprising, as its engineers built it in tribute to Brunel and based it on his Hungerford Bridge design. And very substantial parts of it are still where they were built. 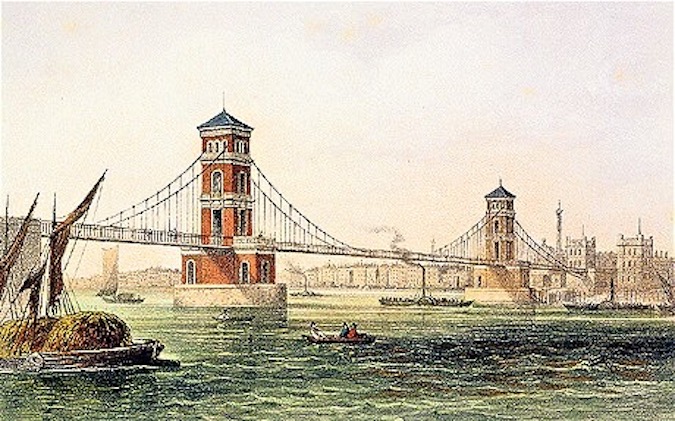 Two large red brick towers helped support Brunel’s bridge, built directly on the river bed without using piles. You can still easily see the remains of these masonry buttresses either side of the Thames. On the South Bank side, the original pier with a door to stairs which led down to a docking place for steamboats survives. The one on the north side is now closer to the river bank than when it was built due to construction of the Victoria Embankment in 1870.

Today, most Londoners are familiar with the Golden Jubilee Bridges, the pair of modern footbridges, designed by Lifschutz Davidson Sandilands, which have flanked the Hungerford (or Charing Cross) Bridge since 2002. These are successors to various walkways that were appended to the rail bridge to make up for the loss of Brunel’s, and they too unofficially bear the name of their lost forerunner, being often referred to as one or other “Hungerford footbridge”.

The original suspension footbridge was not Brunel’s only contribution to the history of the Thames. He helped his father, Marc, build the world’s first underwater tunnel at Rotherhithe a few miles downstream, which is still used as part of the underground system. A little further east he built the Great Eastern steamship in 1858, which was by far the biggest ship in the world at the time and continued to be so for over 40 years. London owes him a big debt.

All previous instalments of Vic Keegan’s Lost London can be found here.
OnLondon.co.uk is committed to providing the best possible coverage of London’s politics, development, social issues and culture. It depends on donations from readers. Individual sums or regular monthly contributions are very welcome indeed. Click here to donate via Donorbox or contact davehillonlondon@gmail.com. Thank you.