There are so many pictures in the gallery, many of them masterpieces, they have to be tiered along the walls. The collection includes 22 Canalettos and French 18th century classics, plus works by Titian, Velasquez, Rubens, Gainsborough, Reynolds and some amazing Rembrandts. It feels as if a multibillionaire – a rare one with good taste – has run amok with his chequebook. I like it a bit more every time I visit, not least for its intimacy. It doesn’t even have lines forbidding you to go near the exhibits.

And that’s only the paintings. There is also a very large collection of furniture, including more Marie Antoinette treasures then Versailles, numerous miniatures and the biggest collection of armour in the land etc etc. A unique factor is that in order to see the Wallace’s treasures you have to go to the gallery itself, there as it is a condition of their bequest to the nation by the widow of Sir Richard Wallace (illegitimate son of the fourth Marquess) that nothing is ever loaned out or, perish the thought, sold. 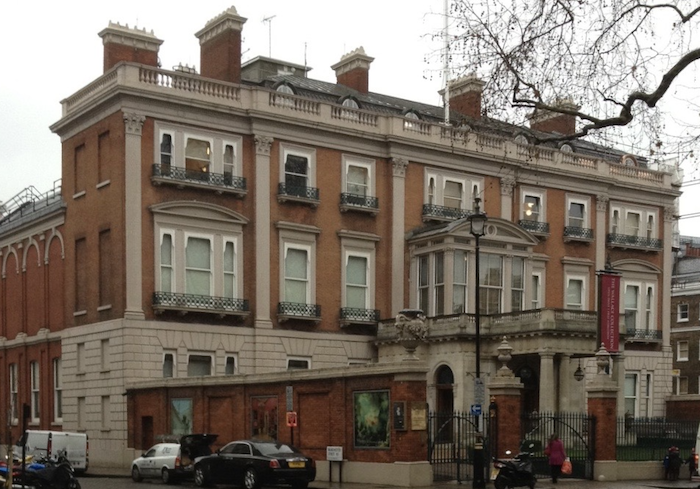 One of my favourite paintings is Frans Hal’s The Laughing Cavalier (even though its subject is neither laughing nor a Cavalier). It was acquired at an auction in Paris in 1865, when it was called Portrait of a Man. Two of the richest people in the world, James de Rothschild and the fourth Marquis of Hertford, engaged in a fierce battle to buy it, which was won by the latter for a price six times the painting’s pre-sale estimate.

The Wallace Collection is at Hertford House, Manchester Square, London W1U 3BN. Sadly, it is now temporarily closed due to the coronavirus outbreak. In normal times, entrance to the gallery is free and you can salve your conscience by making a contribution or having a glass of wine and a snack in the glorious Norman Foster-designed atrium restaurant (see top photo).

To end, a little known fact: Sir Richard, who was a francophile, built 50 drinking fountains scattered around Paris, which to this day are known as “Wallaces”.

OnLondon.co.uk is committed to providing the best possible coverage of London’s politics, development, social issues and culture. It depends on donations from readers. Individual sums or regular monthly contributions are very welcome indeed. Click here to donate via Donorbox or contact davehillonlondon@gmail.com. Thank you.