Skip to content
It was almost as successful as its more famous predecessor, but suffered from the start from a bad press
Victor Keegan

Everyone knows that the Great Exhibition of 1851 in Hyde Park, held in the Crystal Palace, was an outstanding, and hugely profitable, international success. But hardly anyone has heard about its successor, the International Exhibition held eleven years later in 1862 in Cromwell Road, where the Natural History Museum and the Science Museum now stand.

It was much bigger than the 1851 version, stretching an astonishing 384 yards along Cromwell Road, and sporting two domes, each 87 yards high, claimed to be the biggest in the world. It attracted 29,000 exhibitors from 37 countries and more visitors (marginally) than its illustrious predecessor. It achieved all this despite low participation from America because of the civil war going on there at the time.

So why has it sunk into oblivion? It is partly because the building itself looked, well, glum compared with the innovative glass cathedral designed by Sir Joseph Paxton for the 1851 extravaganza. It was partly because the entrepreneurial dynamism of Prince Albert, who died in 1861 before it was completed, was missing. His death plunged the country and the Queen, who did not attend the opening, into a state of mourning.

But there was a deeper reason too. In retrospect, it is clear that 1851 marked the high tide of Britain’s industrial might and self-confidence. We had dared to create a huge exhibition space, not just for British products but for anyone in the world to come and dare to compete. It was the apex of the movement for “free trade” before government regulation stepped in.

Some critics said there was a democratic deficit compared with 1851 because of the lack of direct public engagement. In the run-up to 1851, hundreds of local committees had been formed, partly to raise money but also to give people the chance to choose what products they would like to see.

There was also a really stupid mistake, which was repeated later with the Millennium Dome in 2000. The organisers predicted the 2000 Dome would attract 12 million customers, and when it only achieved half that rate (not bad in itself) it was deemed a failure. Exactly the same happened in 1862. The organisers predicted 11 million and when the figure turned out only to be 6.1 million. This gave the impression of failure, even though six million in those days when the national population was, at 29 million, less than half of what it is now, was no mean achievement. Some visitors to the exhibition complained it was too big, while some exhibitors claimed it was too small. It couldn’t win. 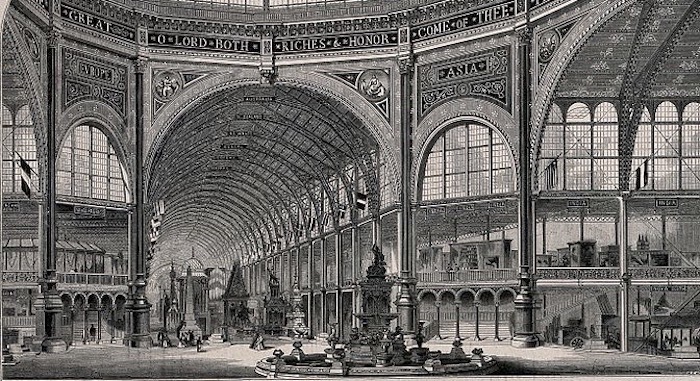 To add insult to injury, Parliament vetoed the government’s plan to purchase the building as a permanent venue. Instead it was pulled down and the materials sold for the construction of Alexandra Palace. Part of the glumness of the building was because it was intended to be permanent and was constructed in a deliberately plain style so it could be added to later when more money became available. It was constructed fairly simply of cast iron frames with brick facades.

Yet the exhibition was not without its attractions. In spite of its external plainness, it could be very ornate within. Picture galleries occupied a large part of the south side of the site – a reminder what sponsored was provided by The Royal Society of, Arts, Manufactures and Trade.

Among the exhibits were Charles Babbage’s Analytical Engine, arguably the world’s first computer; demonstrations of the electric telegraph, submarine cables, cotton mills, maritime engines and an early refrigerator (which apparently caused a sensation); and work by William Morris’s decorative arts firm. Some 350 stereo views of the exhibition were made for the London Stereoscopic Company, providing a three-dimensional record of the exhibition. There was plenty of classical music, including work by Verdi and even an international chess tournament.

In retrospect the exhibition did not deserve some of the reactions it got at the time. Its fault was that couldn’t live up to the surprise and charisma of its 1851 parent. On its own terms it was a remarkable success.