In 1918, number 13 Hercules Buildings in Lambeth was demolished. This was the house in which William Blake lived with his wife during what is regarded as his most productive period in the 1790s. It was here that he wrote works such as Visions of the Daughters of Albion, Songs of Innocence and of Experience and poems like The Tyger, and produced his famous prints, including of Isaac Newton and Nebuchadnezzar.

It appears he had his vision of the measuring compass – now memorialised in Eduardo Paolozzi’s giant statue outside the British Library – on the stairs of his home. And it was here where, in his words, “We builded Jerusalem as a City & a Temple; from Lambeth We began our Foundations; lovely Lambeth!”

It was a clean house with about nine rooms, which housed Blake’s printing press and working areas. People visiting in later years found the front door of the house nailed up and, after achieving entrance to its garden through the next door neighbour’s passage, found it was overgrown with the vine and fig tree Blake often wrote about.

In those days, stepping out of the front door would have presented a semi-rural outlook. Today, there are dark railway arches resurrected with lovely mosaics of Blake’s works. (see one superimposed on the old photo of the house below). Together, they create the sort of derelict atmosphere that Blake, a compulsive night walker, wrote about in one of his most famous poems:

I wander thro’ each charter’d street,

Near where the charter’d Thames does flow.

And mark in every face I meet

Marks of weakness marks of woe.

It was at about the same time as Blake was in Lambeth that another poet called William – William Wordsworth – was rhapsodising about the view from Westminster Bridge. If he had turned the other way to face Lambeth Bridge the view would not have been so romantic. But then, unlike Blake, Wordsworth was not a Londoner. 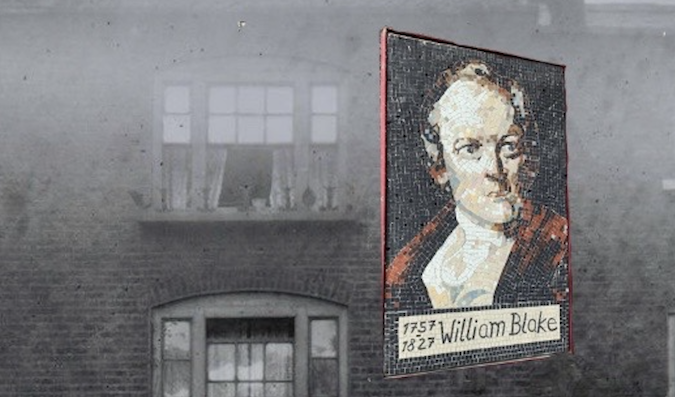 Near Blake’s house was a small road leading to the home of Philip Astley who ran a famous circus – claimed to be the world’s first modern circus – on the southern side of Westminster Bridge. Apparently, Hercules Road was named after one of its long-lasting performers.

Also not far away, at the southern end of Blackfriars Bridge, was Albion Mills, built by the great engineer Matthew Bolton between 1783 and 1786 and powered by steam engines which physician Erasmus Darwin called “the most powerful machines in the world”. Albion Mills was almost certainly the inspiration for Blake’s “dark satanic mills”. The mills caught fire in 1791, a spectacle that Blake would almost certainly have seen.

It is tragic that Blake’s house was demolished at a time when conservation was not in vogue. But Blake himself would have been pleased that his poems – through the mosaics – still haunt the place that inspired them.

OnLondon.co.uk exists to provide fair and thorough coverage of the UK’s capital city. It depends greatly on donations from readers. Give £5 a month or £50 a year and you will receive the On London Extra Thursday email, which rounds up London news, views and information from a wide range of sources. Click here to donate via Donorbox or contact davehillonlondon@gmail.com. Thanks.