Skip to content
There's barely a sign of it now, but in its day it vied with the Globe for global fame
Victor Keegan

The Anchor brewery started life immediately next door to the Globe Theatre on Bankside in 1616 when Shakespeare was still alive. It went on to expand globally and become, by 1809, the biggest brewery in the world.

It is an amazing coincidence that neighbours on this once very insalubrious London road should become global icons for such contrasting activities. Shakespeare is still a worldwide success story while the brewery – all nine acres of it – has disappeared from sight. But it was not always so. After 1833, when the brewery was re-built following a fire, it became an international tourist venue, attracting celebrity visitors such as Napoleon, Bismarck and the Italian revolutionary Garibaldi during his triumphal visit to London, during which he attracted huge crowds wherever he went. Dr Johnson too had a close association with the brewery, even having his own room there for a while.

It is unlikely Shakespeare ever visited it, but it is bound up with his memory to this day. In 1834, nearly two centuries after the Globe was pulled down, the Anchor’s owners constructed Anchor Terrace on part of the Globe site in Southwark Bridge Road, with houses to accommodate its senior executives. 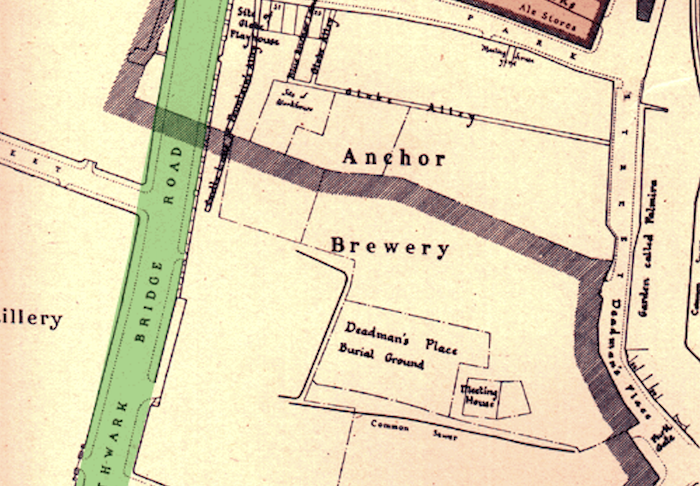 This was long before it was realised that some of the Globe’s foundations were still there. The entire terrace is now Grade II listed, so there is not much that can be done about further excavations. But some of the rather sparse foundations of the Globe can still be seen below Anchor Terrace in Park Street. This is beside the river, a couple of roads from that highly successful recreation of the Globe, known as Shakespeare’s Globe

There is another slightly odd connection between the Anchor and Shakespeare. The brewery was originally built by James Monger in Dead Man’s Place on a site leased to him by Sir John Bodley, whose son Sir Thomas Bodley founded the revered Bodleian Library in Oxford and, famously, would not accept plays by the likes of Shakespeare as he believed it would be a scandal to the library if such “riff raff” were allowed in.

The brewery’s expansion continued when purchased by David Barclay (of the Barclay Quaker banking family) who brought in his nephew Robert Barclay from America who, in the 1780s, teamed up with a senior employee, John Perkins, under the trading name Barclay Perkins. By 1809 they were producing a world-leading 260,000 barrels a year. In 1955, Barclay Perkins merged with a rival London brewer, Courage. Brewing continued there until the early 1970s. The buildings were demolished in 1981.

All that remains of the brewery now is a small plaque, but the memory is kept alive by the nearby Anchor Tavern, which dates back to the early 1770s.