Hatchards in Piccadilly is the oldest bookshop in the UK and one of the oldest in the world. It was founded in 1797 by John Hatchard, a former pupil of the local Greycoat Hospital school, which was founded even earlier in 1698 and is still going strong today as an academy.

Hatchards is situated immediately next door to another British institution founded in Piccadilly, 90 years earlier: Fortnum and Mason, grocer to royalty. The two have stuck together ever since Hatchards appeared, even though both are now subsidiaries of bigger companies (Hatchards is owned by Waterstones and Fortnums by the Garfield Weston Foundation). They even have adjacent shops at St Pancras International station. It seems to be a symbiotic relationship.

And there’s a further long-running strand to the Hatchards story. If you look above its Piccadilly shop front, you will see a faded plaque (pictured below) which is almost impossible to read yet points to another flourishing British institution with its roots on this very spot. 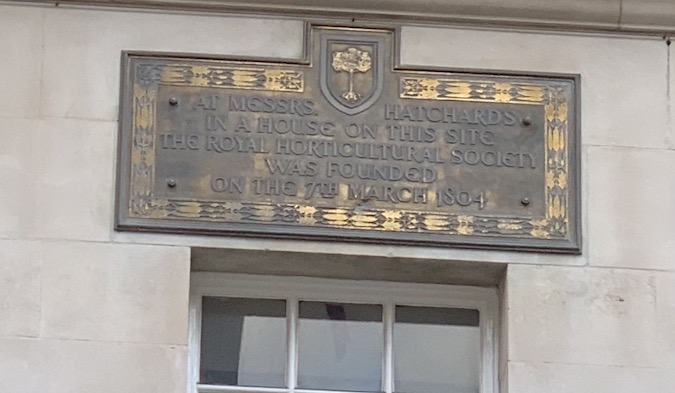 On 7 March 1804, seven men met at Hatchard’s bookshop to discuss the possibility of establishing a horticultural society in the UK. They included John Wedgwood, (son of Josiah), Sir Joseph Banks, President of the Royal Society, and William Forsyth, after whom the shrub forsythia is named. He was head gardener at the Chelsea Physic Garden and also a royal gardener.

From this curious beginning the amazingly successful Royal Horticultural Society was born. It now has well over 500,000 paying members and runs the world famous Chelsea Flower Show as well as a string of other garden showpieces around the country.

It is remarkable that these three institutions spawned within a few yards of each other still exist and are doing much the same things as when they began. Most of the companies that were operating at about that time have disappeared without trace. Maybe it is time for a reunion – in Hatchards, of course, with hampers supplied from next door and flowers by you-know-who.

Many of Vic Keegan’s Lost London columns have now been compiled into a handsome self-published book. Buy a copy HERE.