This is the nearest you will ever get to a Paradise garden – well, at least in your lifetime. It is as if Noah had called in his favourite plants and trees from around the world and hidden them in a secluded few acres in Chelsea. The Chelsea Physic Garden is not exactly lost, but it is assuredly hidden and still unknown to millions of Londoners.

The garden’s high, prison-like walls help to create a genuine microclimate, which seduces you as soon as you walk through a tiny entrance in Swan Walk among dangling pomegranates. Turn right and you will pass a banana tree and an olive tree (the oldest flowering one, it is claimed), the most northerly grapefruit tree and even – strictly come legal – proud looking cannabis plants. From there you are on your own to stumble across the secrets of this intoxicating place, including a Grade II listed rockery, complete with clamshells from Captain Cook’s Endeavour and Icelandic larva brought to the Garden in 1772 by the great plant adventurer Sir Joseph Banks (pictured in his rockery below). 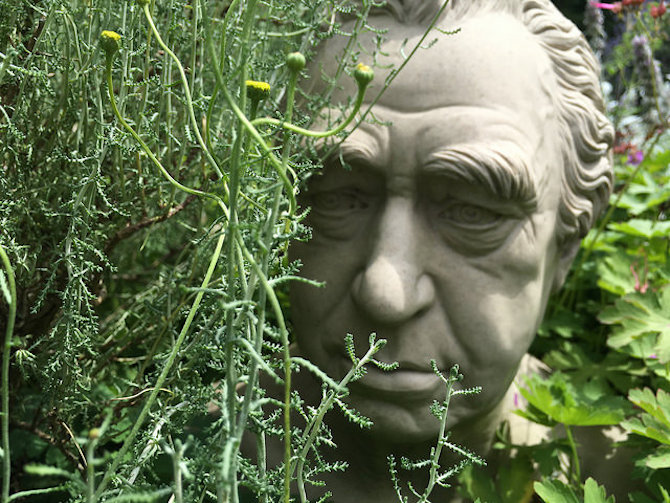 In its day its day the Garden was the central seed market for the British Empire. For instance, in 1733 it sent a packet of long strand cotton seeds to the new colony of Georgia, the first to be grown in America. By the Garden’s account, this small packet, “Became the parent of the subsequent great American cotton crops; a mainstay of the economy ever since”. Cotton was also, as the Garden freely admits, intimately linked to the slave trade, with all that that entails.

These are but some of the plants and trees ranging from mulberries to ginkgos and even a row of manicured grape vines that assault the eye as you wander around – and all of them serve a purpose, whether medicinal, environmental, historic or economic.

The Garden owes its existence to the philanthropy of Sir Hans Sloane – he of Sloane Square – who bequeathed it in perpetuity for a peppercorn rent of £5 a year on condition it was maintained as a physic garden. He also bequeathed artefacts which helped to found the British Museum. They don’t make philanthropists like that any more.

But, sadly, as with so many philanthropists, there is also a side story here as Sir Hans was well aware of the slave trade from his visits to the West Indies. In 1695, in London, Sloane married Elizabeth Rose, widow of Dr Fulke Rose, a leading slave owner and became a beneficiary of her 33 per cent share of the profits from her husband’s estates.

On the brighter side there is a fine café at the Garden, serving snacks and very good lunches with tables spilling onto the lawns in summertime. It is difficult to think of a nicer place in London to have lunch and a glass of wine on a sunny day.

All previous instalments of Vic Keegan’s Lost London series can be found here.