In 1989, archaeologists digging next to Cannon Street station by the passage of the River Walbrook found the remains of a building nearly 60 feet long. It turned out to be the Guildhall of the Merchants of Cologne and dated back to 1175. Known as the Steelyard (seen above on Wenceslaus Hollar’s largely correct map as “the Stiliard”), it later became the enclosed London centre of a German-dominated international trading block known as the Hanseatic League. Yes, it was Germany-on-Thames.

The building was occupied by young, upwardly mobile German merchants who stayed for a few years in what have been described as near monastic conditions – sometimes honoured in the breach – before going home to resume their careers. They ate in hall together and were discouraged from marrying or even being out late.

The Hanseatic League was lauded as a free trade area by those who were a part of it, but as a monopoly by those outside. It occasionally descended into warfare across Europe as Hanseatic cities supported each other against intruders. At its peak of power, the League could count on the support of nearly 200 towns across northern Europe.

As early as 1157, Henry II (1133 -1189) granted traders exemption from all tolls in London and some taxes, allowing them to trade at fairs throughout the land. If all this sounds a bit like the free ports the government is planning for the UK, one can only say “watch this space”.

By 1475, the site had been purchased by the Hanseatic League itself, and its descendants retained ownership of the Steelyard long after the League itself had disbanded. The remnants were not finally sold off until 1852, when the station was built by the South Eastern Railway company. Some of the remains of the trading house found in 1989 may still be buried underneath. It appears that the Steelyard had several rows of warehouses, with chambers above and vaults and cellars below. 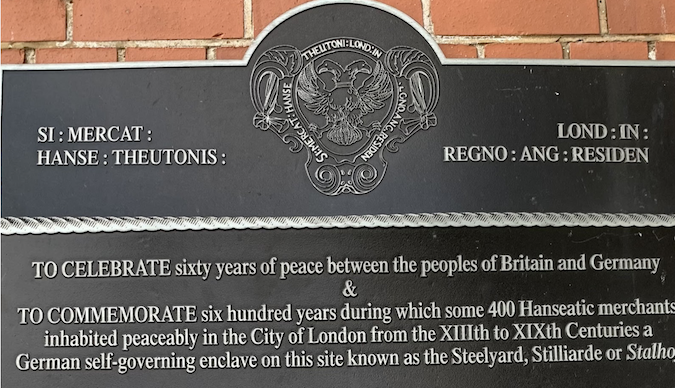 Nothing of the trading post remains above ground but there are still plenty of memorials, such as: Hanseatic Walk behind the station on the Thames Walk; Steelyard Passage, which runs under it (and is as near as you will get to the original site); the Pelt Trader pub (recalling trade in skins) under a railway arch; and a plaque celebrating “600 years during which time some 400 Hanseatic merchants inhabited peacefully in the City of London”.

Dowgate Hill, which runs into Cousin Lane to the west of the station, has had the same name since the early days, while the former Church Lane on the east side has become All Hallows Lane, a reference to the church the leaguers attended

It is still debatable why the League’s London base came to be known as the Steelyard. The most likely explanation is the metal seals that were used to certify the origin of different cloths brought here for export.

While London was never officially one of the Hanseatic cities, it was nevertheless a major trading post intimately linked to them. According to Jens Tholstrup, an economist, the League probably had a 15% market share of English imports and exports. Not bad for a small Thames-side enclave.

And don’t write the League off yet. In 2006, King’s Lynn (one of the original English Leaguers) became the first English member of a new Hanseatic League formed in Zwolle in the Netherlands in 1980. It was joined by Hull in 2012 and Boston in 2016. It remains to be seen what becomes of that initiative in these straitened times.