The location of the “pretty garden house” where John Milton lived when he wrote much of Paradise Lost has more than enough in its past to make psychogeographers quake.

Themes of truth and liberty run indelibly through the history and inhabitants of Petty France, or York Street as it was renamed for a time. Milton moved there in 1651. Judging by old maps, his house would have been where the engraving of it is superimposed on the photo above.

Today, Sir Basil Spence‘s brutalist office building stands on the site. Completed in 1976, it is currently the home of the Ministry of Justice. Justice is a subject which, along with censorship, Milton spent a long time worrying about. Today, he would have been even more worried. Consider his most famous assertion:

“Though all winds of doctrine were let loose to play upon the earth, so truth be in the field, we do injuriously by licensing and prohibiting to misdoubt her strength.”

It is often quoted as a precursor to the 1st Amendment of the US Constitution, but has been tested almost to destruction in Trump’s America and to actual destruction in China and Russia.

Justice also took a hit in the form of the building which previously stood on this spot. In 1877, a dodgy City banker erected Queen Anne’s Mansions to a then unprecedented 12 storeys, more than twice as high as the law allowed, without obtaining planning permission. He got away with it. 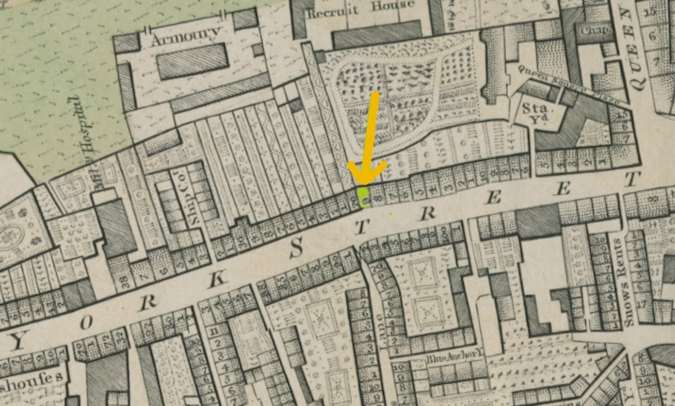 This would have offended the principles of a subsequent owner of Milton’s house, Jeremy Bentham, whose guiding principle – the greatest happiness of the greatest number – was in direct opposition to the ethos of Queen Anne’s Mansions. Bentham erected a small plaque with the words “Sacred to Milton” at the top of what was at that time 19 York Street. You might be able to see it in the engraving if your eyesight or magnifying glass are good enough.

Bentham’s utilitarianism was later attacked by John Stuart Mill, who believe it or not, was another resident of 19 York Street. So too was his father James Mill, a student and collaborator of Bentham. The younger Mill thought Bentham “to have done and to be doing very serious evil”, not least for failing to see conscience as a driving force.

The same house was later occupied by the great essayist William Hazlitt, another great proponent of liberty and the rights of man, though this didn’t always extend to the rights of his dinner guests. On one occasion Hazlitt turned up very late to a christening party at number 19 for his own son. His guests were appalled by the food – almost uneatable stodgy potatoes followed by overcooked beef. Sometimes, the greatest happiness of the greatest number took a holiday at this house. It was demolished in 1873.

PS: The location of Milton’s house as stated here is nearly 100 yards from a plaque honouring Bentham in Queen Anne’s Gate. Little known fact: Milton was no “mean performer on the organ”.