Skip to content
It was one of six architectural railway glories, of which only fragments remain
Victor Keegan

It is not a palazzo in Venice. It is not an English country mansion gone walkabout. It is Highbury and Islington station. Not today’s version but the former one from 1872, an era when stations were designed to be admired and not just passed through.

Its spectacular Gothic revival style – with Venetian touches – was described by the Illustrated London News as being “of a distinctive design not repeated elsewhere on the railways in England”.

What a contrast with today’s banal (though happily pedestrianised) station frontage, though there is a link with the past. The tall column of brickwork – to which the arrow is pointing in the photograph below – is part of the original building. 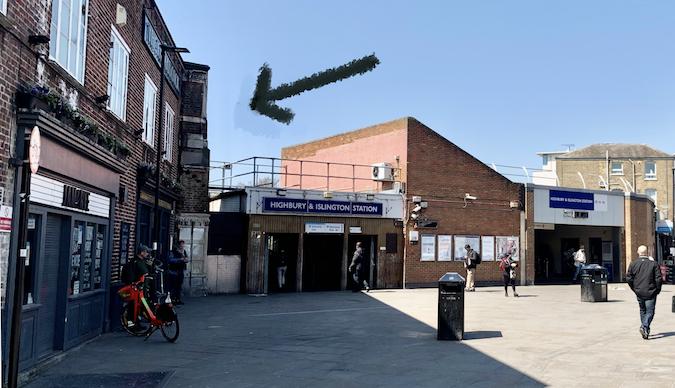 The old station’s architect was 29-year-old Edwin Henry Horne from Regent’s Park, whose drawings for the station were exhibited in the Royal Academy Summer Exhibition of 1873 (see top image). On the left of the building is the Cock Tavern, which dates back to 1780 and is still there, a mecca for Arsenal fans. In the centre was the actual station, with its vast booking emporium and billiards hall with a row of shops to the right.

John Betjeman, the patron saint of Victoriana and saviour of St Pancras, loved these stations and was angry at the way British Rail was stripping the North London Line of its glorious architectural heritage – but to no avail. Later on, in 2015, a petition to Parliament calling for the reconstruction of the facade of the original 1872 station, which had suffered severe damage from bombs during the Second World War, failed to get enough votes to proceed. It attracted only 157 signatures.

It was one of six stations Horne was commissioned to build by the imaginative North London Railway Company to replace and enhance six earlier wooden ones at Bow, Barnsbury, Canonbury, Camden Town, Highbury and Hackney. In 1870, The Engineer journal said of the one at Bow (which had a 1,000 seater concert hall on top): “The building, is, in our opinion, as good an example of what a railway station should be as any we have ever seen”.

Almost all of those stations have disappeared, apart from a renamed Camden Road and Hackney Central, which has been turned into a music venue next to the new station.

It was not only the buildings that disappeared. So did the architect. There is no record of Horne between 1880, when he was living in Old Broad Street, and 1891 when he re-appeared in lodgings in Dover using a number of different names. Whatever happened to him during those lost years is a mystery yet to be solved. It could have involved a lot of interesting buildings that were never built.