The Great Eastern steamship, built by the amazing Isambard Kingdom Brunel, was one of the wonders of its age. Constructed on the banks of the Thames at Millwall in 1858 to carry 4,000 passengers non stop to Australia, it was, at 692 feet, the longest ship the world had ever seen and remained so for over 40 years until the RMS Oceanic pipped it in 1899. It was also the first ship to be built almost completely of wrought iron and had three different modes of propulsion – propellers, sails and paddle wheels – to ensure she kept moving.

Although the ship was scrapped in 1890, the remains of the slipway on which it was launched can still be seen at low tide in Millwall, a shortish walk from Island Gardens DLR station. I took this photo of it at low tide, though the water was higher than expected because of rain, so only part of it was showing. 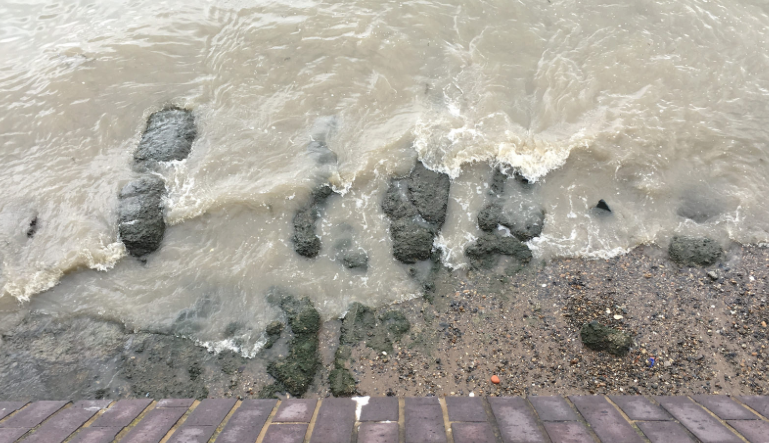 It almost boggles belief that Brunel built this monster on the banks of the Thames and had to launch it sideways from its moorings because there was not enough space on the river to do it in the conventional manner. Small wonder it took multiple efforts over several months to finally get it into the water.

The Great Eastern – the third of the large ships designed by Brunel – had a chequered career. While it was being built, Brunel’s budget was cut from £500,000 to £250,000, entailing many economies including abandonment of plans to build a new dock. Bad luck followed it when it entered service, ranging from the bankruptcies of the various companies that owned it to boiler explosions and hitting an uncharted rock while negotiating entrance to New York harbour.

After being sold at auction, she found a new life laying transatlantic cables from Europe to America. In 1887 the ship was sold again and went to Liverpool where she was broken up. A sad end to a massive pioneering project by one of the greatest engineers Britain has produced (though he was the son of a Norman immigrant and did much of his schooling in France). The Great Eastern’s worst mistake was to have been born decades ahead of its time.