King Edward I, also known as Longshanks, is mainly known today for two things, one romantic, the other utterly discreditable. The romantic bit was authorising the construction of 12 large, ornate crosses between 1291 and 1294, marking the nightly stopping points on the journey of the body of his beloved wife Eleanor of Castile on its journey from Lincoln, where she died, to Westminster Abbey in London. The last of these was erected at the London village of Charing in the middle of today’s Trafalgar Square. Yes, Edward was the man responsible for putting the “cross” in Charing Cross.

If you look at an old map of London there is generally a small drawing showing its location in what was then the Royal Mews, where the equestrian statue of Charles I now stands. Made of marble, it was the most lavish of all his crosses – a work of love, but also a public demonstration of his kingship paid for directly or indirectly by the people.

It lasted for over 300 years before being destroyed in 1647 by Cromwell’s cronies during the Civil War and becoming for a short while a fishmonger’s stall. When the restoration saw Charles II become king in 1660, the site of the cross was utilised in a gruesome way when eight of the regicides who had killed Charles’s father were executed there. A Victorian replica of Eleanor’s Cross can be seen today in the forecourt of the nearby Charing Cross Hotel, which gives a good impression of the original’s size and grandeur (see photo).

In 1675, an equestrian statue of Charles I, which had been made in 1633 and then hidden after Cromwell had ordered its destruction, re-emerged and was reinstalled on the site of Eleanor’s Cross looking down Whitehall at the Banqueting House where he was beheaded. History has a strange way of taking revenge. 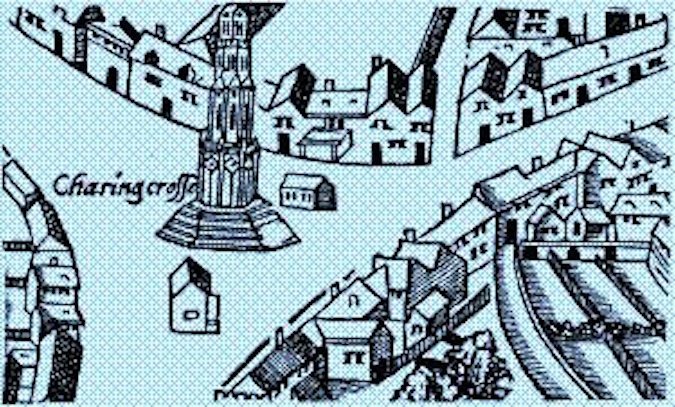 But what of the other side of Edward I, the one that is remembered with revulsion? In 1290, the same year that he mourned Eleanor’s death, he authorised the expulsion of the Jewish population from England. The country’s main influx of Jews had come with William the Conqueror in 1066 and their ability to lend money at a time when lending for profit was strictly forbidden by the church played a leading role in the financing of economic growth. But it also generated hostility. Jews were directly answerable to the king and did not enjoy any of the privileges of Magna Carta.

The expulsion order for the Jews lasted for over 350 years until it was rescinded in 1656 by none other than Cromwell. The few square yards that were home to Eleanor’s Cross and then Charles I on horseback have seen more history than most other places of similar size.