“The war is over and we have won,” said Nigel Farage from Parliament Square in the final seconds before 11.00 pm and the United Kingdom formally left the European Union. He spoke to one of the larger gatherings mustered by Leave forces in the capital, where political parties led by Farage have never made much impact and which is seen by many as a city colonised by people and values they dislike. Farage himself once described his unease at being on a train heading for Kent from Charing Cross and hearing nobody speak English till he was beyond Hither Green. His speech brimmed with talk of liberation and was delivered a few yards from Ivor Robert-Jones’s statue of Winston Churchill.

“This is the greatest moment in the history of our great nation,” he declared, and described a Britain about to become “democratic, independent, self-governing and, I hope, proud. Free from the constraints of the European Union, we will once again be able to find our place in the world”. We would be able to “re-engage with the Commonwealth, with America, with our friends all over the world. It will be a global Britain.”

For several hours Brexiters had been converging on the spot, with their Union flags and hats and Brexit Day badges. Many of the voices were of the old London kind that has spread down the Estuary, returning now to celebrate and crow, though a party of three that boarded an Underground train at Waterloo had accents from the North of England. One was a  woman in a motorised wheelchair, her vehicle festooned in red, white and blue tinsel. “Look at that athlete!” enthused one of her male companions fondly, as she bumped aboard the carriage. “Go on, girl!” said a fellow Leaver, posing for photos outside the branch of Greggs at the next stop, Westminster, as she trundled towards the lift that would bear her up to street level. 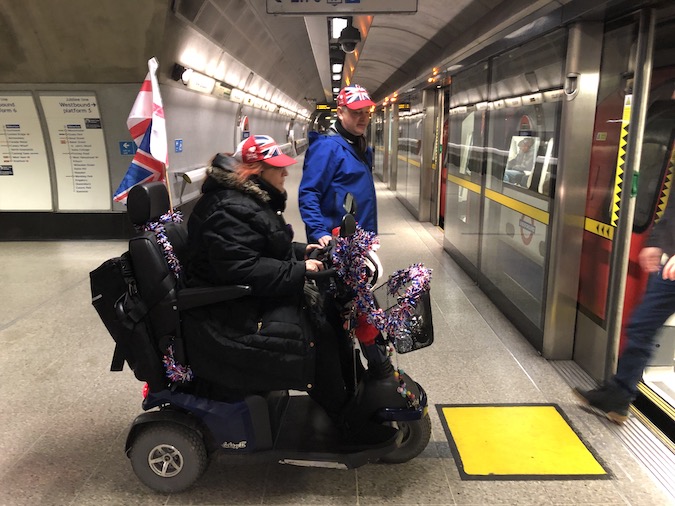 Also at Westminster Tube, Jennifer from Brighton, sitting with her son and a beautiful black labrador, said she was there “to spy and infiltrate”. She laments Brexit, “but I hate my smug middle-class friends who think it’s just racists and xenophobes who voted for it”. She’d told her son he was there to witness a moment in history, but says his father, who is German, would be “very upset if he knew I was taking him”.

With two hours to go, there had been a seething, millenarian atmosphere in the square, with Brexit enthusiasts of every kind. Some seemed to have stepped out of 1970s newsreel footage. A cardboard model Big Ben dinged infernally. There were Brexit platitudes and unexpected personal takes. IT consultant Anthony Clarke from Esher, in a fine Union flag waistcoat, used to work for the European Commission. He said he was shocked by the corruption he encountered when he brought up accounting irregularities. He hopes the future for Britain is joining an alliance of independently trading nations, which he envisages might use a digital currency, a modern equivalent of the Ecu, just for trade. 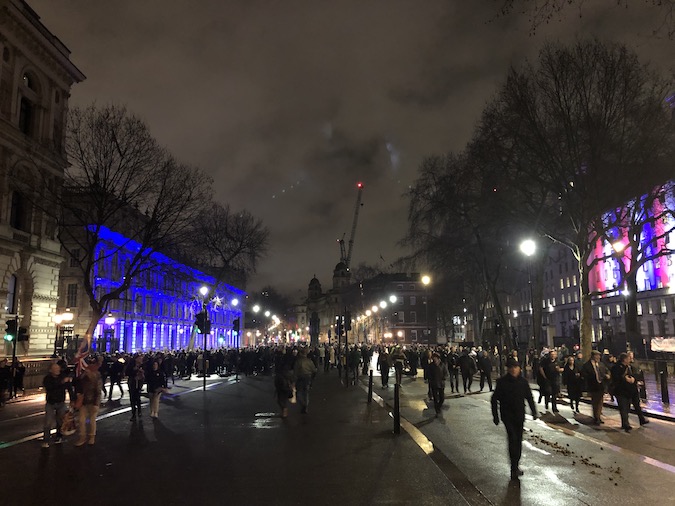 Harry Todd (pictured below) had been a national campaign organiser for Leave Means Leave and organised the March to Leave from Sunderland to London. “It was beautiful”, he says, adding that mocking media coverage of the tiny number of marchers wasn’t unfair per se, it just hadn’t accounted for the fact that they would be walking along A-Roads. Todd, a lifelong Conservative, campaigned for Remain in the 2016 referendum, but changed sides because he was infuriated by some Remainers’ lack of respect for democracy. He’s optimistic that there won’t be further rifts between the capital and the rest of the country, because “the silent majority in London understands it was a collective vote as a nation”. 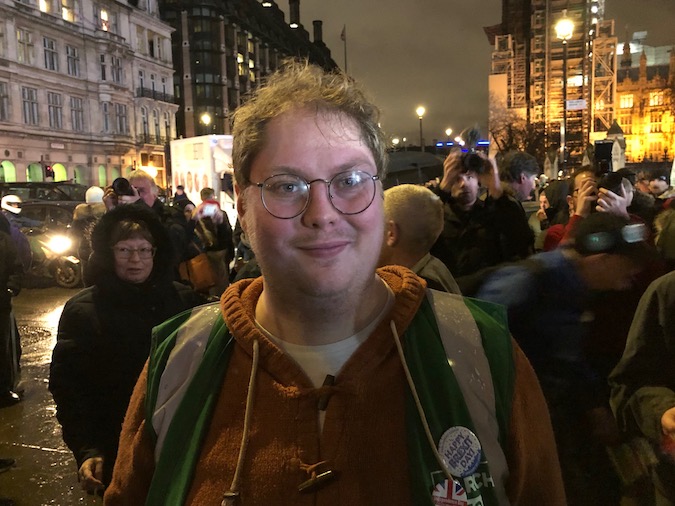 As the leaving hour neared, there were occasional beery outbreaks of God Save The Queen from little groups of men (literally) wrapped in Union flags making their way down Whitehall from Trafalgar Square. The odd bellow of “Boris!” went up as they passed Downing Street, where a countdown clock was projected on to the front of Number 10. Outside the gates, two defiant Remainers displayed EU favours. A light show played across the front of adjoining Whitehall buildings, switching from red to white to blue.

Paul, a French property manager working in London sees leaving as “culturally ridiculous” when the majority of those working in sectors like hospitality are European. Britain’s relationship with Europe is “a problem of acceptance”, and Brexit is, in part, due to “xenophobia” he thinks. “But you’re also chauvinistic and patriotic”. His companion Selma, French and of mixed heritage, “understands the need to recover identity”, but thinks the economic damage is heinous. “France is similar, but we are so invested in Europe” she says. 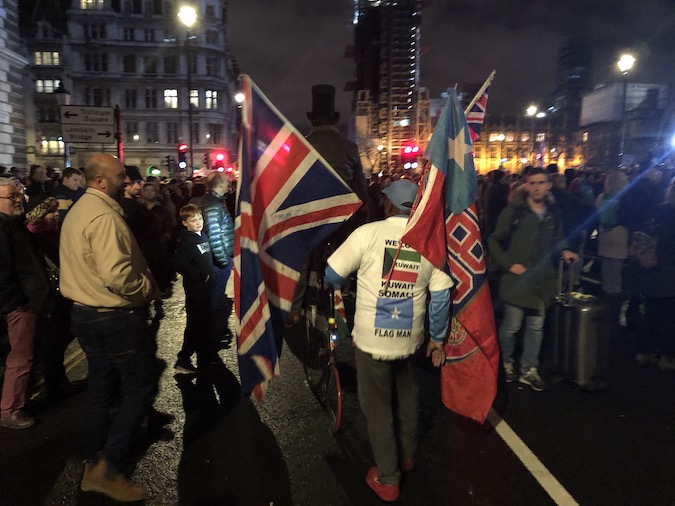 A group outside St Stephen’s Tavern on Bridge Street were none too keen to talk. “Of course I’m a Londoner, where are you from?” said a thin man in glasses and a cap. “You sound like a cunt”. The protest chant of “Whose streets? Our streets!” briefly went up. Yet Frances Kelly from Cranham (below), standing with her husband opposite Downing Street, couldn’t have been a more agreeable poster girl for Brexit. Globalist Leavers tend to be thought of as a turbo-capitalist fringe, but Kelly seems to personify their outlook in daily life, suggesting that the main advantage of Brexit is bringing Britain closer to the rest of the world. “I think we [as a country] care”, she says. “I sometimes think my foreign friends are the best friends I’ve got.” She’d just had dinner at the Lahore curry house with people of all nationalities. She used to live in Barking and goes back there every week because she likes the diversity. 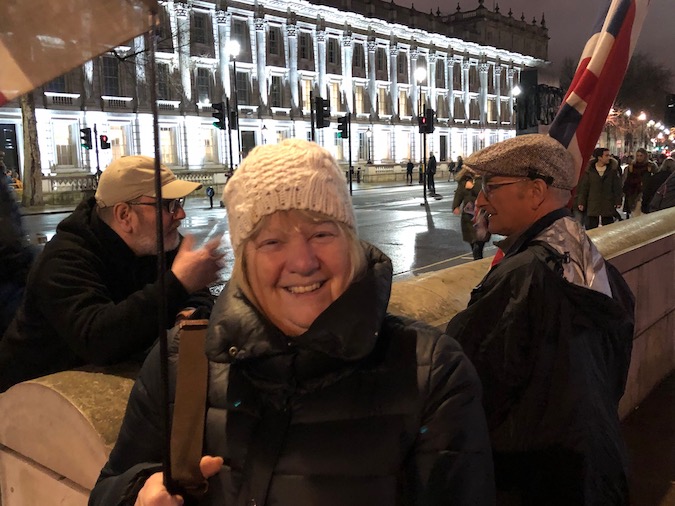 Back in Parliament Square, the perturbing Neil Horan was predictably on hand, his hand-written placard proclaiming that “Boris Johnson is sent by Christ to get Britain out of the European Union and fulfill (sic) Bible prophecy”. One man, trying to locate a friend, barked into his phone, “You’re by the statue of the terrorist? Nelson Mandela? Fucking terrorist?” But they were the extremes. Paul from Lambeth watched Farage’s arriving car work its way through a mob of supporters. He’s a long-time Labour supporter who defected to the Brexit Party. He despairs of how “Labour has betrayed the working class over the last 20 years” and believes it will be another 20 before they are in power again. Keir Starmer is the only leadership candidate he thinks could stop the rot.

There was compering by radio presenter Julia Hartley-Brewer, an eclectic selection of songs – It’s Not Unusual, Re-Light My Fire, We Are The Champions –  speeches by the Brexit Party’s Richard Tice – longlisted to be the Conservative London Mayor candidates less than two years ago – and Tory MP Peter Bone. Almost everyone in the square was white, though a good number of BME Londoners milled about. For London, that is a novel demographic, but its appearance could be deceptive.

Two young female civil servants, one of mixed race, one Asian, were there as the Brexit deadline passed. Among the group they were with was a smiling Asian guy in a Brexit Party beanie, who unbuttoned his overshirt to show that he wore a Brexit Party T-shirt too. The civil service pair were more ambivalent. One said she’d come to witness “a seismic moment. We wanted to be part of it”. The other thought the big moment was an anti-climax. Both said they were “really wary, in two minds if we should come”. One had walked through a Brexit march a few months ago, where the marchers had matched the aggressive, xenophobic stereotype. But in the square, she had been pleasantly surprised: “There hasn’t been trouble. I haven’t heard anything. It feels like a nice people event – people coming together”.

Earlier, Sadiq Khan had spoken at a reception held at City Hall for what were still at that point fellow EU citizens. He described the moment as one at which to “feel regret” but said tomorrow would be “a new day and an opportunity to build a future in a European image”. People sipped coffee, commiserated, and completed the sentence “I am a Londoner because…” on white “London Is Open” cards provided. “I can meet the world in one place,” said one. “I was born in London, even though my parents are from Poland and Ireland,” said another. Also: “I can get anywhere without needing a car.” 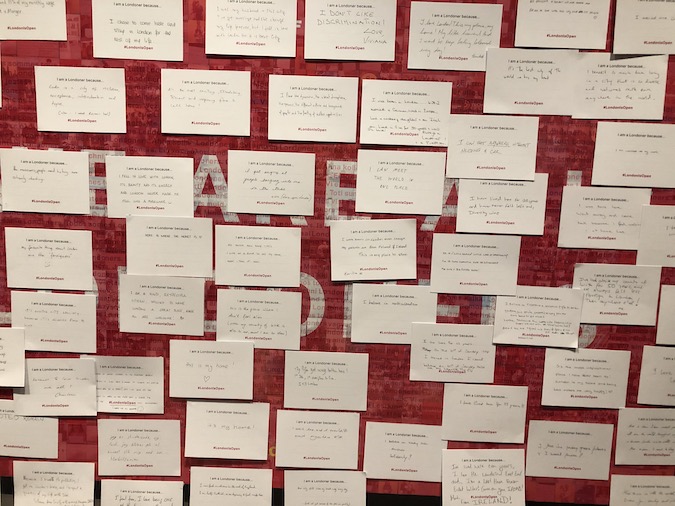 Outside, the Thames rolled on and Friday night drinkers speaking in many languages spilled out of bars on to the streets of Bankside and Queen’s Walk on a mild January night dampened by rain. At the London branch of US steakhouse chain Smith and Wollensky, Rishi Fernando, a 25-year-old Conservative councillor from Hertfordshire, was holding a celebratory Brexit dinner. “Six months ago people were saying we would never leave the EU” he said. “Now the EU know they have to take us seriously”. One of his guests, St Alban’s councillor and international businesswoman Stella Nash, says her aspiration for Britain is to be part of “a global family, not a tribal family,” with “people being able to talk together and work together for a suitable solution for both”.

Back at Parliament Square, The Final Countdown played. Clumps of police officers, looking on, appeared relaxed. The Farage Moment was nigh. Alexandra Swann, a young former aide to Farage, thinks he has been smeared as a “Katie Hopkins-esque figure of hate. The Nigel I knew firmly believed in [leaving the EU] for reasons of sovereignty and national freedom. All I ever saw is someone who believes in democracy”. She added that her own feelings have softened from being “ardently pro-Brexit” to acknowledging that for some, departure day was quite a sad thing. 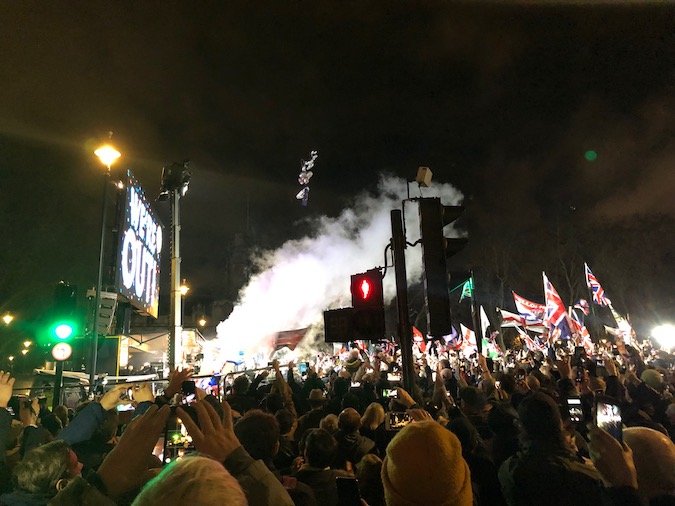 Farage himself struck a conciliatory note, at least insofar as he expressed confidence that Boris Johnson would continue doing “all the right things – something I never thought I’d say about a Conservative Party leader”. He declared: “For the first time in history, the people have beaten the establishment, and that we shall celebrate!” Democracy has won tonight!”

At the end, a moustachioed, immaculately dressed gentleman with the air of an armed services veteran made his way along Broad Sanctuary. He was predictably pleased and relieved – “I’ve had enough of being ruled by Germans” – and optimistic that Remain sulking will quieten down. He hopes that in a few years time, “Britain will be making friends all over the world. Boris is a good, charismatic leader, we’ll be fine”. He added: “But I’m biased. I’m Nigel Farage’s father.”

Eleven pre-recorded Big Ben bongs rang out. Leavers began leaving, heading back to their homes in London and beyond towards whatever they hope Britain’s future might bring.