Last summer, On London began a series of articles tracking the progress of plans to redevelop four blocks of privately-rented flats and another that houses Westminster Council tenants in order to create a new piece of south Belgravia to be called Cundy Street Quarter.

The developer, Grosvenor Britain & Ireland, foresees an attractive mixed-use scheme with better streets and amenities and homes for market sale and “senior living” along with two types of “affordable” housing, half of it for intermediate rent and half for social rent, including dwellings in which current council tenants can be rehoused.

Grosvenor wants its approach to this project to be seen as exemplifying its desire to improve public trust in developers and increase enthusiasm for regenerations that promise more and better housing and neighbourhoods. But their plans have attracted energetic and well-publicised opposition from some of the council tenants and others from the private blocks, with backing from the local Labour Party.

The distractions of the general election and the festive season have meant no On London coverage of this highly instructive case study since October. What has been happening since then?

Quite a lot. A third round of consultations with residents of the existing housing and other local residents was held in the first week of December, seeking views on detailed design plans. A further drop-in day for people to look at and discuss Grosvenor’s proposals took place last week.

Prior to all that, on 4 November last year, a meeting took place between representatives of Grosvenor and some of the campaigners against the scheme who live in the social rented homes in a block called Walden House, which is leased by Westminster Council from Grosvenor.

One of the leaders of the opposition campaign, Walden House tenant and Labour activist Liza Begum, described the meeting, which was attended by the then Grosvenor chief executive Craig McWilliam, as “informative”, though she complained that she “could not get confirmation about where we would live if demolition goes ahead”. However, she added that a dialogue had begun.

Much more recently, on Tuesday, Begum described on Twitter a meeting she had had with an officer at Westminster, complaining that she had received “no concrete answers” about the rehousing of Walden House tenants and claiming that Grosvenor and the council “keep misinforming us and constantly pushing the responsibility onto each other”. The backdrop here is that it’s yet to be decided who the landlord of the replacement social rented homes will be. However, the council, has committed to giving Walden House tenants a “right to return”. 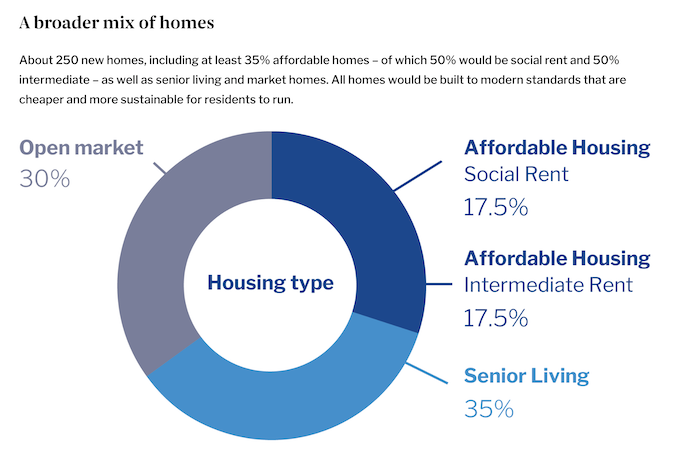 There will be opportunities later this month for Walden House residents to take a closer look at the designs for the replacement homes they might be offered. Meanwhile, Grosvenor has been working on setting up a community forum for sharing ideas about Cundy Street Quarter, both before and after a planning application is eventually submitted to the council. They have also been talking to the Young Westminster Foundation, a partnership-building charity, about what younger people might want from the development.

Like so many regeneration projects, especially those that entail the destruction of peoples’ homes, the Cundy Street Quarter vision is not being warmly embraced by all those who would be most directly affected by it. At the same time, others, perhaps including some of those who will need to be rehoused, might be seeing it as means by which their lives and neighbourhood can be improved. Having picked up the threads of this particular story, On London will be following them up in the coming weeks.