Faiza Shaheen’s bid to unseat Iain Duncan Smith in Chingford & Woodford Green has been one of landmarks of the 2019 campaign. The economist with an inspirational life story is a passionate researcher and campaigner on inequality and seen as an articulate and credible champion of the Labour Left. She has attracted huge crowds of volunteers pouring out of the area’s train stations, plus celebrity appearances from Hugh Grant, Ken Loach and Billy Bragg and prominent Labour figures.

Last Sunday, I met couple who had come from Bury St Edmunds, while Nida Kirmani, an old friend of Shaheen’s from when they were doing their doctorates at Manchester University, was over from Lahore. Twenty-three year old Raquel Jesse, who works with Shaheen at think tank CLASS, says turning up to “a sea of red stickers and badges, it felt like it was impossible Faiza wouldn’t win”. It was Raquel’s first experience of Labour Party activism, which then inspired her to campaign in other marginals, including Harrow East, Putney, Battersea and Wimbledon.

Shaheen supporter Katie Taaffe, who has been tending canvass boards during the campaign, moved to Highams Park from Islington 20 years ago. She describes it as being a “white ‘working-class done good” area  then. But over time I think it’s gradually become more middle-class with a conscience”. Her 18-year-old daughter has been convincing friends who are the children of traditional Tory voters to back Labour.

The constituency is a mix of distinct neighbourhoods, all with their own character: Chingford, South Chingford, Highams Park, Woodford and South Woodford. Located at the edge of Essex, it’s seen as almost stereotypically Tory territory, previously represented by Norman Tebbit and (as part of a predecessor seat) Winston Churchill. But it is now in the midst of rapid demographic change, with an increasing BAME population and young professionals arriving from Inner London. Meanwhile, 2015 TUC research shows strikingly that almost half of jobs in the seat are low paid. In the referendum, the constituency is estimated to have voted very narrowly to Remain, by 50.1 per cent.

Cutting through all these intricacies, the area’s MP since 1992 Iain Duncan Smith confidently tells me: “One thread that unites here is they don’t like Corbyn, and Shaheen is a rock-solid Corbynista”. When I join Labour canvassers on another occasion, I heard sharp rebuffs on the street, some in plain Anglo-Saxon, about the Labour leader. Some solid Labour voters are cool on him: on a winding road of semis, one man says he “knows him of old” and can’t in all conscience vote for him; in a flat in Highams Park, a woman called Jacqueline tells me she feels in a bind about how to vote: “It’s about the people… Politics is [now] about personalities which it shouldn’t be”. Some of the resistance is Brexit-inspired: “We’re not voting Labour, we’re voting for democracy!” says one household. 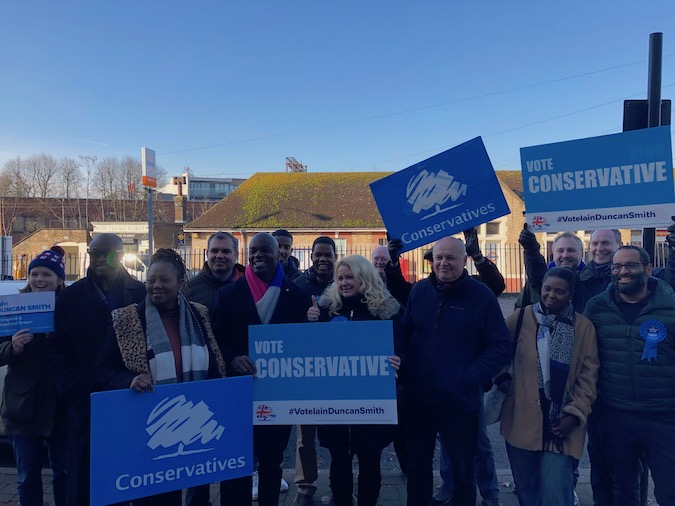 But Shaheen has a candour about the choice in the election and a personal appeal that wins over doubters, supporters say. “Even with those people [who dislike Corbyn] she cuts through. Her work goes down a storm” says Mike, a veteran activist from West Ham. Nida Kirmani was with Shaheen in Woodford and was impressed by how she’s developed patience and understanding of those with very different viewpoints to her own: “She made rational calm arguments. She wasn’t patronising. I saw people change their minds”. Off her own back, Shaheen came to a local agreement with the Green Party not to run against her. “I had a sit down with two senior members of the party” she says. “I’d met one before, I knocked on his door when campaigning. I’ve done a lot on green issues so we had common interests. Good on them, they are doing it in lots of places”.

Shaheen has very personal and moving reasons to take on Duncan Smith. Her mother, who had a heart condition, spent years fighting for disability benefits and social care and faced a fitness to work assessment before her death in 2017. Shaheen says she was stung by her opponent’s unfriendliness when they met at a BBC broadcast, shortly before she was nominated as candidate, when he didn’t acknowledge her before or after filming.

Nationally, IDS can be cast as a pantomime villain. But how well does doing this work locally? One knowledgable local commentator who isn’t a Conservative rates him as a very good constituency MP, more proactive on local issues than Conservative local councillors and the neighbouring Labour MPs, the well-regarded Stella Creasy and John Cryer. A talking point for Labour campaigners is that, in contrast to their candidate who lives and grew up locally, Duncan Smith lives with wife Betsy in a country house in Buckinghamshire. But Duncan Smith himself points out that for 27 years he has had a house and flat in the constituency. He’s claimed elsewhere that that is where he spends most of his time and says he “doesn’t think [the issue] has much traction round here except among Shaheen’s adherents”.

The current political climate can create some strange alignments. Walking around Highams Park, Duncan Smith makes common cause with an older Green voter who doesn’t like the Labour leader and is hoping for an exemption for their vehicle when the Ultra Low Emission Zone is extended. Then there’s the impact of the scale of the Labour activism, which community campaigner and former Independent council candidate Trevor Calver say residents find “quite frightening”.

Dinah Glover of London East Area Conservatives accuses Labour of “a vindictive politics. They’ve set up their targets, rather than looking at spread of seats in the area and are less worried about what residents think than targeting IDS.” Starting big campaign sessions at the same time of day – meaning that canvassers come across the same voters – and careless use of voter data seems to have been counterproductive. One Conservative-voting household in Hatch End reports getting increasingly irritable over four visits by Labour.

Along with graffiti on the Conservative campaign office and a decomposing rat posted to IDS, reported hostile incidents include campaigners intimidating a female Conservative canvasser, threatening to break her phone, a wall brought down when a sign was pulled off it and Conservative voters hectored for supporting a “racist” party leader. Shaheen has been quick to condemn these and “all acts of intimidation, criminal behaviour and vandalism”.

Labour says its campaigners have been threatened and abused too – one with physical violence while out canvassing. “We’ve also had Conservative canvassers knock on doors of residents with Labour posters in their window, accusing them of being antisemitic, and Conservative councillors and Iain Duncan Smith telling constituents that “Corbyn will steal your house’”, Shaheen says. She accuses misleading information in the Tories “Cost of Corbyn” mailout of contributing to the toxic political environment.

On visits to the constituency, On London didn’t see evidence of insensitive Labour canvassers haranguing voters – at a more subtle level, volunteers were indignant at what they perceived as media bias against Corbyn and mystified at allegations of anti-semitism against the Labour leader. Calver says he was visited twice by separate sets of canvassers for Shaheen who both turned out to be from South London, and they had to demur when he raised local issues. “They want to discuss things with you, but when you try to, you get a blank,” he says.

After Friday, there may be a post-mortem on the effectiveness of mass campaigning. A veteran Labour campaigner and policy adviser says that there’s nothing wrong in principle with a campaign with lots and lots of people involved, as often happens in by-elections. The problem comes when the real purpose of door-knocking is forgotten: “You’re trying to identity who voters are, you’re not trying to have an argument”. The ultimate destination of the data is important: “I would hope activists listening on the doorstep to what people are saying carry the message back into the Labour Party”. Chingford Conservative activist Munish Chopra-Evans says that from his EU referendum experience, co-ordinating the Remain campaign for Waltham Forest, he’s learned that involving celebrities with political campaigning is a disaster, and that over-canvassing by Labour played into his Tory colleagues’ hands by getting locals annoyed enough to appear in videos for the Conservatives.

The novelty of big campaign drives shouldn’t be over-emphasised. On the eve of the 2015 election, Ed Miliband spoke proudly of Labour’s “five million conversations” with voters and Shaheen’s predecessor as Chingford Labour candidate, Bilal Mahmood, held “Unseat IDS” action days. Meanwhile, the current Conservative campaign in Chingford has been working the constituency very hard and refers to stats showing they’ve spoken to 20,000 voters since the election was called. The impact of volunteer door-to-door campaigning can’t be disentangled from that of direct mail, paid for out of central party funds, or the monster reach of parties’ social media messaging and the organic conversations that inspires, shaping the debate in myriad ways.

Will Labour’s decapitation strategy turn out to been strategically wise? Commentators have wondered whether Chipping Barnet, where Theresa Villiers won with a much slimmer majority than IDS in 2017, would have been a better prime target. Memories of 2015, when all the energy directed into trying to oust Nick Clegg is thought to have contributed to the loss of Ed Balls’ Morley & Outwood seat, leads to concerns about whether Ilford North – where Corbyn critic Wes Streeting doesn’t have Momentum support – and Enfield Southgate have been left insufficiently protected. On the other hand, a Labour campaigner in another seat pays Shaheen a backhanded compliment for drawing away all the “zealots” to Chingford to “force unabated Corbynism down voters’ throats”, leaving a better quality of volunteer and a nicer atmosphere in defensive marginals.

Shaheen sees things differently. “Our campaign to win in Chingford and Woodford Green is honest, positive and non-confrontational” she says. But there’s no avoiding the raw passion that drives much of this election campaign, in London and elsewhere, from all sides. In Highams Park, Katie Taaffe says, “I think it’s now become a grim determination by the youth to stop Boris. They won’t tolerate racism, sexism and prejudice against the working-class.”

This kind of politics may seem self-righteous and hyperbolic, leaving many crying out for a different tone. But it is where we are.