A Haringey councillor has spoken out against a “hard left, Corbynista, Momentum-dominated” Labour Party after being expelled from it for re-tweeting Twitter output by members of the new political party, Change UK.

Barbara Blake, 65, who first become involved in Labour politics in the early 1960s and has been a member for most of the decades since, had her membership terminated for breaching a rule against supporting other political organisations. “At a stroke, 40 years of activism have been wiped out without any due process or the opportunity to face my accusers,” she said. “I am extremely upset by how I’ve been treated.”

An unsigned letter from the national Labour Party’s governance and legal unit, dated 10 May, informed Blake that her membership had been automatically ended and included images of five tweets from March and one from April which Blake had re-tweeted as “evidence provided” to justify the decision.

But Blake strongly disputes these grounds, telling On London that, “At no time have I ever expressed support for Change UK or encouraged anyone to vote for them” and saying it is “the grip the hard Left has on the party both nationally and locally which has led to my expulsion”.

Most of the tweets in question reflected Blake’s support for a further referendum on the UK’s membership of the European Union and what she describes as her “increasing frustration with Jeremy’s Corbyn’s prevarication over Europe”.

Blake’s Twitter profile includes the words “Usual caveats apply”, which she says means that re-tweets should not necessarily be taken as endorsements of the opinions or individuals concerned. She says she received “no prior warning” from Labour that she might be banished, and was given “no sight of any formal complaint and no right of reply”.

She added, “It is amazing how quickly the Labour Party can act on complaints when it suits them, while complaints about antisemitism languish for years.” Blake also pointed out that, “A number of senior Labour figures have expressed supportive comments about Change UK, but they have not been expelled”.

Blake’s expulsion follows circulation of a letter written by Celia Dignan, the chair of Hornsey & Wood Green constituency Labour Party, to fellow members urging the withdrawal of the council Labour Group whip from Blake “pending the outcome of an investigation” into her Twitter activity and saying that that she could not see “how in the circumstances we can tolerate Cllr Blake remaining in the party”.

Dignan, a strong supporter of Corbyn, included with her letter – which was addressed to “comrades” and shared through What’sApp – a link to Blake’s Twitter feed and screenshots of individual tweets by her. Dignan described herself as “sickened when I think of the volunteer time given so freely by our dedicated party volunteers to elect people to office who show such contempt to party members”.

One Labour councillor, who did not wish to be named, has described Blake as the victim of a “witch hunt” and said what she had done merited no more than a warning.

Labour’s letter to Blake says she is now subject to a five year exclusion period before she can apply to re-join and that this can only be relaxed under what are deemed “exceptional circumstances”, although she can “challenge the validity of the evidence attached to this letter” in a written statement within 14 days. Blake intends to continue as an independent councillor and is considering how best to respond to what has happened.

Two of the tweets cited by Labour were about Change UK participating in the recent Put It To The People march in favour of a so-called People’s Vote on EU membership. One of these, by Ilford South MP Mike Gapes who left Labour to join the Independent Group of MPs which went on to form Change UK, drew attention to the participation of Labour deputy leader Tom Watson and Corbyn’s absence. 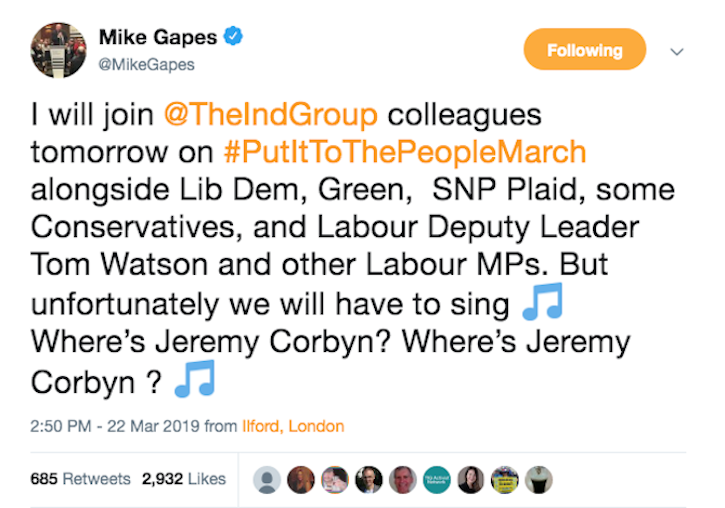 Blake also retweeted another Change UK MP, Gavin Shuker, thanking supporters of his party’s attempts in parliament to extent Article 50 and to secure a so-called People’s Vote, and a third, Chris Leslie, criticising Conservative Brexiter Boris Johnson. A tweet by a Change UK activist group criticising Labour MP Paul Sweeney for describing the departure of Labour MPs as a “necessary cleansing” of “self-centred careerists” re-tweeted by Blake was also cited along with one of Change UK interim leader Heidi Allen announcing the launch of the party’s European elections campaign.

Haringey & Wood Green CLP has issued a statement, co-signed by Dignan and the chair of Tottenham CLP, claiming that Blake had “repeatedly expressed her support on Twitter for Change UK,” which it describes as “a party set up to undermine Labour”. It contends that Blake has “betrayed” Labour Party members promoting the party locally.

Blake was among several sitting Labour councillors replaced as candidates for last year’s borough elections during a fractious reselection process, but was later chosen by party members in Seven Sisters ward as a successor to former council leader Claire Kober after she decided to stand down. Blake complained during that period of what she considered an unpleasant factional complaints culture in the party locally.

A campaign to remove councillors sympathetic to the Kober administration’s plans, now abandoned, to form a joint venture company with regeneration giant Lendlease to increase housing supply by redeveloping council-owned land was conducted by some local Corbyn-supporting Labour activists and members of other political parties. This led to the formation of a more Corbynite Labour Group and a council led by Joe Ejiofor, a member of the pro-Corbyn activist group Momentum.

Internal divisions have continued, however, and deputy leader Emine Ibrahim is currently being challenged for her position by fellow Labour councillor Zena Brabazon. A vote of the remaining 41 Labour Group members will take place on Monday. There have been continuing rumours of attempts by some group members and activists to replace Ejiofor as leader, but On London understands that party rules do not currently permit a formal challenge to him to take place.

On New Year’s Eve, Ejiofor sacked two members of his cabinet who he suggested were not capable of working closely with the rest of his team. Another cabinet member resigned in March over what he termed “imprudent” financial decisions. The council was hit last year by the resignation from the council of Ishmael Osamor, whom Ejiofor had made a deputy cabinet member, after it emerged he had been convicted on drugs charges.

Blake claims her support for Kober and the joint venture company plan, known as the Haringey Development Vehicle, have made her a continuing target of the Corbyn Left locally. In February, Labour Group chief whip Gideon Bull criticised some fellow councillors for “unprofessional” conduct towards others and demanded an end to “personalisation of debates”, to “barking and growling at meetings”, “bullying” and “bad mouthing and rubbishing of colleagues behind their backs”.