Skip to content
Most ballots of residents under Sadiq Khan's rules have produced comfortable pro-regeneration outcomes, but a recent one in Tottenham was different
Dave Hill

Sadiq Khan’s introduction of referendums into the often-fraught issue of estate regeneration was welcomed by some and questioned by others. Those most strongly in favour were often Green, Corbyn Left and other housing activists, who perhaps anticipated that council and housing association tenants would rise up against alleged “social cleansing” and reject redevelopment plans. Others feared such ballots would add cost and delay to increasing housing supply and physically improving neighbourhoods – including for those already living in them – and in the process heighten anxiety and discord.

In the event, every such ballot held so far except one has produced a decisive “yes” result. That outcome is a precondition for receiving funding support from City Hall for putting demolition and rebuild into effect. Those “yes” votes include the one completed on 6 September by residents of the 297-home Love Lane estate in Tottenham, which stands on the other side of Tottenham High Road from the resplendent new stadium of Tottenham Hotspur.

However, the Love Lane outcome was close: 113 in favour and 90 against, a majority of 55.7 per cent on a high 69.4 per cent turnout. And the build-up to polling day, along with the recriminations that have followed, has shown how estate resident ballots can become bitter and divisive battles.

There was a lot at stake. The “yes” vote has released £91 million of government-supplied affordable homes funding from City Hall to help pay for Labour-run Haringey Council securing 500 new council homes within the wider High Road West redevelopment scheme, which has been in slow gestation since at least 2014. An alliance of campaigners against the redevelopment made strenuous attempts to bring about a “no” vote. The council responded in a manner it thought fit. Allegations of dirty tricks have emerged from both sides.

Front and centre of the drive for “no” was campaign group Defend Council Housing, whose Haringey branch secretary, Paul Burnham, is well-known to the council for interventions about tenants’ rights, rents and conditions. Also prominent was a group called TAG Love Lane, representing some of the estate residents who’ve been living there on a temporary basis (TAG stands for “temporary accommodation group”). Local activist Martin Ball, a regeneration sceptic and relentless critic of the council, was also busy on the scene and on Twitter.

Much “no” campaign ire was directed at the scheme’s developer, Lendlease, the international property giant which, famously, was the previous – and very different – Labour administration’s proposed partner for its Haringey Development Vehicle. That tie-up would have seen other housing estates and council-owned buildings redeveloped, but became the focus of the successful Momentum-led campaign to get rid of councillors who backed it.

The High Road West project, however, fell outside the HDV’s scope. Council tenants have been moving to other accommodation for a few years, initially in the expectation that the regeneration would happen soon. Its failure to do so has led to vacated homes being offered as temporary dwellings for some of the thousands of people on Haringey’s waiting list. By the time of the ballot there were 226 of them compared with 43 remaining secure tenants and 25 resident leaseholders.

The ballot was unusual in that, largely because they had come to form the majority, temporary residents were included in its franchise if they had lived on the estate for at least six months. Prior to that, under the previous administration – and prior to the City Hall money becoming available, which has greatly boosted the number of new council homes in the scheme – temporary residents had been offered secure tenant contracts in the new housing. TAG had asked for this, and the council’s landlord offer confirms its “guarantee” to that effect.

But over the summer as ballot day neared, the “no” campaign intensified and changed. TAG accused the council of seeking to “con” residents into voting in favour and distributed its own “advice pack”, which urged residents to ask the council for a “legally binding guarantee of the promised new home” to be personally signed by Ahmet and to vote “no” if one wasn’t provided, which was, of course, never going to happen. Around 40 of these dummy contracts were eventually received by the council

Residents were told by Defend Council Housing (DCH) that neither the council nor Lendlease could be trusted and that once the estate land was transferred to the developer under the terms of the deal, it would, in the words of a DCH leaflet shown below, put into effect its own housing policy and “get rid of the concept of affordable housing entirely”. Like TAG, DCH claimed the council’s guarantee to temporary residents was no such thing. 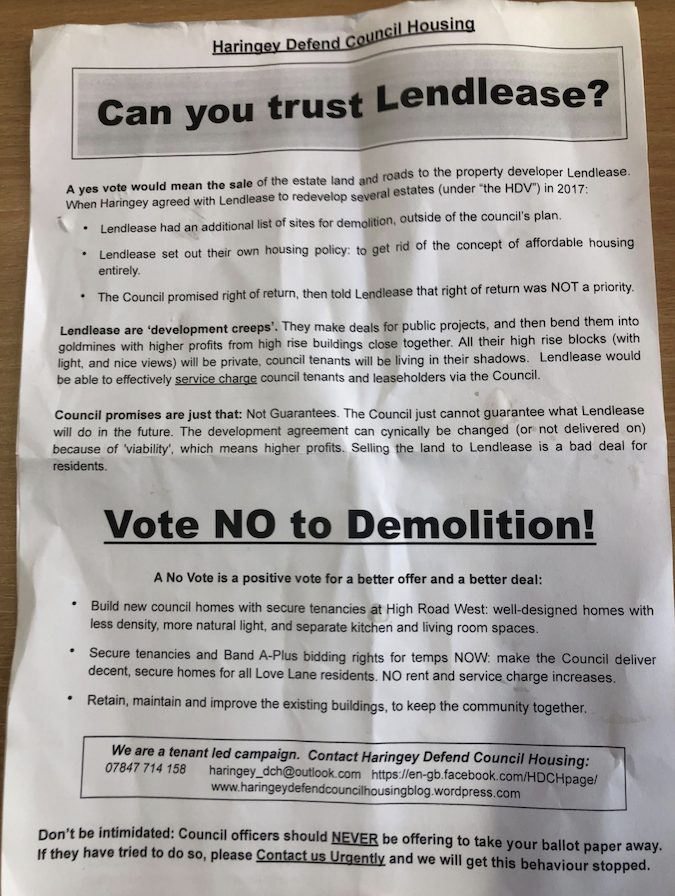 Once word of such activity reached the council, including from council tenants of long-standing whom housing officers knew well, those within the authority who were alarmed by what they heard decided they had a responsibility to respond.

The view was that mischievous disinformation – about tenants’ rights and future rent levels, for example – was being spread among residents, many of whom are vulnerable people with a poor command of English. It is claimed that activist pressure to vote “no” amounted to intimidation, with some residents expressing fear of voting “yes” in the ballot in case “no” campaigners found out.

Haringey housing officers went out and knocked on doors, reiterating the terms of the landlord offer (it is understood that an allegation that they turned up en masse on a Saturday night is strongly refuted). During this process, some of them came to believe that “no” campaigners had impersonated council officers on doorsteps. Photographs were taken of them as they went about their work and published on social media. In one, tweet housing officers were described as “pushers“.

Shortly before the voting period ended, another player in the drama took the stage: Damian Tissier, who had for several years been retained by the council as an independent adviser to Love Lane tenants and leaseholders. Tissier said the council was “pushing through” the scheme without giving Love Lane residents enough time to absorb and understand its implications before voting began.

After the result, “no” campaigners set about trying to discredit it. A DCH press release sent out on 13 September alleged that “severe pressure” was put on residents to vote in favour of the scheme, contradicting the rules set out by Civica (formerly called Electoral Reform Services) which administered the ballot.

Approached to discuss how the ballot had gone, Civica referred On London to the council instead. The council’s position was already declared: Ahmet had immediately described the vote as a further example of a “collaborative approach to redevelopment” and that its result meant Haringey could now go ahead with implementing the scheme, including “building 500 new council homes” – a big step towards building 3,000 “over the next decade”.

Tissier, though, had an open letter published on the Defend Council Housing website, in which he wrote: “My experience on the Love Lane Estate is that estate ballots do not appear to have been set up to be working in the best interests of the local communities. Otherwise, why is it necessary for social landlords to invest so much time and resource in trying to convince residents to vote in favour of their projects.” And DCH has continued to suggest that the council behaved improperly in relation to what it terms “this huge social cleaning scheme”.

The council, meanwhile, has stuck to its position – one which cabinet member for house building, place-making and development Ruth Gordon is party to, despite having opposed the Love Lane scheme before she took up her present position under Ahmet’s relatively new leadership. What no one in council circles has yet said in public but which some strongly believe is that the “no” campaigners are the ones who behaved improperly, and quite disgracefully so.

One opinion that has reached On London through a reliable branch of the London government grapevine conveys deep disgust that Haringey housing officers, many of them women, seeking to help residents make up their own minds on the basis of the landlord offer rather than “no” campaigners’ propaganda were being “followed around by white men in their fifties who already have nice homes in Haringey”.

Behind the rancour and accusations, the basic arguments about estate regeneration are the long-familiar ones. Hard Left and environmentalist protesters don’t want existing council or other social housing buildings knocked down, insisting that their residents always end up with a worse deal whatever guarantees are given and that it is always better to refurbish older dwellings that are in poor repair rather than replace them as part of some larger project involving cross-subsidy from the sale of private homes and higher densities. Others see a regeneration balance sheet from which the good, including more and better affordable homes, outweighs the bad in a context where public funds are limited and need is great.

Paul Burnham denies Defend Council Housing’s stance is  effectively more about impeding capitalism and “privatisation” than getting more people better and affordably housed. “It’s much more economical to retain and invest in the existing homes,” he says, “then to build more council homes via limited infill and redevelopment of council owned sites in the area”. He also raises concerns about future service charges and Lendlease’s involvement “increasing corporate influence and control over public policy in general and North Tottenham in particular”.

As for many of the council’s current Labour politicians, an irony here is that the stance of TAG and Burnham about housing, development and land is hard to distinguish from that which they took towards the HDV prior to the May 2018 borough elections and which effectively secured them their council seats. The selection process for next year’s borough elections has yet to begin. Perhaps it will prove to be a further demonstration of how bruising and turbulent democracy can be when the Haringey Left is involved.