London has felt curiously cut off from Paris over the past 18 months. However rarely you did it in practice, the idea of hopping on a train at King’s Cross and having lunch at the brasserie opposite Gare du Nord three hours later offered a reassuring sense of connection.

Fully frictionless travel remains a fantasy for now, but if we cannot easily visit our neighbours, we can at least peek over the garden fence. Research published this week by King’s College London, the University of Paris and Ipsos MORI gave a sense of how Londoners’ and Parisians’ views of their cities have changed over the last two years.

The report is rich in findings that illuminate the similarities and differences between the two cities and between spring 2019 and spring 2021 when the polls were carried out. Here are three highlights. 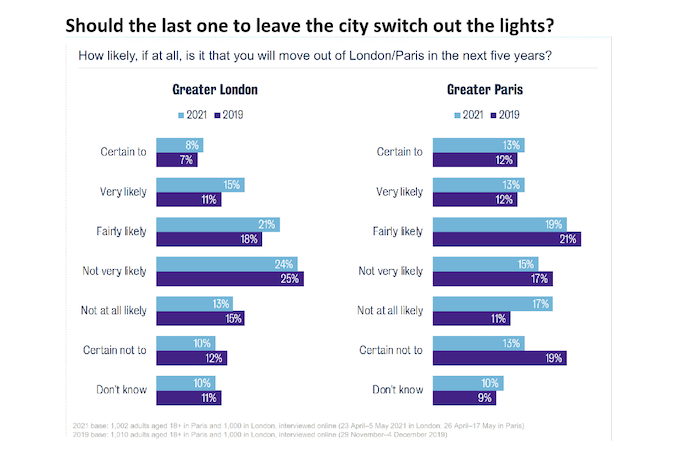 Contrary to apocalyptic predictions during the pandemic, neither city has seen a dramatic growth in people wanting to escape. London has seen a very small increase, and Paris no change at all. 43 per cent of Londoners expecting to leave over the next five years may seem like a big number, but recent years have seen 350-400,000 people leaving the city each year – nearly five per cent of the population. The survey does not suggest this is set to accelerate in the short term, though how many people have already moved out remains a mystery, and we do not know whether immigration will bounce back when borders re-open.

Drilling down to a local level, citizens’ satisfaction with their neighbourhoods remained as strong in 2021 as in 2019. We still like the places we live, despite being confined to them for much of the last year. Satisfaction with local public services actually increased as we saw the work done to keep the cities working, and a huge majority in both cities were keen on the “15-minute” city concept popularised by Paris Mayor Anne Hidalgo of having local facilities within easy walking distance. However, Londoners also placed a premium on good transport links – neighbourhoods matter, but so do the connections between them and city centres. 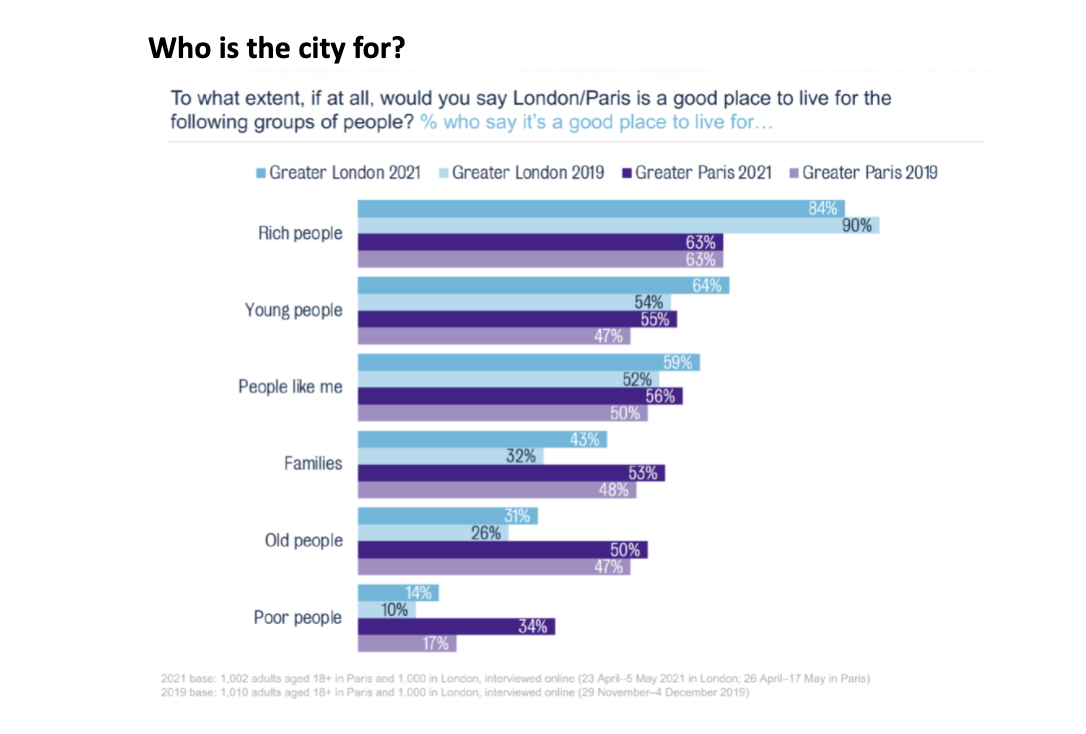 Londoners and Parisians have quite different views about which of their fellow residents their respective cities best serve. Londoners are a lot more likely to see their city as a place for business, for careers, and for rich people and young people, while Parisians think their city is more accommodating for families, poorer people and old people. For most groups – particularly families in London and poor people in Paris – the cities were seen as becoming better places to live over the last two years, perhaps reflecting the increased sense of social solidarity during the pandemic. 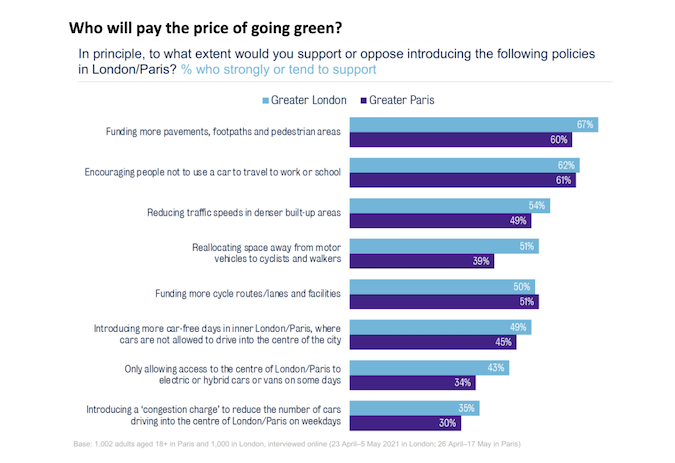 Londoners and Parisians shared a sense of urgency about environmental crises, with both groups picking out climate change and air quality as the priority problems. As the chart above shows, there was less consensus about solutions in relation to urban transport. Citizens in both countries were keen to see better facilities for walkers and cyclists and the promotion of alternatives to car use, but “harder” measures, such as restricting access to the city centre or charging more for driving, secured a lot less support (though a little more in London than in Paris).

We are all familiar with this dissonance – my essential vehicle use is your needless journey – and the experience of Low Traffic Neighbourhoods in London shows the impact it can have on securing consent for change. But the environmental challenges are not going away. Translating genuine concern about the issues in general to an acceptance of the inconvenience and cost of specific actions is one of the big challenges for city leaderships in the coming years.

Read the report in full here.