London’s first parliamentary by-election since the 2019 general election takes place tomorrow in the constituency of Old Bexley & Sidcup in the far south east of the metropolis. The election was caused by the death of the incumbent Conservative MP James Brokenshire, who had represented the seat since 2010 and was the MP for Hornchurch for five years before that.

Brokenshire was a generally well-liked and respected MP who was a safe pair of hands in a series of ministerial jobs, culminating in two periods in cabinet: first as Northern Ireland secretary (2016-18) and then as communities secretary (2018-19). There was a short gap between the two cabinet positions because he underwent a lung cancer operation. It was ultimately unsuccessful and Brokenshire died in early October at the tragically early age of 53.

Eleven candidates are standing in the by-election. It is very likely to be won by Conservative Louie French, who has represented the Falconwood & Welling ward on Bexley Council since 2014. If this is anything like a normal by-election, the Tory share of the vote will slide because of disaffection, low turnout and a desire even among traditional Tories to give the government a kick up the rear, though if a party starts at 64 per cent, as the Tories will in Old Bexley & Sidcup, it can slide a long way without coming close to losing the seat. The interesting questions concern how much disaffection there is and how it is expressed.

The seat is not a part of the suburban and exurban “Blue Wall” in the Home Counties, whose long-term Conservative allegiance may be wearing thin as graduates and professionals tire of a nationalist and less than professional-looking government. June’s Chesham & Amersham by-election demonstrated that even very Tory seats fringing London can fall in by-elections, but there are important differences between that seat and Old Bexley & Sidcup.

The most important is that there are many fewer graduates – 22.6 per cent compared with 41 per cent in Chesham & Amersham – and upper-level professional and managerial workers, and all its other demographic indicators point towards this being a  seat that is full of the sorts of people who have become increasingly Conservative in recent years. Old Bexley & Sidcup is as much white van as it is white collar.

The seat’s population is more typical of England as a whole than of London. Its population at the time of the 2011 Census was 89 per cent white, compared to 59.8 per cent in London and a UK average of 87 per cent. It may be lower than that now due to movement of ethnic minority people to the suburbs, but the area has not been transformed. Similarly, its proportion of people aged over-65 is, at 19.2 per cent, slightly higher than that of the UK (18.6 per cent) and a lot more than London’s (12.2 per cent).

It is overwhelmingly owner-occupied in terms of housing – 79.8 per cent, compared to 63.5 per cent nationwide and 48.3 per cent in London. The constituency is dominated by car-owning households – 41.6 per cent of London households do not have a car, more than twice as high a proportion as Old Bexley (19.5 per cent). Bexley borough voted 63 per cent to Leave the EU in 2016, making it one of only five with a Leave majority.

This is, therefore, potentially one of the more promising constituencies for the non-Tory right, especially at a by-election, although there is a lot of competition. Four, arguably five, candidates to the right of the Conservatives are standing in the by-election. Richard Tice, leader of Reform UK, the successor to Nigel Farage’s Brexit Party, is best placed in terms of money and profile as well as on Europe and migration, and has been agitating against Covid restrictions. Fringe right parties took four per cent of the vote at the London Mayor and Assembly elections in May, and it would not be a surprise if its total share went over 10 per cent on Thursday, with Tice saving his deposit.

Labour’s candidate is Daniel Francis, a locally-resident councillor representing the more Labour-inclined north of the borough. He has been on the council since 2000 and led the Labour group from 2017 to 2021. Francis’s campaign has been assisted by the large Labour membership in London. There are some reserves of Labour votes in the constituency, but it is hard to see the makings of a Labour win here. Realistically, anything above 30 per cent would be worth celebrating for the party.

It will be interesting to see if Tice finishes ahead of Liberal Democrat candidate Simone Reynolds. The Lib Dems have little history here, and there appears to be a tacit understanding between them and Labour centrally that the prime target of Lib Dem campaigning will be the North Shropshire by-election coming later this month while Labour’s main fight is in Old Bexley & Sidcup.

In all the circumstances, anything much above a 50 per cent vote share would be a reasonable result for the Conservatives. Much below that would point to the onset of a classic case of mid-term blues.

The seat has a long and interesting history. Old Bexley & Sidcup forms the southern section of the London Borough of Bexley. The core part of the constituency, which has been within the seat since its creation, is the suburban zone between the A2 road linking London and the Medway Towns and the A20 as it heads for Maidstone and the coast.

These residential suburbs are largely products of London’s outward sprawl during the inter-war period as roads and suburban railways enabled people working in London to live in single family houses among green avenues. The suburbs engulfed a number of older Kentish villages such as Foot’s Cray, Sidcup and Bexley (Old Bexley) itself. Until 1965 the whole area was administratively part of Kent and it has still not fully embraced a London identity. 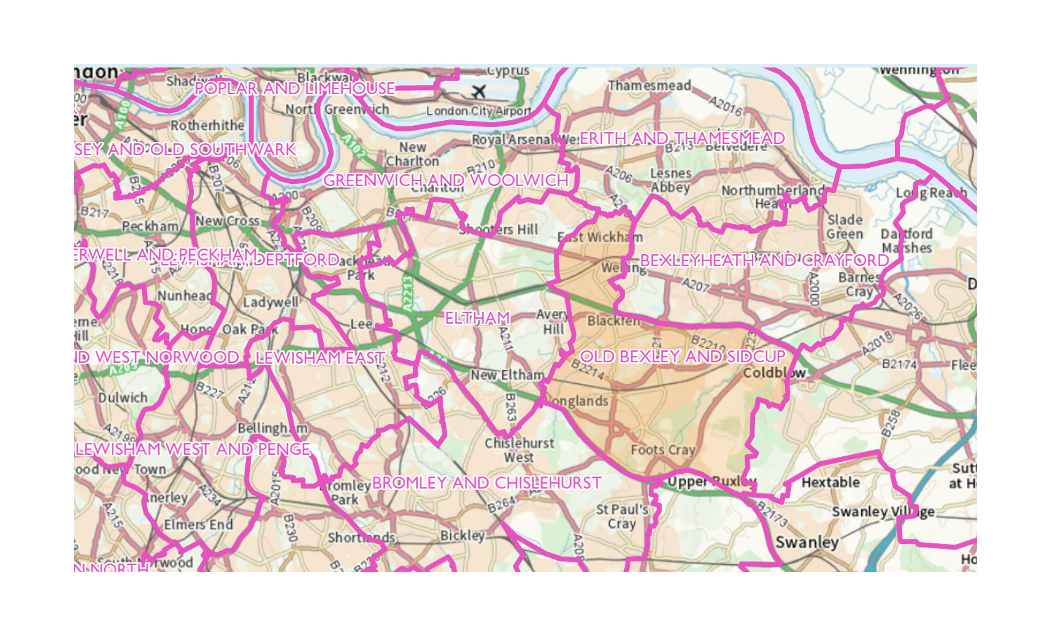 Before 1974 the area was split between two constituencies named Bexley and Chislehurst. The first two elections for the Bexley seat, in 1945 when it was created and a 1946 by-election, produced Labour victories. But in 1950 it was gained by the Conservative candidate, a Mr Edward Heath, and held by him for the rest of its existence.

Heath’s majority dipped to only 2,333 votes (4.3 per cent) in 1966 in his first election as Conservative Party leader, but it bounded back upwards in 1970 when he surprisingly became Prime Minister. The Chislehurst seat, which originally contained the Sidcup area, was a semi-marginal that mostly returned Tories but went Labour in 1945 and 1966.

The new Sidcup constituency contained the most Conservative-supporting parts of the two predecessor seats, making it a plum selection contest target. Heath became its candidate, taking precedence over the erstwhile Chislehurst MP Patricia Hornsby-Smith despite the seat containing more of the former Chislehurst area than of Bexley’s.

Sidcup was represented by the Prime Minister for only the first three days of its existence. The 1974 general election saw Labour win the largest number of seats in a hung parliament, but Heath tried to assemble a deal to stay in power. On the third day he gave up and Labour’s Harold Wilson returned to Downing Street.

Heath continued as Leader of the Opposition until February 1975, when he was replaced as Tory leader by Margaret Thatcher but he continued to represent his constituency, whose name was changed to Old Bexley and Sidcup in 1983. He finally retired at the 2001 general election. His majority in 1997, the last time he stood for parliament, was reduced to only 3,569 votes (7.0 per cent), reflecting the huge swing to New Labour in the London suburbs and, to some extent, the 1997 boundary changes.

The fall in the Tory majority made Old Bexley & Sidcup a long-shot target for Labour in 2001. It was hoped that the loss of Heath’s personal vote – it is arguable that backing Heath was the best way for local voters to irritate the Tory leadership of the time – and the continuing weakness of the Conservatives might open up an opportunity, but it was not to be.

New Conservative candidate Derek Conway, who had lost Shrewsbury & Atcham in 1997, was elected on a low turnout ahead of Jim Dickson, the staunchly New Labour former leader of Lambeth Council with a reduced numerical majority (3,345 votes) despite a small pro-Tory swing. Conway represented the seat until 2010, but lost the Conservative whip in January 2008 because of an expenses scandal that was a precursor of the larger one of 2009. James Brokenshire, whose Hornchurch constituency had been abolished by further boundary changes, was his successor.

The Conservative share of the vote in Old Bexley and Sidcup has risen in each general election since 1997, with the exception of 2015 when a strong UKIP performance ate into the Tory vote. It has since returned to the sort of 60 per cent share Heath enjoyed in the 1980s and in 1992. Labour did exceptionally well in 1997 and 2001. Its more normal level for a half-decent parliamentary election is the high end of the 20 per cent range (2005, 2017) and at the low end in a bad one. Labour normally comes in a clear second in parliamentary contests, although in 1983 and 1987 the Liberal SDP Alliance overtook and UKIP came close in 2015.

The Conservatives are also dominant in other elections. In this year’s mayoral vote, Tory candidate Shaun Bailey’s lead was a little larger than Brokenshire’s in 2019, with 62.6 per cent voting for him and only 17.8 per cent for Labour’s victorious Sadiq Khan. There is little political variation among the wards that make up the constituency. The Conservatives won by landslides in both the mayoral and London Assembly votes in every one of them in May, the main distinction being between places they won by around 35 points (East Wickham, Falconwood & Welling, Longlands, Sidcup) and the other three which they won by something like 45 points. Blackfen & Lamorbey and Blendon & Penhill were among Bailey’s top ten wards across the city.

The constituency’s representation on Bexley Council consists entirely of Tories and the only non-Conservative elected since 2006 was a UKIP councillor in Blackfen & Lamorbey in 2014. The 2002 elections showed a bit more variety: Labour won the Cray Meadows ward in the south east corner around Foot’s Cray, and East Wickham ward returned a split delegation of two Labour and one Lib Dem that year.

Seven years later, in February 2009, East Wickham almost caused a by-election shock when British National Party came within nine votes of winning. It was no coincidence that the BNP’s headquarters in its heyday was in adjacent Welling, which also falls into Old Bexley & Sidcup. The BNP polled over 10 per cent in the local elections of 2010, and seven per cent as recently as 2014. Anti-European nationalism has also been popular; UKIP took 24 per cent across the constituency in the 2014 local elections, making it 31 per cent for parties to the right of the Tories in that year.

The Conservatives would have to shed a lot of votes to the populist right, to Labour and to abstentions to make Old Bexley & Sidcup anywhere near competitive in a by-election. The 20 per cent swing required is astronomical and earthquakes on that scale have only happened in periods of extremely intense government unpopularity, such as 1968 and 1994. There is nothing yet to suggest that the Johnson government is in anything like that much trouble.