Sadiq Khan’s Deputy Mayor for Environment and Energy has made a firm defence of the Silvertown Tunnel in the face of continuing calls by campaigners, political opponents and some in the Labour Party for the project to be scrapped.

Speaking at think tank Centre for London’s annual conference Shirley Rodrigues said building the tunnel, which is due to open in 2025, is “the right thing to do” in order to relieve polluting traffic jams at the Blackwall Tunnel further west and insisted it will not add to carbon emissions, worsen air quality or lead to increased road traffic.

She said the original plans for Silvertown, which preceded Mayor Khan’s City Hall tenure, have been improved so that as many as 37 zero-emission buses will travel through it beneath the Thames every hour, and stressed that both the Silvertown and Blackwall crossings will fall within the newly-expanded Ultra Low Emission Zone (ULEZ).

Both tunnels will also be tolled, which, like all forms of road-user charging, is expected to reduce demand and therefore limit traffic levels. “All of those things mean we are not forecast to see an increase in traffic, which will mean carbon emissions aren’t going to increase,” Rodrigues said, adding that the same applied to forecasts for air pollution impacts. 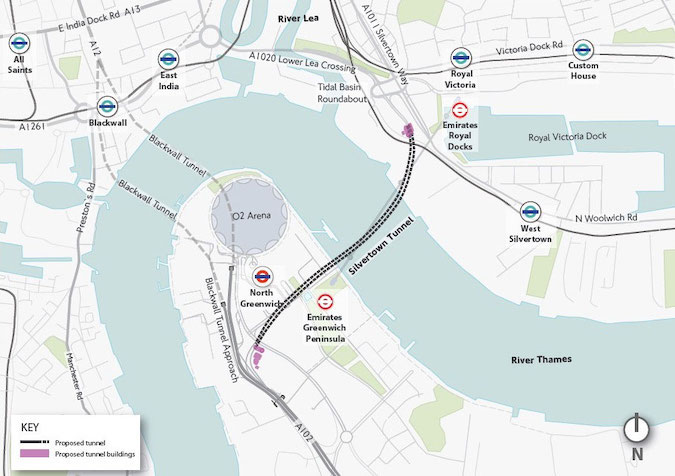 “Anyone that’s ever been caught up in a traffic jam caused by a delay in the Blackwall Tunnel will know the immense amount of gridlock that happens in that area, which leads to air pollution that comes from idling,” she said.

Rodrigues was upbeat about the efficacy of the ULEZ in prompting shifts to vehicles that comply with its standards and also highlighted that “95 per cent of heavy goods vehicles” are already in line with recently-tightened rules for the London-wide Low Emission Zone, which was introduced by Ken Livingstone and has been operating since February 2008.