Saturday’s London Councils Summit was left in no doubt by the organisation’s chair, Peter John, about the punishing effects of spending cuts on many Londoners and the need to lobby hard for a funding settlement with national government that recognises the special pressures brought about by a booming population and high levels of need. And councillors and others who attended the Guildhall event also learned a lot about what is on Londoners’ minds, thanks to a presentation of polling data by Ben Page, chief executive of Ipsos MORI.

Brexit, surprise, surprise, is bothering us a lot. It topped the list of individual issues we think important for the city with 20 per cent of respondents putting it there, slightly ahead of crime and policing (17 per cent), housing affordability (16 per cent) and cost of living as a whole (11 per cent). More than half of us (56 per cent) disagree with the proposition that “London is well-prepared for when the UK leaves the EU” (just 18 per cent do agree), and some particular anxieties emerged.

A huge 48 per cent of Londoners polled “strongly agree” that it is “vital that EU citizens working for the NHS and social care services can continue to work in London” and a further 26 per cent said they tend to agree” – a whopping 75 per cent overall who agree with that view to some degree, compared with a tiny six per cent who don’t. Also, 46 per cent of us in all are worried that some EU citizens won’t be able to stay in London after Brexit compared with 23 per cent who aren’t.

Housing? No less than 81 per cent agree that there is a “housing crisis” in the capital, a view strongly held across all tenure types and among all age groups throughout Greater London. Page picked up on a few specifics: the 33 percent who consider lack of social housing to be one of the three most important problems facing London’s housing market; the 26 per cent who put “too many people from abroad buying homes” into that category; and the “lack of connection” made between the supply of new homes (picked by 22 per cent) and the price of buying or renting being too high, which were the first and second items on the list at 57 per cent and 51 per cent. (Perhaps another disconnect, perpetuated by a populist narratives, is that between property investment from overseas and the provision of social and other affordable homes, much of which is indirectly paid for by such investors).

There was also strong agreement on a need for more “affordable housing in my borough, such as council housing” (69 per cent) and strong support for more “homes to rent from local authorities or housing associations” being built locally (66 per cent). There was also strong support for more homes to buy (again, 66 per cent). However, there was a sliding scale of enthusiasm for the size any new housing developments in respondents’ local areas, ranging from 68 per cent overall support for schemes of up to 25 homes to only 36 per cent for schemes of over 500. What style of housing? That had been explored in a previous survey. People want more mid-rise terraced housing, Page recalled, not tower blocks. 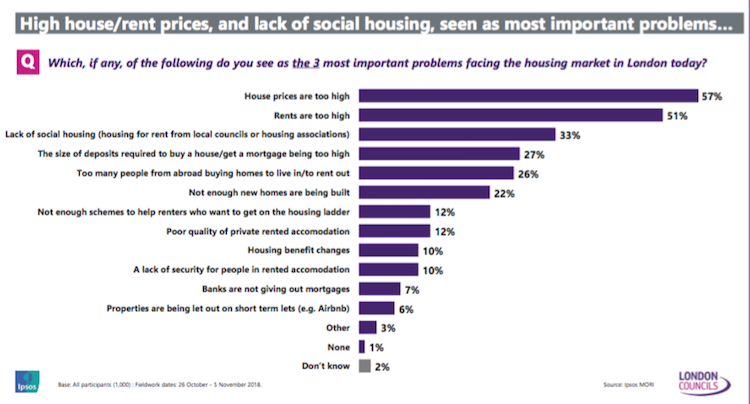 Londoners are also in favour of Right to Buy (52 per cent overall versus 21 per cent opposed) and would be a bit more so if all the money raised from it could be spent by the borough in which it was raised. And they firmly oppose incursions on the Green Belt: only 21 per cent are favour of them with 55 per cent opposed, and the numbers aren’t very much different in response to a question about allowing a review of bits of Green Belt that might be reclassified. Page noted that intensity of feeling on this issues varies little between Inner London boroughs and the suburban ones, where stronger opposition might be expected. Page noted, “this rather mythical idea that the Green Belt is something that looks a bit like their local park.” His point is probably not lost on Siobhain McDonagh.

Finally, what are Londoners making of their local councils these days? On housing, a considerable 45 per cent disagreed with the view that there isn’t much local authorities and the Mayor can do. “They want to hear about what you are doing,” Page concluded. More generally, 46 per cent of Londoners polled are satisfied with how their council runs things, particularly the young, which is not the usual finding.