Newham, Ealing and Southwark lead the list of London boroughs awarded funding by Mayor Sadiq Khan towards building over 11,000 council homes across the capital over the next four years, City Hall announced today.

Just over £1 billion in total has been awarded to 27 local authorities, including the City of London, for homes to be let at “social rent levels” along with a further 3,570 London Living Rent homes, which tenants can eventually own a percentage of.

Newham will receive nearly £107.5m, representing a boost to recently-elected new borough mayor Rokhsana Fiaz. Ealing will receive £99.3m and Southwark £89.5m, with Kingston, Brent, Hounslow and Croydon all receiving between £60m and £70m. Hillingdon, Sutton and Kensington & Chelsea are among the other beneficiaries. Kensington & Chelsea has recently announced that it wants to increase its own house building capacity as part of a new approach, post-Grenfell.

In May, the Mayor announced that the £1.67 billion that had been allocated to him by the government earlier this year would fund a programme he calls Building Council Homes for Londoners – part of his wider Affordable Homes Programme.

Today, he called on the government to increase funding for social rent and other affordable housing by fourfold “at least” and to devolve more powers to to London government to buy land. He welcomed Theresa May’s recent decision to lift the cap imposed on councils’ freedom to borrow for housebuilding in 2012, but said it must be “just the first step of reform, not the last.”

A full list of the Mayor’s council housing allocations is below. 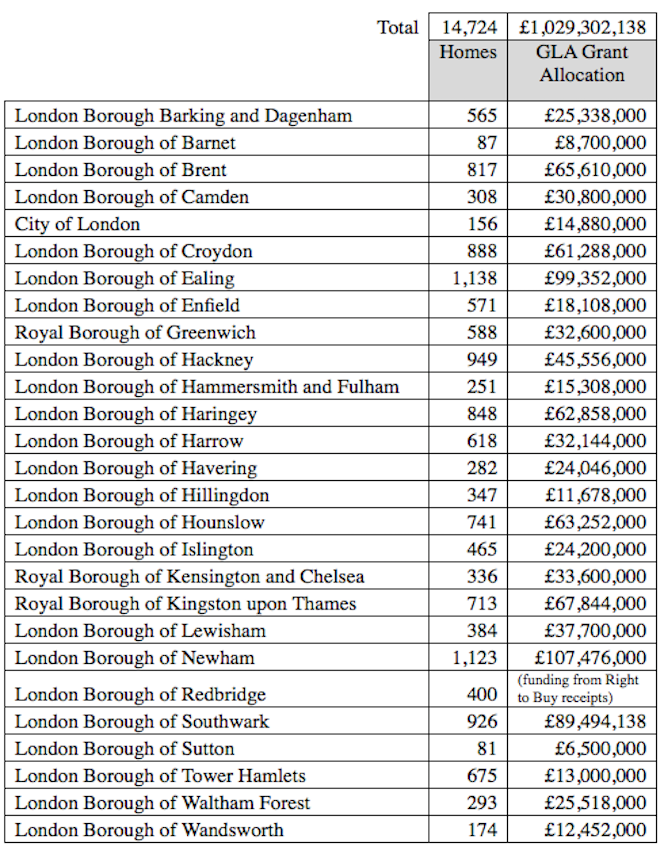