In a rare move, the MPF, which is the staff association that represents all Met officers up to the rank of chief inspector, responded sharply to Bailey writing on Twitter that a “police surge” should be implemented to “take back control of our streets”, by asking him to “please understand Police Regulations” and saying that Met officers are “already overworked and near breaking point”.

London Mayors automatically become the capital’s police and crime commissioner on election, and are responsible through their police and crime office (MOPAC) for setting police priorities and budgets.

After a fourth man was murdered in London in four days, Bailey tweeted yesterday that “these murders could have been avoided” and called for “immediate action” to ensure communities’ safety before urging City Hall to cancel all leave. But the MPF tweeted in response that officers are already owed 200 days’ leave. 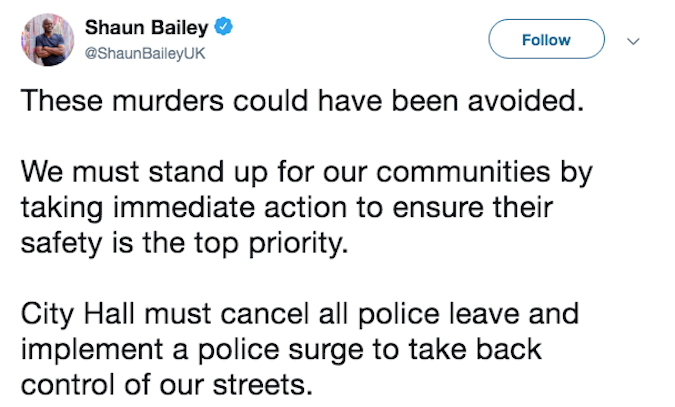 The suggestion by the body which looks after officers’ interests that the Tory candidate does not not know the scope of those powers will be seized on by opponents who claim Bailey isn’t up to the task of running City Hall. The MPF followed up on Twitter by telling Bailey that its chairman Ken Marsh is “happy to discuss” the issue of police leave with him. A community policing in team in Havering suggested he might consider becoming a Special Constable.

Labour’s national shadow policing and crime minister Louise Haigh said:“After helping implement savage cuts to police officer numbers as youth and crime advisor in Number 10, Shaun Bailey’s proposed solution is now to cancel all the leave of those officers who are left. This is utterly shameless and will not wash with Londoners who understand police officers are already stretched to breaking point as a result of the cuts he helped author.”

Bailey, a former youth worker, and his fellow Conservatives on the London Assembly have been arguing that Sadiq Khan could fund more police officers by diverting funds from elsewhere, and have claimed his response to recent increases in London’s murder rate has lacked urgency. However, a YouGov poll for Queen Mary University of London in the spring found that four times as many Londoners who believed knife crime in the capital had worsen in the previous year blamed the government as blamed the Mayor. 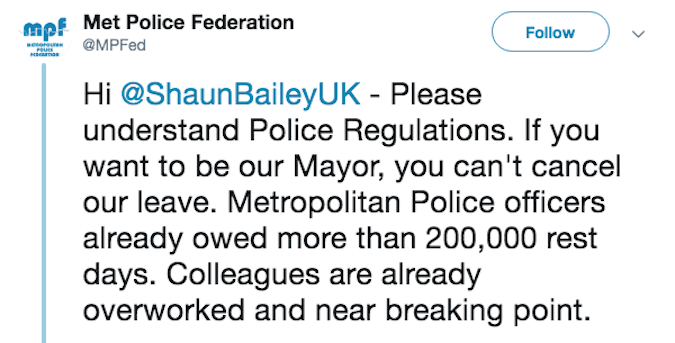 The exchange between Bailey and the MPF follows US president Donald Trump’s endorsement of a tweet by Far Right agitator Katie Hopkins in which she described London as “Stab City” and linked recent murders in the capital to Mayor Khan’s Muslim faith by referring to the city as Londonistan.