Skip to content
In bad-tempered exchanges, the politicians argued about where responsibility for the possible measure being introduced lies
Dave Hill

Sadiq Khan and the Conservative mayoral candidate clashed today over who would be responsible for any increase in Council Tax to pay for Transport for London continuing to offer free public transport travel to under-18s and people between the ages of 60 and 65.

In heated Mayor’s Question Time (MQT) exchanges, Tory hopeful Shaun Bailey, who is also a member of the London Assembly, claimed it had been the Mayor’s idea for the option of increasing his share of Londoners’ Council Tax to meet the cost of the concessions being included in the latest emergency funding agreement between the government and TfL.

Khan countered that this provision in the funding deal had been “a proposal from the government” which he was not keen on and that “the government is forcing us to do this”. Reading from a letter sent to him by transport secretary Grant Shapps dated 1 October, he quoted Shapps as writing: “Our proposal that City Hall should raise more from Londoners themselves through a supplement to the Council Tax and agreeing to raise meaningful amounts from April 2021 onwards will also be necessary to proceed to a longer term deal”.

Bailey, quoted accurately from the final agreement letter, dated 31 October, which says in relation to meeting the cost of the concessions in financial year 2021/2022 that, “TfL and the Mayor have proposed that this could potentially include to maintain the congestion charge implementation that was brought in in June 2020, subject to consultation and due process, and/or by increasing existing TfL element of GLA Council Tax.”

Khan, however, dismissed Bailey’s point as ‘Tory propaganda” and said he would be “more than happy” to publish the letter of 1 October if Shapps wished him to, stressing the link in its wording between the necessity for the Mayor to raise more money from Council Tax if a longer term deal was to follow.

Parts of the 1 October letter have been seen and reported by On London and before that the Financial Times revealed some of its content. The whole of the letter has yet to emerge. The full section from the 31 October funding agreement letter is shown below. 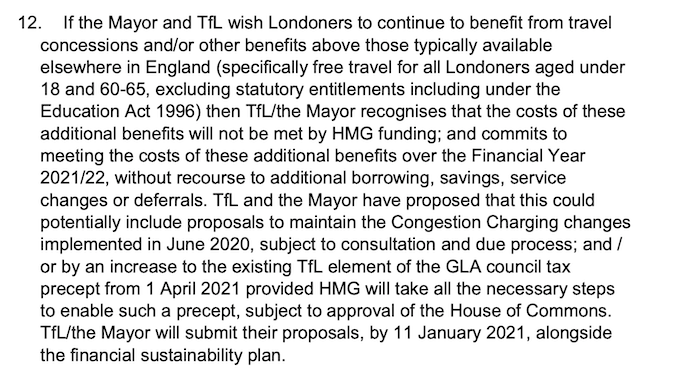 Bailey invited Khan to rule out any increase in mayoral Council Tax. The Mayor did not do so, but alleged that “the Conservative agenda” is to remove the free travel concessions completely.

The 31 October settlement says that any decision by the Mayor to supplement mayoral Council Tax would need to be submitted to the government by 11 January 2021, alongside a financial sustainability plan. An increase in the mayor’s Council Tax for funding TfL would  have to be approved by Parliament and would need to be included in the Mayor’s 2021/22 budget, which will be set in advance of the rescheduled London Mayor election on 6 May next year.

Free travel for under-18s was introduced by London’s first Mayor Ken Livingstone and TfL’s 60+ travelcard by his successor Boris Johnson, who is now the Prime Minister. On London has been told that Johnson’s transport adviser, his former media supporter Andrew Gilligan, pushed strongly for the removal of the under-18s concession during negotiations for the first TfL bailout in May.

Later in the MQT meeting Khan told Labour AM Alison Moore that it “beggar’s belief” that the government has yet to share with him or anyone at TfL an unredacted version of a report on TfL’s finances by financial consultants KPMG which the government commissioned. Earlier, Khan stated that “the sole cause of TfL’s financial problems is Covid-19” due to public transport passenger numbers plunging when the virus took hold.