Former Conservative London Mayor candidate Shaun Bailey is under renewed pressure to resign as a member of the London Assembly (AM) after Sadiq Khan described this as “surely an inevitability” following the emergence before Christmas of a photograph showing the Tory politician attending a party in breach of lockdown rules in December 2020.

Speaking at Mayor’s Question Time today Khan said people elected to public office have “an additional responsibility” to abide by Covid rules and pointed out that Bailey, who he did not name, had continued to chair the Assembly’s police and crime committee for exactly one year after the party took place before resigned on 14 December 2021 following the emergence of the photo.

Answering questions from Assembly Labour group leader Len Duvall, the Mayor noted that Bailey had subsequently resigned as chair of another Assembly committee and made no public appearance at City Hall until today, the first Assembly gathering at its new location, the Crystal building in the Royal Docks.

Invited by Khan and Duvall to take the opportunity to apologise to colleagues and to Londoners Bailey did not respond. Khan described as “flabbergasting” the possibility that Bailey “had circumstances been different, could have been sitting in this chair as Mayor of this city”. Duvall said the “silence” from Bailey and his fellow Tory AMs showed “contempt” for “those Londoners who made sacrifices and lost loved ones”. 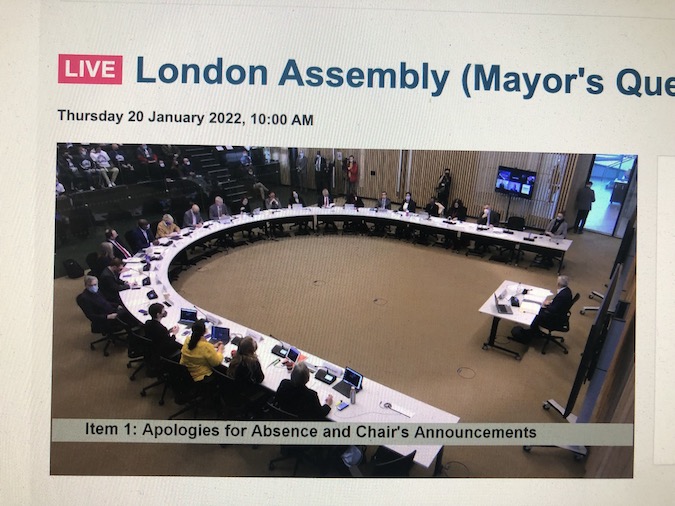 Duvall acknowledged that the Greater London Authority’s monitoring officer has concluded that Bailey’s attendance at the social event shown in the photograph, a Christmas party for his mayoral campaign team, did not fall within the scope of the GLA’s code of conduct as Bailey had not been there in his capacity as an AM, though he questioned the finding.

Conservative group leader Susan Hall has previously rebuked Bailey behalf of her Tory colleagues, describing the emergence of the photo, first published by the Mirror, as “deeply disappointing” and the holding of the Bailey campaign event, which took place at Conservative national headquarters, as “wrong”.

Green AM Caroline Russell, who has previously called on Bailey to “think about his position” as “an elected person in public life”, backed Duvall and said “it would be good if at least someone were to hold themselves to account in a way that is consistent with at least one of the Nolan principles of public life” – a reference to a set of ethical standards composed by judge Michael Nolan following the “cash-for-questions” scandal in the 1990s.

Another attendee at the Bailey mayoral campaign event, Bexley councillor Adam Wildman, has left the Bexley Tory group and now sits as an Independent councillor. Wildman is believed to have been the Bailey campaign’s political director. In a now-deleted Linked In entry Wildman described himself as having been London Assembly Conservatives’ chief of staff from December 2016 until January 2019.

The challenges to Bailey come with Conservative Prime Minister Boris Johnson in danger of losing his job following a string of revelations about lockdown social gatherings at 10 Downing Street and elsewhere in Whitehall.