Skip to content
The concession is being fought over by TfL and the government, but there are arguments for simply doing away with it
Dave Hill

I am 62 years-old and therefore the lucky holder of a Transport for London 60+ Oyster photocard. This means I can use most public transport in the capital for free, even though the terms of the first government bailout of TfL in May mean I can longer do so before 9:00 am.

Even as home-based worker of long standing who, in normal times, travels around the city only about three times a week, it is a welcome concession, especially as my income since becoming a (very, very) small businessman three years ago has dropped substantially.

That said, I feel a bit bad about having a 60+ Oyster photocard. Although my income is modest, I am not poor. Given the Covid-ravaged state of TfL’s finances, can the cost of my 60+ card be defended? Has this particular concession as whole really ever been acceptable?

First, let’s define exactly what the 60+ Oyster photocard is. Crucially, it is not the same thing as the Older Person’s Freedom Pass, which also enables free travel on London public transport (as well as free bus travel nationally). However, the two different cards are related in the sense that the former was created in 2012 as a result of changes to eligibility for the latter.

The Freedom Pass, as it is usually simply known (though there are other kinds that aren’t for older people), has been around since 1973. It was created by the Greater London Council. After that body’s abolition in 1986 it passed into the hands of London’s boroughs, though the age at which people qualify for it is set by the government. The cost of the scheme is now negotiated between TfL, rail companies and London Councils, which also administers it.

Londoners used to become entitled to a Freedom Pass on reaching the age of 60, but that changed in 2010. The government decided to start gradually raising the age at which people qualified for it, in tandem with changes to the state pension age. That meant Londoners turning 60 would have to wait a year longer to get their Freedom Pass and that others a little younger would have to wait still longer in the future.

London’s Mayor during that time was Boris Johnson. In May 2012, he won a second term, having promised those Londoners not getting a Freedom Pass until they were older than had previously been the case that he would find his own way to restore the old arrangement. On 1 October 2012, the 60+ Oyster photocard was announced and came into effect the following month.

There is, of course, a pungent irony in the fact that Prime Minister Johnson’s government is now spinning a crafty and misleading yarn that the 60+ pass, like free travel for under-18s, is somehow an indulgence Londoners enjoy at the expense of taxpayers in the rest of the country. But that bit of fibbing is separate from the question of whether the existence of the 60+ pass is still, or ever was, really justified.

Its creation by Mayor Johnson seems unlikely to be unrelated to the fact that Londoners of 60 years and over are the age group most likely to vote Conservative. It was also done in the full knowledge that its cost to TfL would rise and keep on rising beyond the end of that second term in May 2016. Eligibility for the Freedom Pass is now 66, matching that the current state pension age. Hence, the TfL 60+ card is presently available to all Londoners aged 60 to 65, after which they must apply for a Freedom Pass instead.

In February 2012, prior to the mayoral election in May of that year, a discussion note was circulated among City Hall and TfL decision-makers which set out Johnson’s options for creating his and TfL’s own free travel pass to “bridge the gap between the age 60 or 61 and the rising age of entitlement to the Freedom Pass” and what it would cost in terms of foregone revenue.

The note recognised that the train operating companies, which would have to be part of the new scheme if its benefits were to replicate those of the Freedom Pass, “would probably be unwilling to participate without significant compensation for the additional overcrowding they would claim would arise given that many of those aged just over 60 will still be in employment and travelling in the peak [travel hours]”.

The estimate was that if eligibility for the new TfL pass was set at 60 and introduced in September 2012 (two months earlier than turned out to be the case), it would cost TfL £7 million in the first year, rising to £19 million in 2013/14 and onwards and upwards to £85 million in 2019/20 as the age range to be spanned before Freedom Pass entitlement was reached grew wider. It would all add up to a cumulative loss of £342 million over seven years (see below). 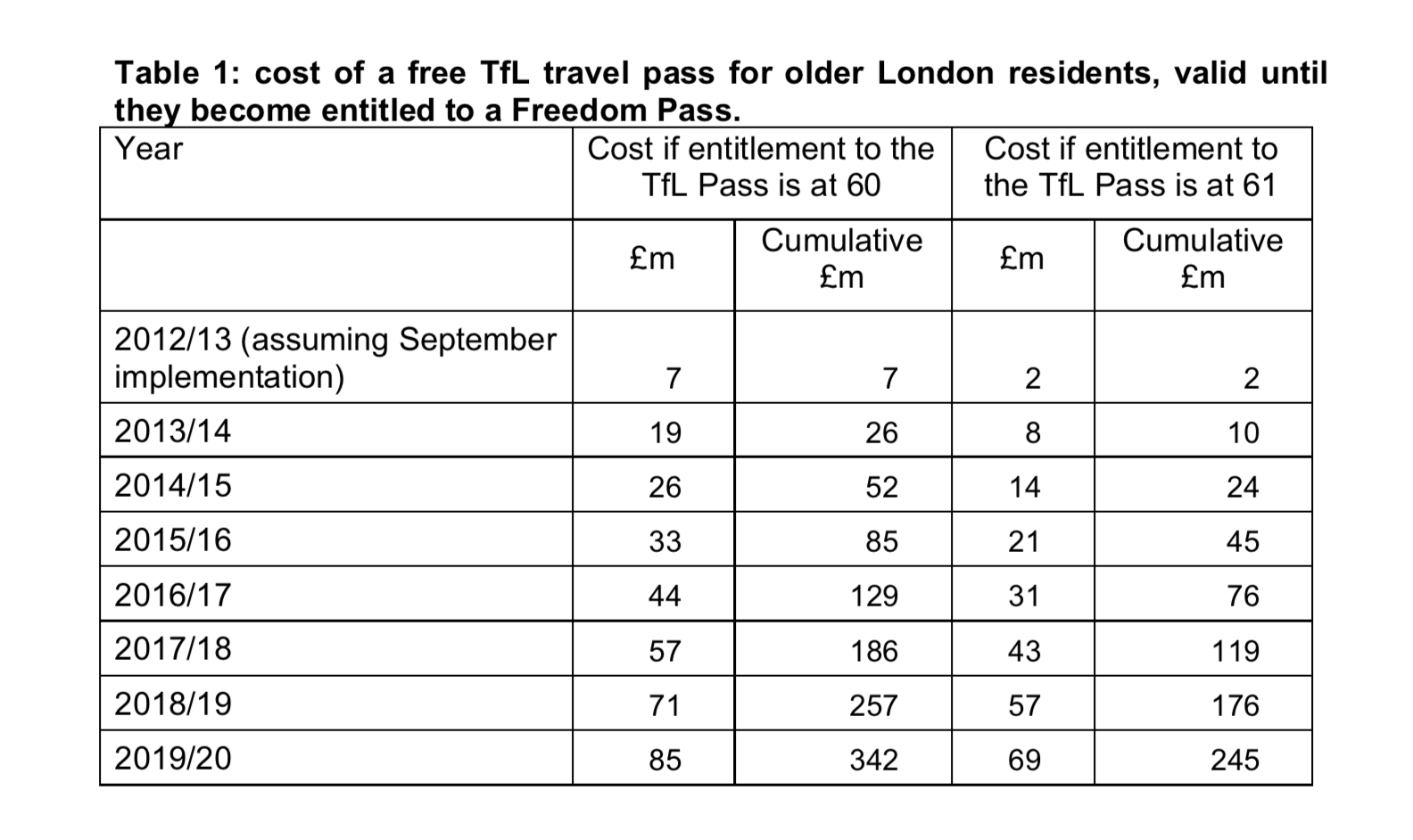 Recent TfL business plans have stated the cost to have turned out to be higher: £100 million in 2018/19 compared with the £71 million projected back in 2012 (a full set of those figures, plus the concession’s anticipated future costs as of March this year, are set out in the answer to a question by Caroline Pidgeon AM here).

How much is £100 million a year or so in the greater financial scheme of things? TfL’s business plan for 2019/20, the year before the pandemic, put its income at £10 billion, with half of it coming from fares (page 13). Looked at that way, £100 million or so foregone out of around £5 billion seems quite small beer.

That said, should preserving it – perhaps through a special mayoral Council Tax, perhaps from the recently increased income from the Congestion Charge, as suggested in the latest bailout settlement – be a priority for Sadiq Khan? During August and September of 2019, there were 381,521 active 60+ Oyster cards. How many of those people really need it, especially in view of TfL’s huge financial difficulties? For low-paid workers in poor households who commute every day, it is surely invaluable. But though I am glad of mine, I know I could manage without it.

Perhaps there is a more sophisticated way of determining who can get a 60+ Oyster card and who cannot, or could be. What we can be confident about in the short term, as the rescheduled mayoral election appears on the horizon, is that Sadiq Khan does not want to be the candidate who says he’ll do away with it, and his closest (if distant) rival, the Conservative Shaun Bailey, will be the last to advocate a measure that could alienate the older Londoners whose support he will need in order to avoid complete humiliation.

One way or another, the TfL 60+ Oyster photocard looks likely to stay for a while to come, whatever the arguments for doing away with this particular part of Boris Johnson’s London legacy.