In all the annals of Lost London is there anything more tragic than the 1951 Festival of Britain? It was not the numbers: the Festival attracted almost 8.5 million visitors in six months, far more than the Millennium event of 2000 (barely six million) and even the hugely successful 1851 Great Exhibition in Hyde Park.

It was not the content: that provided a glimpse of Eden after the travails of post war austerity. I know, I was there, and can understand why the author Michael Frayn was bowled over. “I only intended to look in for half an hour, but I stayed all day. It was absolutely ravishing.”

It was the consequences that were tragic. The Festival got mixed up in politics. The incoming Conservative government, led by Winston Churchill after his party’s October 1951 win, regarded it as a waste of public money by spendthrift socialists and ordered its demolition. 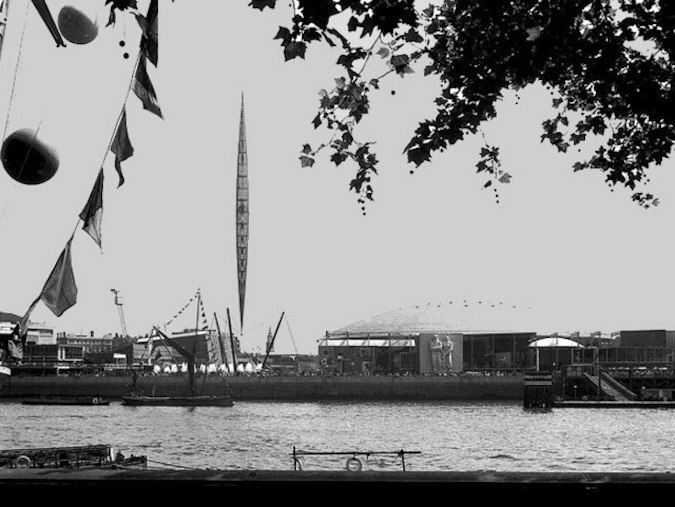 Unlike the superstructures of the 1851 Exhibition and the Millennium Dome, all traces of the iconic features of the 1951 event were quickly dismantled except the Royal Festival Hall. Can you believe it? They were sold as scrap. What a tragedy.

And what features! The Dome of Discovery – the biggest dome in the world at the time, pictured at the top of this article – and the Skylon – a huge cigar-shaped sculpture that appeared like a rocket suspended in mid take-off, pictured above – were icons then and would have been in the vanguard of modernism today. And in the background, the very tall Shot Tower, which made shot pellets out of falling molten lead, was a living example of the industry that once dominated the Lambeth side of the Thames.

It is a salutary reminder that, however impressive they were at the time, such exhibitions are usually remembered by posterity because of their infrastructure rather than for their inevitably forgotten content. The destruction of the Skylon and the Dome have rightly been singled out as major acts of cultural vandalism. Think of that when next you step across Jubilee Gardens near the London Eye, which occupies the footprint of the lost Dome.