London’s official transport watchdog has called on Transport for London to take “urgent action” to address a fall in the average speed of bus services around the city, along with a related decline in the number of bus passengers.

London TravelWatch, an independent body funded and supported by the London Assembly, has produced a five-point plan to increase bus speeds, which have fallen below nine miles per hour for the first time ever according to TfL performance data.

The measures proposed are:

Buses are by far the most-used form of public transport in London, with 2.2 billion journeys made on them every year – about 40 million a week – compared with 1.4 billion on the Underground. 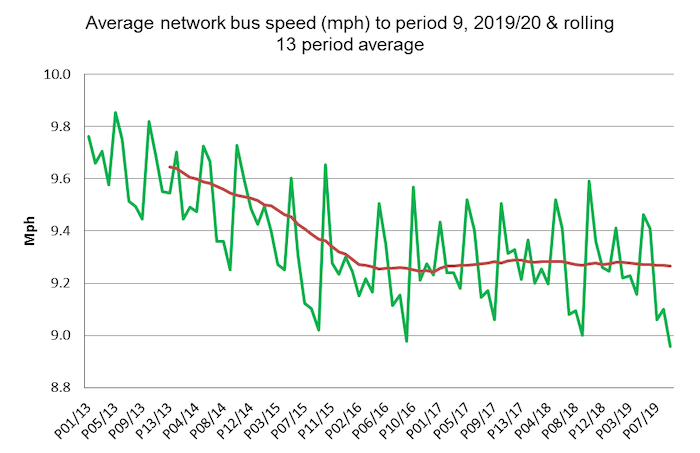 A review of bus services has seen some routes axed, a new one introduced and several others altered in length and frequency. There has been some shift of capacity to Outer London but an overall loss of seven per cent of total mileage across the city.

London TravelWatch chair Arthur Leathley emphasised that “many people have no alternative transport” to the bus while slower services have become “a real deterrent” to using them which will see a continuation of the fall in bus passenger numbers seen in the past five years.

Nick Biskinis of the Clapham Transport Users’ Group said that the Number 88 has frequently become stuck  of Vauxhall Bridge Road in recent years, leading to more overcrowding and slower journeys, with “disabled people in particular being penalised by the de-prioritisation of buses”.

In an autumn 2018 interview with On London, John Trayner, boss of London’s biggest bus operator Go-Ahead, expressed fears that the success of the London bus service was in danger of being forgotten and that cuts to the network would start to break it up and accelerate its decline.

OnLondon.co.uk exists to providing fair and thorough coverage of London’s politics, development and culture. It depends on donations, including from readers. Can you spare £5 a month (or more) to help the site keep going and growing? If so, follow this link. Thank you.