If you walked along Clerkenwell Road at onset of the 20th century couldn’t have missed the UK office of Kodak, the company that was once synonymous with photography. You couldn’t miss it because the signs on the outside of the building, spelling out “KODAK” in bold capitals, wouldn’t have let you. The small bright white ones in the picture above look as if they have been superimposed in what we would today call a photoshop operation, but there is no doubt that the frontage caught the eye.

Kodak was good with words as well as pictures. The corporate motto, “You press the button, we do the rest”, also emblazoned on the building, was a brilliant bit of wordplay which any modern advertising agency would be proud of.  Then there is the company name itself. That was the work of its American proprietor and creator George Eastman. It was a confected name that didn’t mean anything, but it was easy to say and, unlike other brands, began with a sharp, incisive “K”.

The UK’s first Kodak factory was opened in Harrow in 1891, but Clerkenwell soon became the centre of its operations. In 1898 its head office and wholesale depot moved from Oxford Street into new luxury offices at what was then 43 Clerkenwell Road, which, unusually at the time, also had a swanky customer service centre. The move was partly to make use of a ready supply of skilled jewellers and watchmakers, many of them immigrants, who were well able to build Kodak’s stereoscopic and folding pocket cameras.

Three years later, in 1901, Kodak also took over what was then Number 41 Clerkenwell Road from tobacco retailers Salmon and Gluckstein, which reckoned to be the biggest such operation in Europe. One of the Gluckstein family went on to found the amazingly successful J Lyons catering empire. The Salmon and Gluckstein shop was merged into Kodak’s building a year after the purchase. The street was also renumbered, as the photo above shows.

Kodak left Clerkenwell in 1911 for new offices in Kingsway. Its former premises were, as shown below, taken over by another American company, Murrays, which made a wide variety of confectionery (though not Murray Mints!). The building has since been demolished. 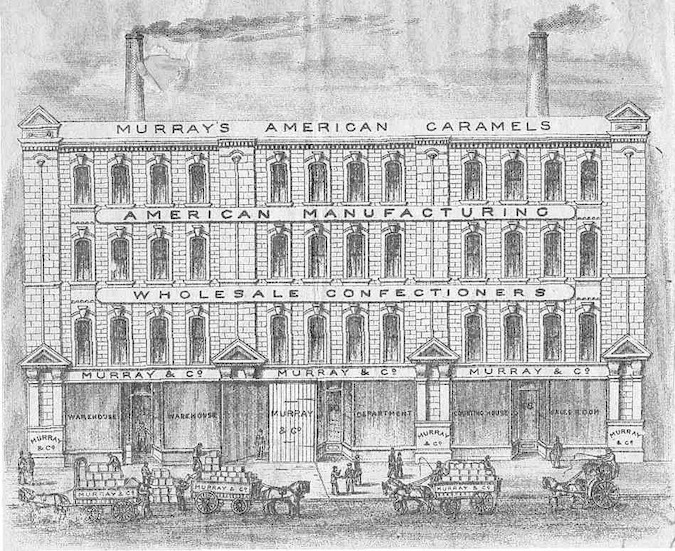 Today, it can be hard to appreciate how dominant Kodak was. Eastman patented the process of photographic film being stored in a roll in 1884, and in 1888 perfected the first camera to exploit his invention. As recently as 1976 Kodak commanded 90 per cent of the sales of films and 85 per cent of cameras in the US.

It must have seemed to Kodak that its success would go on forever, but it hadn’t planned well enough for what became its nemesis – the digital revolution. Although it claims to have developed the first self-contained digital camera, like so many other industries it failed to see the how totally disruptive to its operations digital would be. To cut a long story short, in January 2012 it filed for Chapter 11 bankruptcy protection in New York. Sadly, the second half of that famous slogan – “You press the button, we do the rest” – had become redundant.

This article is the 24th of 25 being written by Vic Keegan about locations of historical interest in Holborn, Farringdon, Clerkenwell, Bloomsbury and St Giles, kindly supported by the Central District Alliance business improvement district, which serves those areas. On London’s policy on “supported content” can be read here.