The name Matilda is best known these days as that of the hit musical staged at the Cambridge Theatre at Seven Dials, which used to be part of the decadent St Giles rookery. But it is another Matilda to whom the area is most indebted – Matilda, wife of Henry I and Queen Regent in his absence, who, in 1101, established a leper colony in what were then open fields. The chapel built there eventually morphed into the church of St Giles-in-the-Fields, following the Dissolution of the Monasteries in the 1540s, and lent its name to a St Giles district that has witnessed an astonishing series of ups and downs.

It was reckoned to have been the earliest victim of the 1665 outbreak of plague, the terrible effects of which were encountered by Samuel Pepys when he passed through the parish. The area was also badly hit by the cholera epidemic of 1848, by which time St Giles had become one of the most notorious – but by no means the only – rookery in London.

Death has also visited St Giles in a more macabre way. During the 15th century, the gallows that had been at Smithfield were moved to where today’s Flitcroft Street meets St Giles High Street and remained there for well over 100 years, uncomfortably close to a church which was supposed to be saving souls.

At the Churchyard gate, the condemned criminals were offered a bowl of ale, the so-called “St Giles’s Bowl”, as their last refreshment in this life – one of the supposed origins of the phrase “one for the road”. Anthony Babington and his co-conspirators in the Babington Plot were the last to be hanged and disembowelled there in 1586 for plotting to assassinate the Protestant Elizabeth I in favour of the Roman Catholic Mary, Queen of Scots. The gallows were later moved to Tyburn (today’s Marble Arch), but those executed there continued to be buried at St Giles.

Over the centuries, St Giles had become truly cosmopolitan. Evidence of Irish immigrants can be traced to the 1620s, and of Greeks and Armenians to the 1640s. The area also attracted a large number of Huguenots escaping persecution in France. Many of these new arrivals came seeking work and protection from unrest and persecution in their homelands. In 1675, it was noted that, “the poor do daily increase by the frequent resort of poore people from several countries and places, for want of due care to prevent the same”. In 1710 it was noted that “a great number of the inhabitants of St Giles’s are French Protestants”.

That was the backdrop to William Hogarth’s 1751 masterpiece of social degradation Gin Lane, when there were reckoned to be over 500 gin shops in an area of 3,000 houses. For this, we have to thank the accession in 1688 of William of Orange, whose government – and subsequent ones – actively encouraged gin drinking and distilling as an alternative to brandy imported from France, with which England was in continuous dispute. Around 1690, the law was changed so that – believe it or not – anyone could start a gin distillery and taxes were also reduced.

Improvements came, yet by the 19th century St Giles was still a notorious slum. A survey of the rookeries in 1849 – following fresh arrivals of Irish immigrants escaping the potato famine – revealed that between 50 and 90 people found nightly accommodation in some four-roomed houses. There was a very high death rate in the parish, with 190 burials in July 1840, and 1,856 for the year as a whole.

In 1847, the construction of New Oxford Street, joining Oxford Street and High Holborn, blasted its way through the northern end of the old slums, clearing the dilapidated houses above to the north of the church. This improved east-west communications but, perversely, at the cost of displacing more poverty stricken residents who had lost their accommodation and had nowhere else to go. It is sobering to be reminded that in 1851, when England was celebrating its global industrial success at the Great Exhibition down the road in Hyde Park, 24 people were living in a typical house in St Giles, and in some cases over 100. 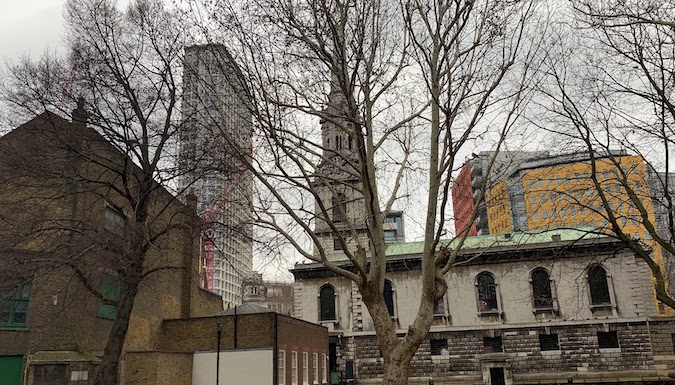 One of the ironies of St Giles is that, despite being notorious in contemporary art and literature for its drunkenness, poverty and licentiousness, it also attracted creative people and aristocrats, who often lived surprisingly close to the poor. Church records dating from 1733, when the current church building was consecrated, show that there were still many aristocratic residents in the parish.

Cecil Calvert, the 2nd Lord Baltimore, is memorialised as one of those buried there. He founded the North American province of Maryland, named after Henrietta Maria, wife of Charles I, who had provided his father with the land. Baltimore didn’t actually go there, delegating the governorship of the place to his younger brother Leonard.

The handsome galleried interior of the church is rich in history, including the graves of Andrew Marvell, poet and politician, who wrote the wonderful To His Coy Mistress, and of George Chapman, whose translation of Homer had John Keats in thrall yet died in poverty. The children of Lord Byron (1788 –1824) and Percy Bysshe Shelley and Mary Shelley were baptised in the font. There is also a pulpit from which John and Charles Wesley preached.

Today’s St Giles in-the-Fields is Anglican and the third to have been built on the site. Flitcroft Street takes its name from its architect, Henry Flitcroft. It not only administers its religious duties but also reaches out to the street homeless, working with specialist charities such as St Mungo’s, Quaker Homeless Action, Alcoholics Anonymous and Narcotics Anonymous. A café and lending library are available for these rough sleepers, together with other facilities.

Social conditions today are a far cry from the degradation the church has seen in the past, but can still be dreadful and a constant reminder of problems that never go away.

This article is the seventh of 25 to be written by Vic Keegan about locations of historical interest in Holborn, Farringdon, Clerkenwell, Bloomsbury and St Giles, kindly supported by the Central District Alliance business improvement district, which serves those areas. On London’s policy on “supported content” can be read here.