The White Hart, squeezed into a corner where Drury Lane meets High Holborn, is very easy to miss. I missed it for decades, passing it regularly without a second thought. Apart from anything else, it looks too small to have anything interesting within. But when you go inside you find a large, friendly pub with a fascinating backstory.

It is not often you can drink in a pub once owned by Henry VIII, but that is a minor part of its heritage. Its biggest claim is that, according to what it calls “Old Bailey archives”, it occupies a site where there were licensed premises as early as 1216. If that lineage of the White Hart (or Whyte Hart) is true – and it is not easy to authenticate – it would give the pub a strong if indirect claim to be the oldest in London, although none of the original building has survived.

The area known as St Giles was at that time a prosperous village, with inns, places of entertainment and the church or chapel of St Giles, which has been there in one form or other since 1101 when Queen Matilda, wife of Henry I, founded a leper colony there. In 1537 Henry VIII did a deal with the Master of Burton Lazars, which resulted in Henry acquiring “one messuage (dwelling) called the Whyte Harte and 18 acres of pasture”.

A survey of Crown Lands taken in 1650 refers to “the White Harte situate … in St. Gyles in the feildes … consistinge of one small hall, one parlour and one kitchen, one larder and a seller underneath the same”, and the appears on Morgan’s map of 1682 (see above) as number 101, with an alley leading to Drury Lane. 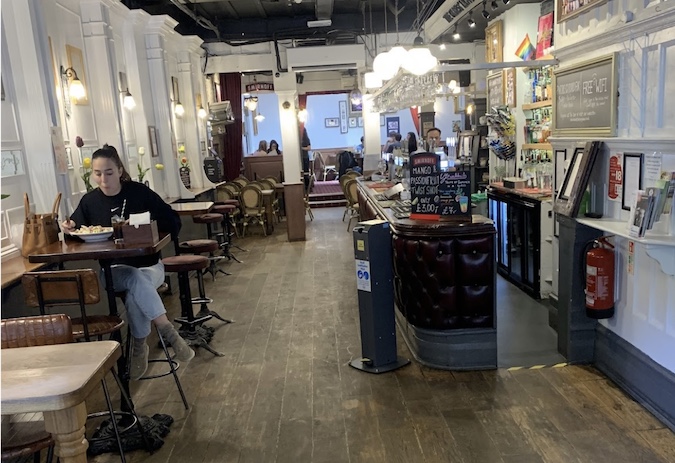 Jack Sheppard (1702–1724), the romanticised thief on whom Captain Macheath in John Gay’s The Beggar’s Opera was based, used to drink there, as, it is said, did Dick Turpin (1705-1739) who stopped for “one for the road” on his  journey to the scaffold at Tyburn.

Coincidentally, the actress Lavinia Fenton, who played Macheath’s wife Polly Peachum and became the Duchess of Bolton, actually lived in a coffee house on the lane – a curious case of fact meeting fiction. Nell Gwyn, the self-styled “Protestant Whore” of Charles II sold her wares on this street for a while, though at a different time from Fenton’s period of residence.

In the 17th Century Drury Lane was a fashionable street, but in the 18th it declined into one of the worst slums in London, known for drunkeness, highwaymen, prostitutes and gin addiction. Social conditions were so bad that the Great Plague of 1665, which killed 15 per cent of the population of London, is believed to have started in nearby Stukeley Street after Flemish weavers opened goods arrived from Holland. A Travelodge hotel stands on the spot today, almost opposite the White Hart. The site also once housed stables for the brewery group Combe and Co.

In the 19th Century the White Hart played a bit part – for good or ill – in changing the world. It was there that the Communist League had its headquarters for a while. Karl Marx gave lectures there in 1847 before attending the second congress of the League. The pub was a short walk from Marx’s second home, the reading room of the British Museum, then based at Montague House, (top left of the map above).

For two years Marx and his colleague Friedrich Engels, both of them young men at the time, took part in discussions at the White Hart and in 1848 presented the Communist Manifesto, just published in Bishopsgate, in its upstairs hall. The page proofs of the manifesto were apparently prepared at the pub before being delivered to the printer. The rest, as they say, is history. Communism has moved on since then, but the White Hart – maybe it should be called the Red Hart – remains one of London’s most fascinating pubs.

This is the 25th and final article in a series by Vic Keegan about locations of historical interest in Holborn, Farringdon, Clerkenwell, Bloomsbury and St Giles, kindly supported by the Central District Alliance (CDA) business improvement district, which serves those areas. On London’s policy on “supported content” can be read here. It’s been a pleasure doing business with CDA.