Skip to content
It was the scene of a murderous jailbreak attempt in the late 19th century, though the site would later have happier associations
Victor Keegan

All of London’s notorious prisons from bygone days have thankfully been closed, but most have left indelible marks. Westminster Cathedral is built on the foundations of the jail which preceded it. The Old Bailey contains remnants of the walls of Newgate prison, upon which it was built. Parts of the Fleet prison have been found in Farringdon Road. Tate Britain stands on the spot once occupied by Millbank Penitentiary. But none of these remnants are as well preserved as the underground cells of the Middlesex House of Detention, otherwise known as Clerkenwell prison.

None of this is obvious when you visit Sans Walk, the narrow passage where one of the prison’s perimeter walls was located. Today the site is all offices and apartments, but the remains of the cells have been remarkably well preserved (see below), making them a popular location for fashion and design shows. However, it is difficult to think about them without conjuring up thoughts of the darkest days of the prison, which still reverberate within its sullen walls. 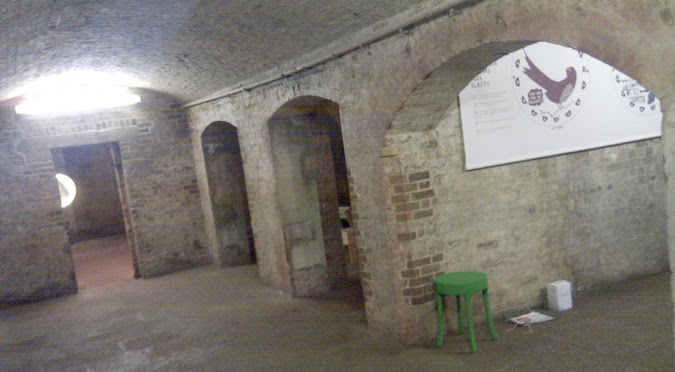 In December 1867 it was the scene of a reckless attempt to free two Irish republican prisoners, the Fenians Ricard O’Sullivan Burke and Joseph Casey, involving an explosion which sent shock waves across London. The authorities had learned in advance of a possible escape plot after a policeman on duty outside the prison became suspicious of a woman and a man he saw frequently conversing the previous day. Precautionary action was taken, including moving Burke and Casey to a more secure part of the building.

The blast, which was likened to a discharge of artillery, happened at a quarter to four in the afternoon. It shattered nearby houses and over 60 feet of the north perimeter wall (image below), and could be heard for miles around. Accounts of the number of casualties vary, but between six and 12 people were killed, many of them passersby, and over a hundred were reported injured. 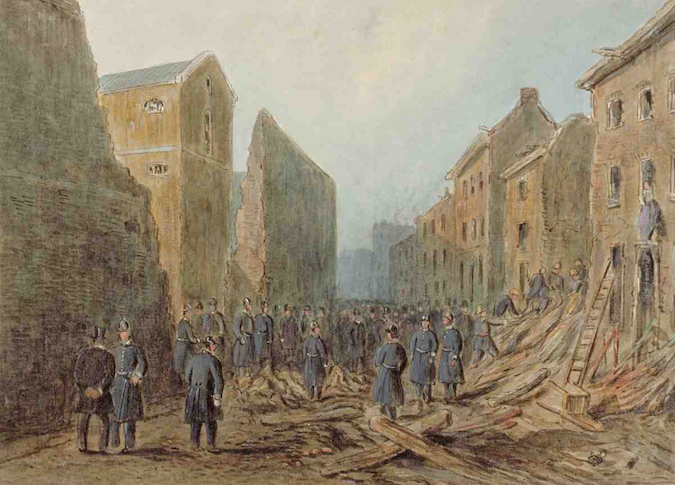 No prisoners escaped and neither did one of the culprits – Michael Barrett from County Fermanagh. He and five others were tried before a jury at the Old Bailey in April 1868. Two defendants were acquitted on the instructions of the judge and, after sitting for 2½ hours, three others were acquitted by the jury. But Barrett was convicted of murder and hanged on the morning of Tuesday 26 May 1868 outside Newgate Prison. He was the last man to be publicly executed in that way.

The House of Detention was established on the site of two previous prisons. One of these, the Clerkenwell Bridewell, closed in 1794, with its operations incorporated by a jail at nearby Coldbath Fields, where the Mount Pleasant sorting office is today. The other, called the New Prison, was rebuilt to become the Middlesex House of Detention, which lasted until 1886.

In its place, the London School Board built its biggest and most expensive educational establishment, which was opened by the then Prince of Wales – highly unusual for a mere school. But what to call it? Should it have a mundane name with local significance, as most schools did, or something special?

The board decided on the latter, and the school was named after Hugh Myddelton, a city grandee who had been mainly responsible for creating the New River, which brought fresh(ish) water to this part of London from Chadwell, 28 miles away. Four hundred years later it still supplies London with nearly 10 per cent of its water. The New River was seen at the time as a kind of act of purgation, as if the link with water would wash away the site’s dank memories, even though many of the original cells remained under the floor of the school. And still do today.

This article is the 23rd of 25 being written by Vic Keegan about locations of historical interest in Holborn, Farringdon, Clerkenwell, Bloomsbury and St Giles, kindly supported by the Central District Alliance business improvement district, which serves those areas. On London’s policy on “supported content” can be read here.