If you are walking past Sadler’s Wells Theatre in Clerkenwell towards the centre of town you are unlikely to give the buildings next door to it a second glance. Yet they are the remains of an engineering project which, over 400 years ago, arguably did more to improve life in London than any other.

The HS2 railway project will cost around £80 billion to produce a comparatively modest reduction in journey times from London to Birmingham. By contrast, the New River Company’s 28-mile long canal from Chadwell Springs in Hertfordshire to this location in the capital saved thousands of lives and reduced illnesses in London by bringing relatively fresh water to Londoners in place of that of the polluted Thames.

It wasn’t the first scheme of its kind: during the 13th century clean water from the Tyburn river was carried from upstream to the City via a conduit. The difference is that the New River, which opened in 1613, still provides a significant amount of London’s drinking water.

These days the canal stops at Stoke Newington – though some “heritage” parts can still be seen and walked beside in Canonbury – but it used to terminate next to where the dance theatre now is at New River Head. There are plenty of reminders of this heritage there, not least one of the entrance shafts to the 50-mile long ring main water system, (photo below) which is visible from Amwell Street.

There is also the stub of a windmill, the engine house and the remains of reservoirs which were part of a site that once covered seven acres. A large building on Rosebery Avenue used to be the headquarters of the New River Company and later Thames Water has, like other former water company buildings around it, been converted into flats. 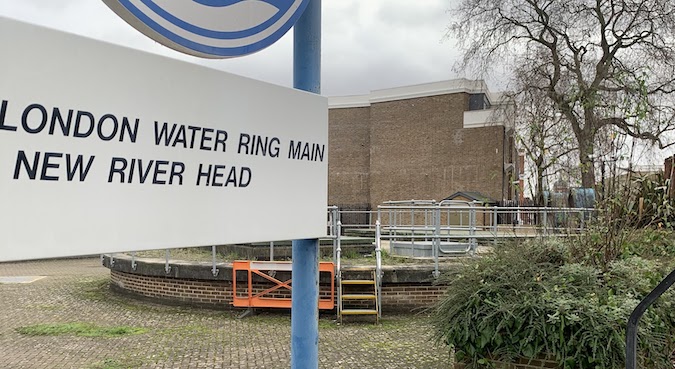 The New River project began in 1600 when Captain Edmund Colthurst had the bright idea of bringing water to London at a time of widespread pollution. He started the work at his own expense but ran out of money after completing three miles, at which point Sir Hugh Myddelton, a City grandee, took over until he too ran short of money.

The risk-averse City was reluctant to provide support, but the river was rescued by no less than King James I who, in 1611, agreed to meet half the cost in return for half of the profits. In its way this was a prototype of the private-public sector deals which have built so many schools and hospitals in recent years, though at considerable cost.

Unlike HS2, the artificial river was a low energy endeavour because gravity took the strain: the water flowed downhill into London through terrain that dropped by five inches every mile. The expense came from having to hire hundreds of labourers to dig the channel, which was ten feet wide by four deep, over a four-year period. There was also the usual opposition from Nimbyish landowners, who objected to the canal going through their land, to contend with.

The new waterway’s completion was officially marked on Michaelmas Day 1614 when a gathering of the great and the good rode to the cistern in Islington to witness the flow of water accompanied by at least 60 labourers carrying spades and pickaxes, each wearing one of the ubiquitous green Monmouth caps that had swept the country.

When the speeches had finished the floodgates flew open and the new stream flowed into a reservoir built on the site of a ducking pond. Most of the vast infrastructure, including all the gravity-fed wooden pipes delivering the water to consumers all over London, has now gone.

The best way to absorb what the New River is all about is to walk behind Sadler’s Wells to the end of Myddelton Passage – whose brick wall is the last surviving section of the site perimeter as it was in 1806 – where, as long as volunteers have opened the gate, there is a fascinating amount of information about the history of the project.

There is a viewing platform whose position is marked the yellow “x” is on the engraving shown above (main image). From there one can get good glimpses of this extraordinary project. It does not, of course, compare with the grandeur of, say, the Great Pyramid or Stonehenge. But in terms of the social good it continues to do there is no comparison.

There is a pathway along the canal, the New River Walk, which can be followed all the way from Islington to Chadwell Springs or vice-versa.