Hiding behind the gatehouse and wall of the Charterhouse, located between the Barbican and Smithfield on Charterhouse Square, lies one of the capital’s least known and most magnificent medieval gems.

The surprise is that it is there at all. A remarkable amount of the original Charterhouse building, a monastery for Carthusian monks built in 1371 on land which had seen over 50,000 burials during the Black Death of 1348, has survived later plagues, aristocratic reconstructions, bomb damage in the Blitz and, above all, the Dissolution, which saw many monasteries sold off to Henry VIII’s cronies, who often pulled them down.

All the others – such the the Blackfriars and Greyfriars monasteries and the Priory of St John, along with St Mary‘s Nunnery – have been lost almost without trace, leaving remnants within Westminster Abbey as the only other parts of a monastery from the medieval era above ground.

Charterhouse’s longevity may be partly thanks to its being acquired in 1545 by Sir Edward (later Lord) North, following the monastery’s dissolution in 1537. North had been Chancellor of the Court of Augmentations, and was therefore responsible for selling monastic land and properties. He pulled down parts of the Charterhouse complex, including its church, some cloisters and other reminders of Catholicism, building in their place a beautiful Great Hall and adjoining Great Chamber, which are star attractions of the Charterhouse today. But he also left much of it standing.

The property’s next owner was Thomas Howard, 4th Duke of Norfolk – later executed for his part in the Ridolfi plot to put Mary, Queen of Scots on the throne – who transformed the remains of the religious house to complete a magnificent mansion, fit to entertain royalty. And so it did: Elizabeth I and James I both held court in the Great Chamber. 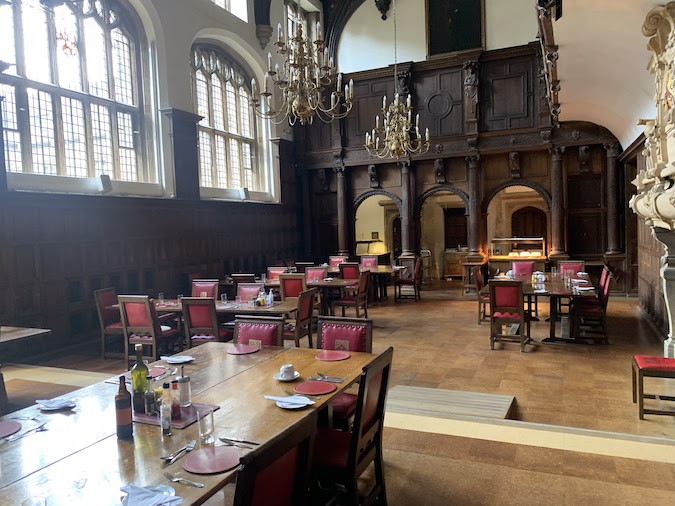 Today, the Great Hall (above), which looks as if it has been stolen from an Oxbridge college, provides meals for the Charterhouse’s community of residents – its Brothers and Sisters, single people aged over 60 in financial and social need who live in the almshouse there. The Charterhouse is still a charity and any lay person can apply to be a Brother or Sister, as long as they meet the requirements of age and pecuniary circumstances. They can then occupy a building covering most of the footprint of the old monastery.

There have, of course, been changes additions to the original monastery fabric – including a long terrace added by Howard known as the Norfolk Cloister – but parts of the monks’ quarters are just as they were, and much original stone was probably re-used when alterations were made.

The Carthusians, in a sense, lived a privileged existence. They took a vow of silence, and their clothing “consisted of two hair-cloths, two cowls, two pairs of hose, and a cloak, all of the coarsest manufacture, contrived to almost disfigure their persons”. However, their cells were more like cottages – two storeys high with four rooms, complete with a garden and fresh water piped from local sources at a time when the rest of the population had to battle with polluted water.

The Carthusians were known as “good monks” as they didn’t succumb to worldly temptations like some other orders (though, curiously, today’s  monastery is next door to a Malmaison hotel). Their goodness reached unscalable heights when they refused to recognise Henry VIII as head of the Catholic Church. The prior, John Houghton, and six others were hanged, drawn and quartered. Houghton’s head was severed and affixed to London Bridge as a warning to others and a limb impaled on the gatehouse of the monastery.

The Norfolk cloister (below), which used to be twice as long as it is now, is one of the delights of the Charterhouse. It still harbours one of the original monk’s cells, complete with stone serving hatch 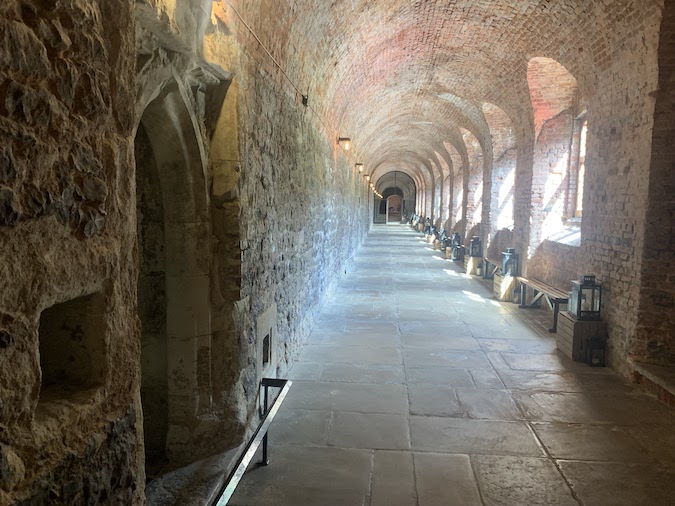 This cloister was later used for playing football by the boys of the original Charterhouse School, built in 1611. The Charterhouse claims, with some justification, to have played a leading role in creating the rules of the game, including the offside rule and skills such as the art of dribbling, which was honed among the confined cloisters. As Simon Inglis points out in his marvellous book Played in London: “If the ball exited through one of the [cloister] openings, the first player to leap out and ‘touch’ it won the right to throw it back in.”

It would need a book to chronicle all the famous people who have passed through The Charterhouse. They include Thomas More, John Wesley, William Makepeace Thackeray, Prime Minister the Earl of Liverpool, Simon Raven and Roger Williams, the founder of Rhode Island . There is also a rolling cast of aristocrats, but it was a member of the nouveau riches who left the biggest mark on these hallowed remains.

Thomas Sutton was the richest commoner in Britain. He purchased the Charterhouse in 1611 as a home for his almshouse and the school, which later relocated to Godalming. Sutton died soon becoming the owner, but the Charterhouse rapidly became the wealthiest institution of its kind in Europe. It aimed to prove the superiority of Protestant good works over Roman Catholic practices.

Sutton started his working life as the servant of two powerful aristocrats in Tudor England and ended up so rich he lent money to them. Where did it come from? He owned the biggest coal mines in the north-east of England in County Durham and as a moneylender charged  as much as 10 per cent in interest. Nonetheless, Daniel Defoe, author of Robinson Crusoe, praised Sutton’s endowment as “the greatest and noblest gift that was ever given for charity.”

Following further restoration, The Charterhouse is now open for bookable tours. There is also a lovely bijou museum you can visit free of charge and a learning centre.

All photos by Vic Keegan.

This article is the fourth of 25 to be written by Vic Keegan about locations of historical interest in Holborn, Farringdon, Clerkenwell, Bloomsbury and St Giles, kindly supported by the Central District Alliance business improvement district, which serves those areas. On London’s policy on “supported content” can be read here.