Football in London can be traced back at least as far as 1170 when a visitor, William FitzStephen, noted that “after dinner all the youths of the city goes out into the fields for the very popular game of ball” and that every trade had its own football team, and also its  own rules size of ball.

Over 500 years later football was being played in London streets as well as its fields, apparently without any rules or any care for property or people. John Gay’s classic 1716 poem Trivia, about walking in London, vividly recounts a wild game in Covent Garden.

“I spy the furies of the foot-ball’d war:

The ‘prentice quits his shop to join the crew;

Thus, as you roll the ball o’er snowy ground,

The gath’ring globe augments with every round. . . . .

But whither shall I run? The throng draws nigh!

The ball now skims the street, now soars on high;

And jingling sashes on the penthouse sound.”

The game as described by Gay would almost certainly have rumbled and tumbled its way on past the site on Great Queen Street just south of Holborn where, in 1775, the Freemasons’ Tavern was built. Unknown to the contemporary players, that pub (pictured above) would be the place where the game of football was changed forever.

It was there on 26 October 1863 that an embryonic Football Association (FA) met to begin drawing up rules for the game, which eventually led to football being the most popular sport in the world. After half a dozen meetings, the association, which included a number of teams and one school – Charterhouse, a football pioneer – the first comprehensive rules were agreed.

There was one important dissenter. As Simon Inglis records in his magisterial Played in London the first FA treasurer, the representative from Blackheath, withdrew his club from the association over the removal of two draft rules: “the first allowed for running with the ball in hand; the second for obstructing such a run by hacking (kicking an opponent in the shins), tripping and holding.”

Other English clubs followed this lead by not joining the FA. Instead, in 1871, they formed the Rugby Football Union. Two sports that became global phenomena had been spawned in the same Holborn hostelry. Who says you can’t have a productive debate in a pub?

Would the inaugural FA rules work? What was regarded as the first “unified” match played in accordance with them took place on 9 January 9, 1864 at Battersea Park between  Sheffield FC, one of the first clubs to draw up its own rules, and a team called London City. 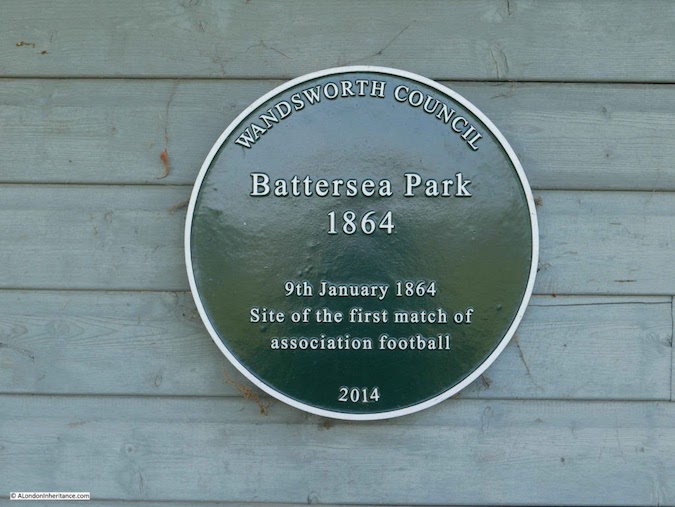 Reports suggest that the game’s scoring system included “touchdowns”, a feature later limited to try-scoring in rugby. It also appears to be the first time that “butting” the ball with the head took place, a practice of the Sheffield team that apparently prompted laughter among the London players. It doesn’t seem so funny now.

Thus began one of England’s greatest gifts to the world. Shame we didn’t take out a patent. The Freemasons’ Tavern was demolished in 1909 and replaced by the Connaught Rooms which still grandly stand today. But there’s a substitute pub, the Freemasons Arms, complete with football memorabilia, in nearby Long Acre.

This article is the 14th of 25 being written by Vic Keegan about locations of historical interest in Holborn, Farringdon, Clerkenwell, Bloomsbury and St Giles, kindly supported by the Central District Alliance business improvement district, which serves those areas. On London’s policy on “supported content” can be read here.