Brunel’s Great Eastern was the one was built on the Thames. Started in 1858, it was so big it had to be slid sideways into the river from its Millwall mooring. It was not only the world’s biggest ship at the time, but it maintained that status for nearly 40 years.

The one that was broken up on the Thames was the Chatham-built Temeraire, now known universally as the Fighting Temeraire because of J M W Turner’s iconic painting (above) showing the ship being pulled by a tug boat for demolition at Beatson’s breaking yard at Rotherhithe. Local mudlark Alan Murphy assures me that the painting must have been executed at the end of Beatson’s yard, facing a bend in the river.

Turner, of course, used artistic licence to make his point. The ship was towed by two tugs, not one, and did not have such stately masts as in the painting. And it was day time when it arrived, not night time. But strict accuracy would have deprived Turner’s work of its iconic hint about the sunset of Empire. 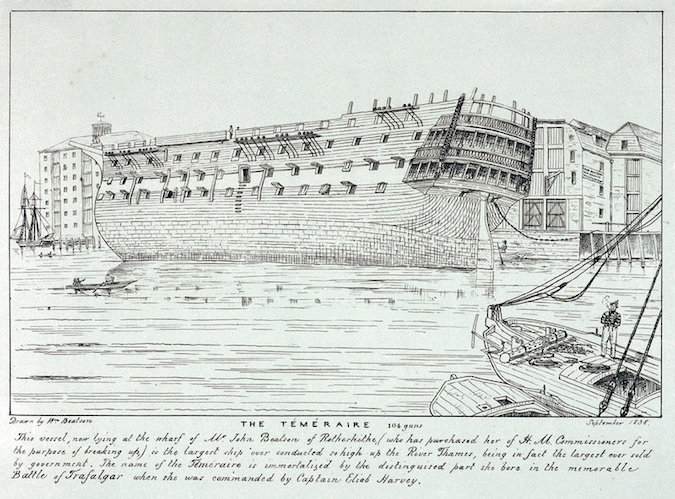 The Temeraire itself performed many roles, from a prison ship to a victualling depot, but it has a special place in history because it fought side-by-side with Nelson’s HMS Victory at the Battle of Trafalgar. Without the Temeraire being so positioned, it is possible the battle would not have been won. Like the Victory, it needed over 5,000 oak trees for its construction, many of them well over 100 years old. It was built to last. You can still see remnants of it in the form of a communion rail and two bishop’s chairs at St Mary’s Church, Rotherhithe.

But Rotherhite’s most iconic ship was neither built nor broken up there. The Mayflower, which carried the Puritan Pilgrim fathers to Massachusetts in America, set sail from Rotherhithe in 1620 for Plymouth (in England) before heading for the already established Plymouth in America, where the settlers founded a colony that became America and a key part of the British empire.

The Mayflower arrived back in England on May 6, 1621. Christopher Jones, its captain and part-owner, died the following year and is buried  in St Mary’s at the heart of old Rotherhithe. His widow, Josian, inherited the ship, which was eventually broken up and probably sold off as scrap. A full-sized replica, built in England, is being restored in America in time for the 400th anniversary of the historic event next year.

The sailing is commemorated by the Mayflower pub in Rotherhithe which, although of recent origin, looks the part and is visited regularly by American tourists to pay their homage.

OnLondon.co.uk is dedicated to providing fair and thorough coverage of London’s politics, development and culture. It depends on donations, including from readers. Could you spare £5 a month to held the site keep going and growing? If so, follow this link. Thank you.