Two years ago, the government of China purchased the second most fortified building in London as the future new home for its embassy. The Royal Mint Court site stands opposite the Tower of London – the most fortified London building of all – on a site which, for hundreds of years, housed the Royal Mint, where most of the country’s coins were manufactured, hence the fortifications. And underneath it lie the extensive remains of London’s least known abbey.

The particular monastery was dedicated to St Mary Graces, and used to be known as Eastminster to distinguish it from Westminster Abbey in the west. It was founded for the Cistercian order in 1350 by Edward III on the site of a notorious plague pit and fulfilled a vow Edward made to God and the Blessed Virgin Mary of Graces after his life had apparently been spared at sea.

If you walk around the block, starting at East Smithfield, turning left along Cartwright Street and left again along Royal Mint Street, you are walking around the space where the abbey was. Today, it is a case of “hunt the remains”. Excavations on the old Royal Mint site involving 150 people started in the 1980s. These revealed walls stretching to 76 metres surrounding a hospital, a dining hall, chapel, chapter house (where abbey business was discussed), a refectory and other buildings. 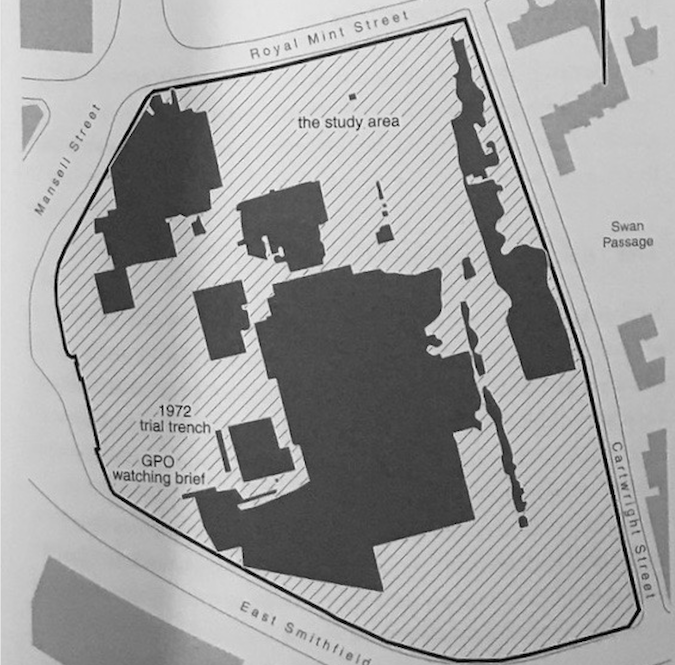 To see the preserved remains today you need to seek permission from the building’s owner – which now seems unlikely to be granted, given who the new owners are – or make do with fuzzy glimpses from the pedestrian walkway (see photo above).

The Museum of London says, rather sadly, in its book about the excavations: “Those lucky enough to see the remains…are unlikely to be able to identify them without prior knowledge. They are not signposted and do not feature in tourist guide books for either London or abbeys and monasteries.” It is a great shame that so many remains are hidden underneath new buildings in London, but at least they have been recorded and, in many cases, not destroyed.

For those interested in monasteries, this was an unusual one for the Cistercians, whose rules normally required their abbeys to be “far from the concourse of men” rather than on the edge of a city. It was the last Cistercian abbey built in Britain, but never attracted enough monks to make it a big success.

After the dissolution of the monasteries in the late 1530s, the abbey passed into the hands of a knight who completely rebuilt it, as was the habit for those who profited from Henry VIII’s sequestrations.