Skip to content
They created a bucolic scene, though not quite as idyllic as it might seem
Victor Keegan

If you felt like a glass of milk in the 1700s, Georgian London had the answer: go to St James’s Park and get it straight from a cow. The royal park had a thriving milk industry in those days, which actually survived until the early 1900s (see photo below).

Although no-one worried about air miles in those days, customers contributed to keeping transportation impacts low by buying milk straight from the udder from obliging milk maids, rather than it being conveyed in lorries from farmer to wholesaler and on to retailer. There was also less need to cut the park’s grass, as it was all done by the grazing cows. The country had come to town.

It must have been a bucolic scene, of which there is no trace today apart from Milkmaids Passage, an alleyway leading from the Green Park to St James Palace (currently closed because it runs along the wall of Lancaster House).

But as is so often the case, it wasn’t quite as idyllic as it might seem to us today. The milkmaids didn’t own the cows. They were hired from those who did – almost invariably men – who kept the cows in nearby stables. The milkmaids were paid low wages, the equivalent of the forgotten poor today who have fallen beneath the social safety nets. There wasn’t a minimum wage in those days, and milkmaids were ripe for exploitation. 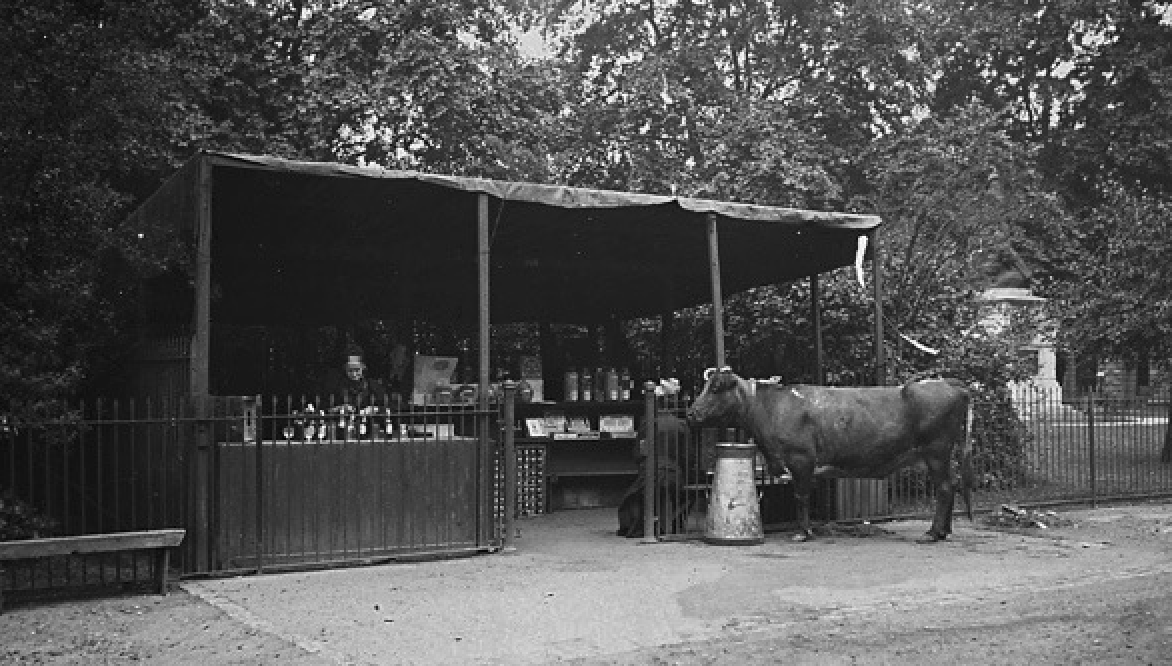 Henry Mayhew, the chronicler of London’s poor, pointed out that there was no security in the job: “As the sellers of milk in the park are merely the servants of cow- keepers and attend to the sale as part of their business, no length of notice is required.” He explained that the milk sellers obtained leave from the Home Secretary to ply their trade in the park. In the summer there were stands and numerous cows, but in the winter, cows only. On wet day, scarcely any milk would be sold.

Mayhew quotes one girl as an example: “It’s not at all a lively sort of life, selling milk from the cows, though some thinks it’s a gay time in the Park! I’ve often been dull enough, and could see nothing to interest one, sitting alongside a cow. People drink new milk for their health. They’re mostly young women…The greatest fools I’ve sold milk to is servant-gals out for the day. Some must have a day, or half a day, in the month. Their mistresses ought to keep them at home, I say, and not let them out to spend their money, and get into nobody knows what company for a holiday; mistresses is too easy that way. It’s such gals as makes fools of themselves in liking a soldier to run after them.”

Sellers were not above diluting the milk with water often from unhygienic sources In order to increase their profits. Some things never change.